As part of the continuous upgrade of the Prinsendam, the ship received 320 new cabin chairs during the call at Barcelona on 15 November 2010. The new chairs have a slightly higher back but most importantly are more fire retardant. Chief Officer Ryan Whitaker, in charge of interior maintenance, asked the agent in Barcelona whether a charity would be willing to take the 320 old chairs coming of the ship, which were still in good condition.

The charity that responded was La Nau, which specializes in collecting non-food materials for the socially excluded. Items obtained are cleaned and repaired and then forwarded to welfare organizations. Thus retirement homes, orphanages, night shelters, etc., will now all benefit from our gift. As can be seen from the photos, Housekeeping and the Deck dept. set up a system whereby the old chairs were removed from the cabins and unloaded in the morning and the new chairs loaded and brought to the cabins. Before departure all guests had a new chair to sit on. The carton was recycled on the dockside at the same time and thus did not have to come on board. 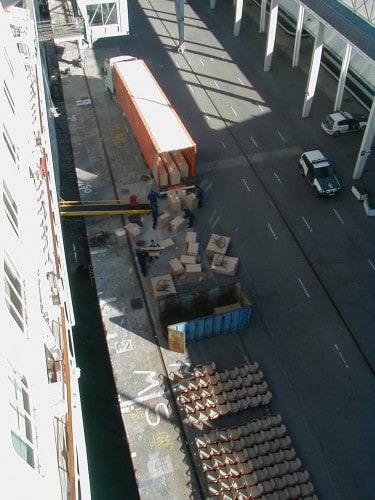 Albert Schoonderbeek is master of Prinsendam.