It was a busy day in Eidfjord with two ships in. As there is only one dock, the Pacific Princess of Princess Cruises had to go to the anchorage. As there is not much of an anchorage, the fjord is very deep everywhere near the port, she stayed on the engines. For most guests an unusual sight because as she was drifting she did not stay in the exact same position all the time. Which made one of the guests wonder if the captain was drunk. In the old days we would have probably just said yes but as Princess Cruises is now our sister company, we are friends and do not stoke the fire anymore, and thus the guest received a truthful and detailed answer from one of the officers. We docked because we were the biggest one in port today, so it made sense to inconvenience as few guests as possible with a tender ride. The PP carries about 800 guests which is less that our total crew count.

When the ships are nearly the same size, when together in a port with limited docking space, then the pecking order changes. Preference is then given to the ships which call the most often. Which here in Norway is Aida Cruises. Also part of Carnival Corporation and thus also a sister company but from a different branch. In the same way as Princess and Holland America have been teamed up, Aida has as her partner company Costa Cruises. You would think that it would make more sense to team the Dutch up with the Germans but the decision to line up the various brands in groups was not done because the officer might have a link but because the products, the Brands, are close together. Both Aida and Costa have very large numbers of Europeans on board (Aida nearly 100% Germans) and that translates into similar ways of approaching the operations. Regardless whether it is with a German flavor or with an Italian flavor. (Bratwurst or Gelato??) As Holland America and Princess draw most of their clientele from North America, the logic is there as well.

Germany has a population of around 83 million people but has a very high percentage of cruise interested people, more than most other countries. And they are very interested in going to Scandinavia or the Nordland as they tend to call it. And they have been doing that for a very long time. When other company’s still had to discover that going to the fjords was interesting, the German shipping companies were already there. With the first ships calling as far back as the 1890’s. For more details have a look on this blog site under the drop down box Of Days Gone By. There is a story about the first REAL cruise ship ever built and one about the first real MASS market cruise ship. Both German, both going to the Fjords. 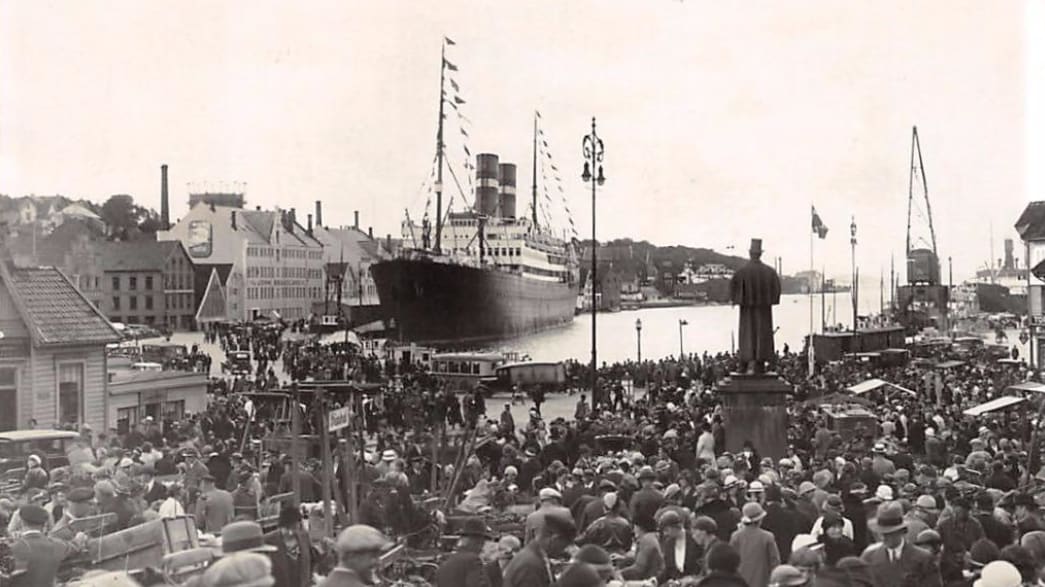 The ss Rotterdam in Stavanger Fjord. She is seen here docking in almost the same position as the Koningsdam last cruise. The KODM was a bit further back. The white buildings are still there and now house the Stavanger Maritime Museum. Those were the days that a cruise ship called and the whole town came out for a look.

Holland America went to the Fjords for the first time in 1933 with the ss Rotterdam (IV) and then popped up occasionally with the Veendam and the Volendam. But most of the “North land” trips were made by passenger ships from the company’s from Amsterdam as their ships were smaller and easier to fill. After the 2nd world war our ships returned but mainly on long cruises from the USA. It was not until the expansion from Holland America into the S Class that Scandinavian ports appeared regularly on the schedule. 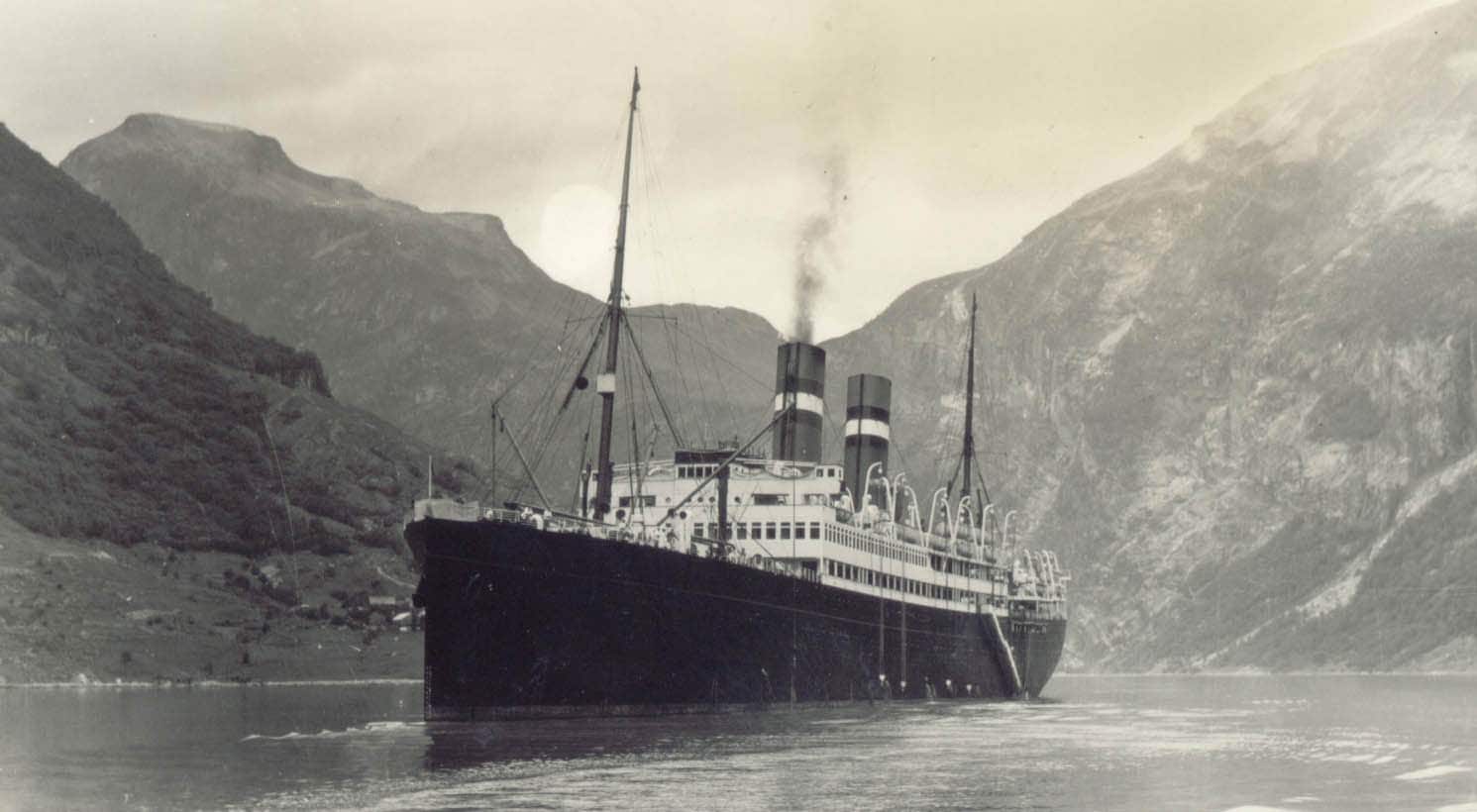 The ss Volendam at anchor in Geiranger Fjord. She is also just floating due to the deep anchor ground. We will be in the exact same position the day after tomorrow.

We stayed in Eidfjord from 0700 hrs. until 15.00 hrs. under an overcast sky with the occasional rain shower. Tonight it should really belt down (although maybe not where we are as there are everywhere mountains in the way) and then tomorrow is should be a sunny but a cool day. 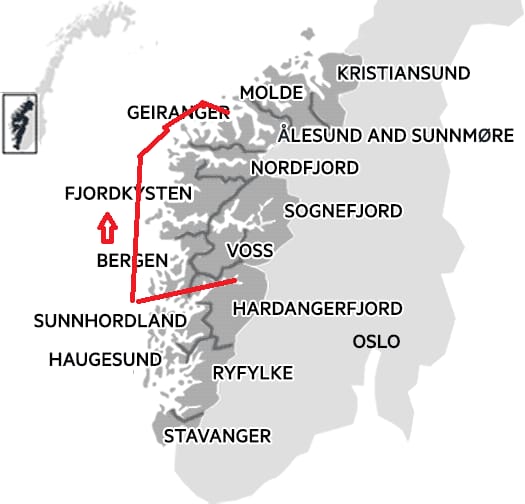 We will bypass Bergen as we will call there on the way back. Alesund is at the entrance of Geiranger fjord so we can make the call at Alesund a long one and we will be staying until 23.00 hrs.

Tomorrow we are in Alesund and to get there we have to race all the way out again, dip into the Norwegian Sea and then hop back in again. That going back is only 10 miles as Alesund is very close to the ocean. If all goes well we should be docked by 08.00 hrs. We will be together with one other ship, the Independence of the Seas but Alesund has some large docks with room for 3 or 4 ships so we all can dock.