Welcome to sunny Alesund. After an overcast day in Eidfjord we saw the weather back from last cruise. Sunny and pleasantly warm. Unfortunately it is not going to last. While southern Europe continues to swelter in the heat (You have to be in Paris at the moment to quickly lose weight) Norway has arrived at the edge of the sunny weather system and in the coming days it is going to look more “Norwegian” again. For Geiranger we are expecting about a 40% probability of rain and for Bergen about 60%. For Geiranger this does not mean very much as it can be on one side of the mountain or on the other side or exactly in between and then we will get it. Bergen is the rainy capital of Norway as it catches most of the rain coming in from open sea and the incoming clouds then hit the mountains which surround Bergen. But savor the day in Alesund; and we are staying late so the guests can make the best of the weather. 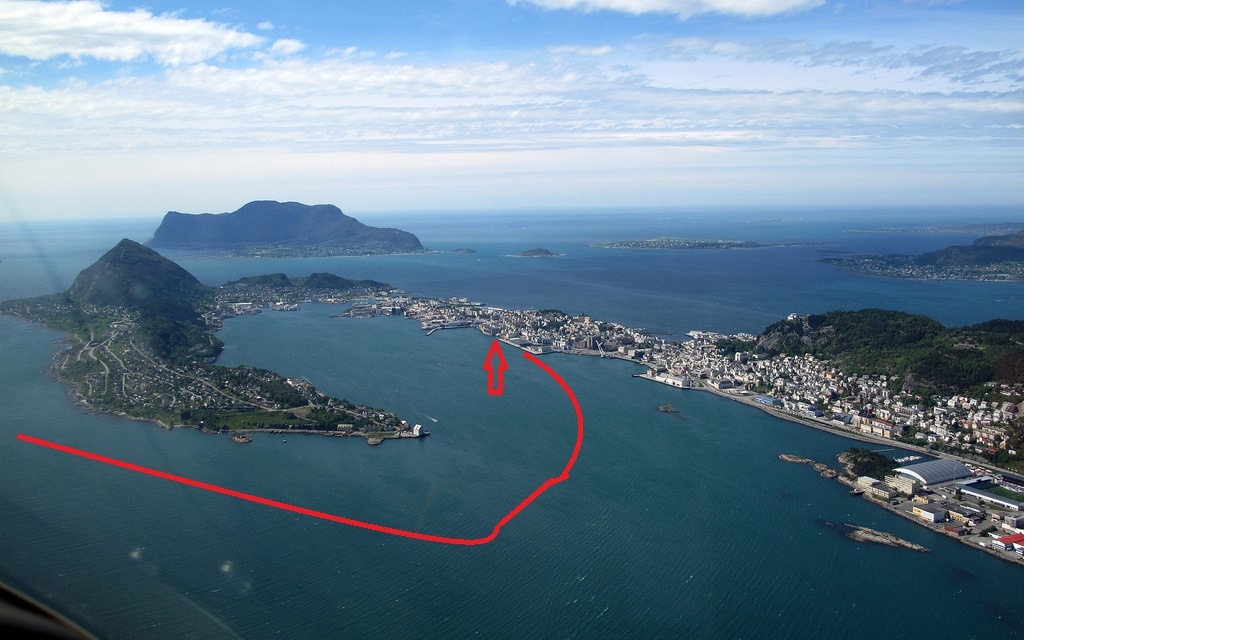 Beautiful Alesund and our approach to the dock. Two large ships can dock at this location and we had an “Apartment of the Seas” behind us today. Then at the other side of the town there is a another dock for one more big ship or several smaller ones.

For most of our journeys here in Norway we are under pilotage as most of the time we are in Norwegian Waters. When we sail deep into the Fjords we normally have two pilots on board so they can run shifts on the bridge. This does not mean that one is in bed and the other one on the bridge. Normally they are both there but relieve each other on a two hour cycle in order to stay fresh and focused. Most pilots come out of the Hurtigruten coastal mail system but some are from the Navy and a few come from deep sea. The Royal Norwegian Navy is mainly a coastal defense navy and thus they are in and out of the fjords all the time. 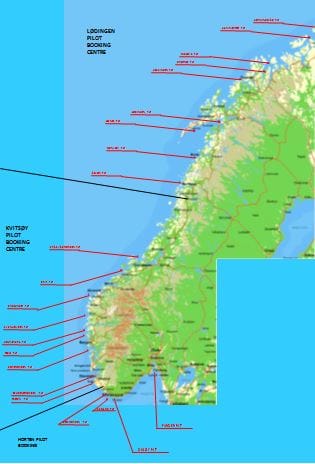 An overview of all the pilot stations of Norway. The black lines indicate where there is a Pilot dispatch center for the coordination of all services.

To serve the coast there are a large number of pilot stations dotted along the coast. Most of the time right in front of a fjord or sometimes north and south of a main city such as Bergen. To get our pilots scheduled we use our Agent in Norway and as this agency looks after most of the cruise companies it works out very well for the arrangements. The agent works closely with the pilot dispatcher to get pilots on board in the most economical way. Embarking two pilots and keep them on board for the whole coast does not really work as the coast is very long and the pilots are specialized in certain sections of the coast. As an example the Oslo pilot comes on and goes off at the beginning of the fjord and does not sail on with the ship to Kristiansand which is just around the corner.

When the pilot station and the sector is somewhat in between two locations then we can have the same pilots on board. Thus our friends from yesterday for Eidfjord stayed on to take us to Alesund as well. As we are staying a long time in Alesund, they went home after breakfast (very important for pilots) and tonight we will get two who will take us to the Geiranger anchorage. Most likely they will stay on for the return trip but they could be relieved in Geiranger as the access from the port the National road system is very good. The pilot system is based on the average usage of traffic and thus they are quite strapped for pilots on occasion during the summer time when all the cruise ships are coming in. And quite a few of those ships will be going deep into the fjords. Either to Eidfjord or to Geiranger or into the Sognefjord (the smaller ones which fit under the bridge) to look at the pulpit rock. Hence our agent has his hands full with getting the reservations confirmed on time and having the pilots lined up at the right time and in the right place.

This is Alesund pilot station with an indication of all the routes the pilots are looking after. This evening we will follow the brown route going down and then going East into Geiranger fjord.

My right place was in the tender today as it was Sailor re-exam for tender driving. The company requires a yearly evaluation of their skills to ensure that they run a safe tender system for our guests. Something they have to do again tomorrow in Geiranger as there is no dock there.

We should be all set in Geiranger by 08.00 hrs. We will be together with the Zenith which is on a shorter stop and therefore it is expected that she will be scheduled closer to the tender dock than us. We have six tenders so for the distance it does not really matter that much. I just hope that the rain will decide to drift into another fjord and we will have a dry day.