Today was our 2nd day in Reykjavik and we were joined by another cruise ship. The Black Watch from Fred Olsen Lines which is about half the size of the Rotterdam.  It is an older ship and it started its life in the early days of cruising as the Royal Viking Star. She was one of three ships built between 1971 and 1973 for the Royal Viking Line and offered in those days the top level of cruising. This was in the early days when new cruise companies were founded. Royal Viking eventually folded and via a few other owners she ended up with Fred Olsen in 1996. 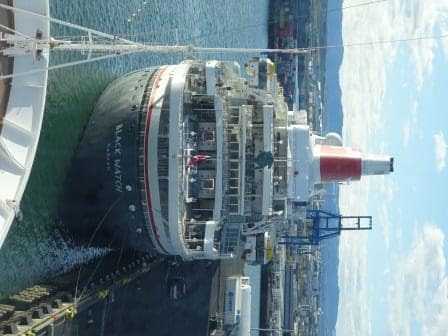 Our neighbour for today. In the centre above the Lido is a green bronze sculpture which is a trademark of Fred Olsen. These are “recycled” Bow figure heads of the old ferries of the the Fred Olsen Lines. Those not in use stand in the garden of the owner in Norway.

Fred Olsen is a 3 star company which mainly sails for the British market and specializes in the older clientele.  I was a little bit surprised to see her here as she was not on the cruise call list we had. Not that is unusual as often the schedules are based on the port bookings made two years in advance and later additions are not always added.  Holland America normally makes their reservations about 18 months in advance, as soon as the go ahead is given to print the brochures. Then a cruise is really set in stone and the cruise schedule has to be backing up the cruise planned. At least for as far as nothing changes in the period until the cruise starts. If we look what is going on in the world at the moment, we know that changes are constantly happening.

The weather turned out better than expected and the rain/showers are now being predicted for the tomorrow. It looks like the weather system expected has slowed down a little bit and that is good for us.

Part of my day today was spent  on training. I finished my ships inspection on behalf of the captain and the various departments are now following up whatever I found. Which was not much in perspective if you take into consideration how many lockers, compartments, nooks and cranny’s a ship has. So when I do such an inspection, then you look at everything you see, from the point of view: is it safe and is it in compliance with the company’s rules and regulations.   As I mentioned before, it is more about providing a fresh view from the outside than there is need, because the ship is having problems. Holland America Line operates on a very high level (even if I say so myself) and what we find during inspection is the really small stuff.  But then, if you catch a small item, it will not grow to it a big problem.

So my small problem catching phase is now over and we move on to the training bit. Every Cruise guest knows about the big drills. They are part of it themselves before we leave port.  Then during the cruise, sometime between 0900 hrs. and 12.00 hrs., there will be bells and whistles and announcements as the Captain and his team are creating / simulating mayhem somewhere. On occasion you might walk right into that mayhem if the emergency is simulated in the area where you happened to be. However those are the big drills where everything comes together. Underlying it is the small – on the job—trainings which prevent at least 90% of what could result in all those bells going off in reality.

We can this First Response Training. And every group on board who works in an –even marginally – challenging location will take part in these monthly trainings. Biggest focus groups are those who have to evacuate lounges such as dining room personnel or those who could create the danger themselves, such as the Galley Staff.  Thus every month we refresh the crew on location about what the routines are, what they have available to control an emergency (we talking fires normally) how to get backup from the Bridge and what to do if the issue is too big to handle by themselves.

Why are these refreshers needed? For several reasons; most of the crew is over 25 and thus we forget, so when we come back from vacation we have forgotten everything anyway (Ask any manager in any ship or in any hotel) and as we rotate from ship to ship where the layout might have been different and often the important buttons are in a different location than what a crewmember is used to. These trainings do not take long, 30 minutes on average and then everybody is back up to par again.

Tomorrow we are at sea and making the 860 mile crossing over part of the North Atlantic Ocean between Iceland and Norway.  It will take us two days to get to Scandinavia of which Norway forms the West side. We will also have two hours forward, which will put us tomorrow on British Time and then the day after on Norwegian or European time.