With a bright & sunny sky we approached the pilot station and the pilot hopped on board as scheduled at 07.00 hrs. Then it was only a short distance into the port and by 08.00 the gangway was in. We are using here a shore gangway as it is longer than our own and thus easier for when the tide goes up and down. The longer the gangway, the less steep the incline is when the ship goes up on the tide. The local authorities are prepared for this as the tide here can vary about 15 feet. Today it is not so extreme; the maximum difference is going to be about 9 feet. With the high tide being at 15.30 and the low tide happening about 6 hrs. later. In our case tonight at 10 pm.  That is a little bit more than 6 hours but then local tides always differ from the exact six hour rule due to the layout of the land and the inlets etc. 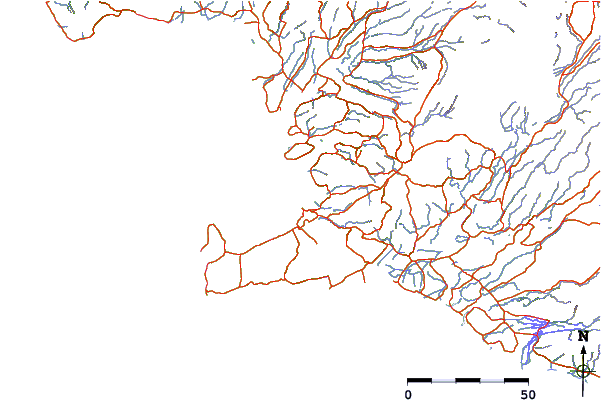 Looking at the coast around Reykjavik (just above the long finger sticking out) you need quite a few stations to get a good prediction. The blue stripes are little river and nearly every little river has such a station nearby.

To get this information as accurate as possible, most countries have tidal stations along the coast which measure constantly the exact local tide highs and lows and eventually this results in tidal predictions which are very near what happens on the day for which the prediction is given. It is never a 100% as a bit of wind, or a slight change in current can put the real result a few minutes off, or create half an inch in height difference. That is something we can live with. 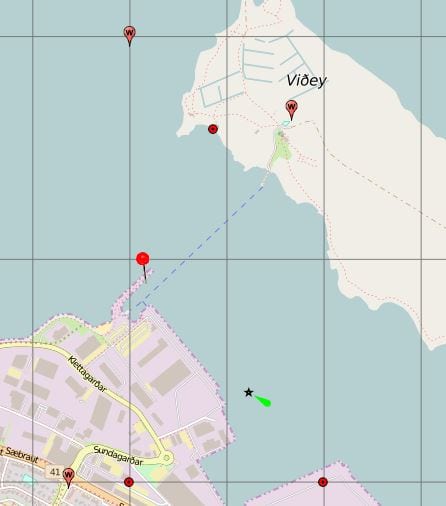 Commercial harbor. (Thank you Google Earth) The dotted line is the little ferry to Videy)

We are docking today at a dock which has the very Icelandic name of Skaribakki and the port area is called Sundahofn.  This is the outer harbor. If you are on a very small cruise ship you can dock in the old fishing port in downtown. But anything over 15,000 tons is already quickly moved to the commercial port. Makes sense as there is more room here for the buses, for supplies, for gate security and for the obiqious souvenir shop.  (Which is conveniently situated next to Security, so when you come back, you come back through the shop) But the hop on hop off bus stops outside the gate and thus we all should be able to live with it. 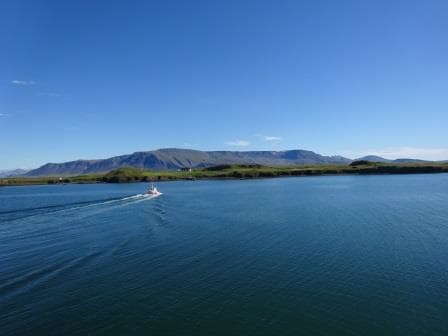 Little ferry to Videy. Maybe because of the nice weather but it was full all day.

As it is Saturday there is not much going on and thus the port is quiet. The only thing we see on a regular basis is the small ferry boat which goes to the island of Viioey (Also spelled Videy). This island forms the Northside of the natural harbor entrance for Reykjavik. From the ship the island looks just like a grass covered hill with a large house at the west side and a large house at the eastside. But there is more to it than the eye sees. Yoko Ono has a work of art there (Imagine Peace Tower) and the house you see on the photo is the Videy house and this was the first building in the country to have been constructed from stone. I wonder where they got those stones from as Iceland is mainly rock and there is not much clay or sandstone out there. 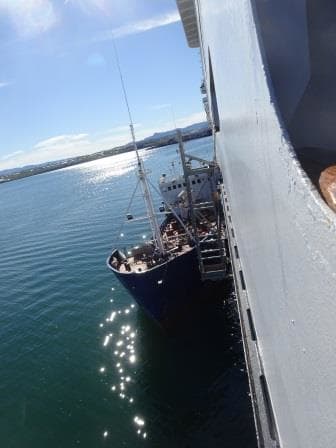 We bunkered 500 tons of MGO here and it came by a small coaster. With this weather not a bad job to do.

As we are here two days, the ship plans accordingly and tries to do most compulsory things on the first day so the 2nd day gives the crew more chance to go ashore. (Unless you are stuck with safety duty of course) Thus we had the bunkering going on and we had the lifeboat and liferaft drills. Today we also have crew change over, witch helps with a  2nd day as well, as it is all much easier if you have a day alongside to settle in.

I do not know what the crew will do in the evening, as transport is very expensive and drinks are even more expensive. But if they do, it will be strange to come out of the Pub or Dancing in the early morning hours and find it is still daylight. At least to a certain extent. We have the mid night summers day here, when the sun does not set and even now in late July (sunrise at 04.28 and sunset at 22.36) it does not really get dark.

So tomorrow we have a 2nd day in port and we will not leave until 17.00 hrs.  Yesterday I remarked that the 2nd day would bring rain but now it has improved to scattered showers with temperatures of 17oc / 57oF.  Thus it should still be a good day to go ashore but I hope everybody went to day as it was a gorgeous day.