Today we have a day at sea, to get to Iceland and doing so we cross two time zones. So last night we went an hour forward and tonight we will do it again. No doubt the Beverage Manager is not a happy camper as hours forward are not good for the Bar Revenue. (And we get two more between Iceland and Aalesund Norway) This area benefits from the confusion of what it is exactly to be called. The area along the East coast of Greenland is called the Irminger Sea and the area closer to Iceland is called the Denmark Strait. And then the whole larger area is called the North Atlantic Ocean.

The weather has also changed and today it was a dull day with the wind and swell increasing in the afternoon. Whatever the weather here is, it is different to the west side of Greenland. This is mainly caused by the Gulfstream. Although the Gulf Stream predominantly flows at lower latitude across to Europe, and then goes under England along the coast of the lowlands; a smaller branch turns northwards and brings warmer water to the area we are now sailing in. For the time of year this means normally less fog as wind and water do not vary much in temperature. It would need a very cold northerly wind to accomplish something. 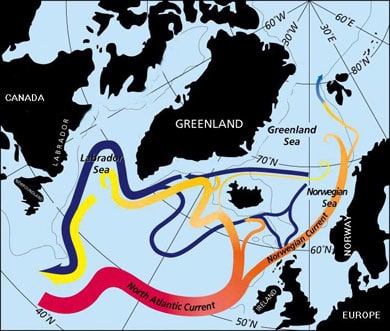 A minor branch of the Gulf Stream doubles back to under Iceland.

In the winter time the Gulf Stream does have a negative result, and it does that in conjunction with the Jet stream. The Gulf Stream generates about every three days a new storm off Cape Hatteras. It comes up right under the coast there from Florida and then goes across. While the Jet Stream propels these depressions across, their force is being nurtured by the warmth of the Gulf Stream.  Now whether Europe gets a storm or not, depends on where the Gulf Stream is going. If there is a High Pressure ridge over the Azores, the Jetstream tends to bend to the North towards Iceland and then they get the storm.  If this is not the case, then the storm goes straight across and makes a landfall either at Ireland or at the south west area of England.

Most winter storms go the Iceland way. Maybe another reason they do not have much in the ways of trees there. During the winter it blows here quite often (about every three days). If a storm makes it to densely populated Europe then there are fun and games. Especially if the storm arrives in combination with a Spring Tide. Then the water is already high to start with and then an extra push by a strong storm: and along the coastlines of England, Scotland and the Netherlands the alarm bells go off.  In Holland we had a very bad one in 1953 when the (weak) dykes broke through. As a result the Dutch really went to war and now the enormous Dykes and Water Barriers protect the areas where there are no dunes. A lot of tourists now come to see what has been done there and the “Delta Werken” are a standard part of a tourist tour through Holland.

But even in my little English Home town, tucked away in the east corner of England, we had fun and games fairly recently . In 2013 there was a spring tide, the wind was at the right (or wrong angle) and the sea barriers and Beach huts took a severe battering.  And that was away from the full force of this Spring Tide storm. I cannot post any photos of  this as otherwise I run into copyright issues with the English newspapers.

We did not have any bad weather today and the excitement on the bridge was limited to a ship we passed at 10 am. on our portside and which we could not identify. All ships over 300 tons are required to have an AIS on and then it takes one click on the Radar and we know who it is. They did not, naughty boys, and thus the guessing started. First idea was a fish processing plant as the ship was white and sitting just outside the 200 mile zone off the Greenland Coast and thus local fishing rules would not apply. We did not see a net but there was something hanging from the stern. The funnel colors were, yellow, blue grey and those colors I have seen on both USA and Russian companies. So we thought maybe it was a scientific vessel. 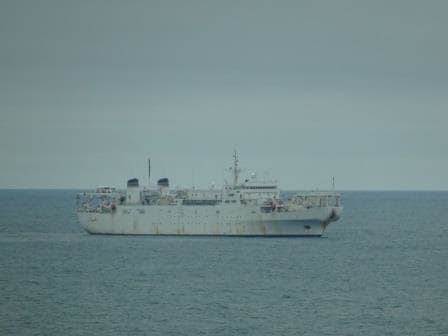 The Zeus cable layer for the US navy. I wonder if the US Navy is branching out in the TeleCom business.

My guess was the US Sealift Command as that would explain the no AIS signal as military vessels are not required to use an AIS. So I turned to my friend Google and he knew the answer. It was the USNS Zeus (T-ARC-7) a cable laying vessel of the US navy.  As you can see never a dull moment at sea.

Tomorrow morning we should be at the pilot station at 07.00 hrs. and docked about an hour later. We are staying two days as there is too much to see and enjoy in Iceland to cover in one day.

Weather for tomorrow, Sunny with temperatures of 67oF/ 17oC and a bit of a breezy day. For Sunday rain is expected so hopefully nobody will leave it to the 2nd day to go ashore.