After we left Reykjavik last evening, we sailed around the south side of Iceland. Which is the shortest route to go east while rounding the Island. For our Casino players it caused a bit of inconvenience as the Casino remained closed until close to 10 pm. Reason, the ms Rotterdam remained within the 12 miles zone for about 5 hours.  And nothing the Captain could really do about unless he made a very big detour and then the cost of fuel would never make up for any winnings there might have been. (And as it is a Casino you are never certain that the House would have won that evening)

Thus while the Casino addicts where having withdrawal symptoms the ship curved around the south side of Iceland until it finally got outside the 12 mile zone. Why the 12 miles zone? Most European countries maintain a no gambling rule inside the 12 mile zone. Regardless of whether the ship will call at a port in that country or not. For North and Middle American ports it is normally 3 miles and sometimes you can already open once the ship has let go all the mooring lines.  I have even been in the situation that we were allowed to have the Casino open in port as long as nobody from the outside could get on the ship. So the purser has to carefully check for each destination what the rules are to ensure the ship does not break a rule as the penalties can be severe. 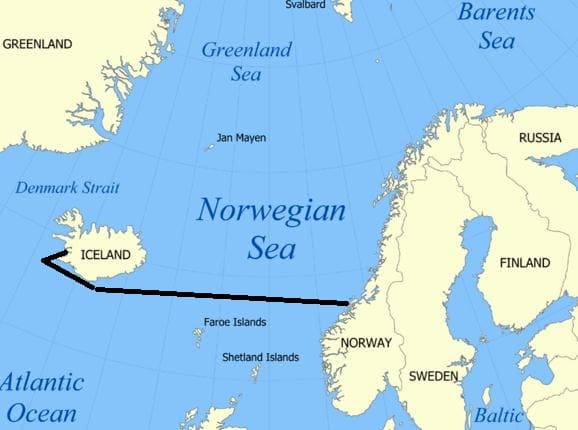 Our route  to Alesund. To make things complicated mankind has decided that the stretch of water between the North Atlantic Ocean and the Arctic Ocean is called the Irminger Sea, the Denmark Strait, The Norwegian Sea, The Greenland Sea and the Barents Sea. And it is all the same salt water.

When we plan a cruise we try the stay outside the 12 mile zone as much as possible. And quite often we can do so, if we just tinker a little bit with making the shortest course line just a tiny little bit longer, but it does not always work that way. And thus the decision is sometimes, the Casino has to stay closed for a few hours until the ship comes outside the magical 12 mile zone.

The shops on board have often less stringent rules. Most of the time they cannot be opened in port with the exemption – sometimes – of the shop which acts as a Drug Store and which does not sell any duty free goods. Then there are situations where a local tax has to be levied onto any sale a shop on board makes if it is within a certain zone. Florida has such a ruling. Within the 3 mile zone from the land, local tax has to be added to any transaction. Whether it is shop purchases or drinks from the Bar. For the shops the situation is we simply keep them closed until we are out of the 3 mile limit. That is most of the time already very shortly after departure and by opening the shops at 18.00 hrs. with a 17.00 hrs. departure we solve all the complications.

Today we do not have that problem. Once we cleared the 12 mile zone we were in normal international waters again and we will remain so until we come to the Aalesund pilot station. During the night we will pass north of Faroe but we will stay well clear of those islands. No extra income for them. 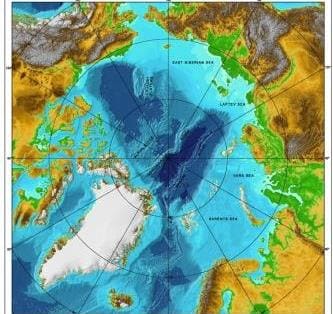 A Map view looking down upon the North pole with Iceland to the South. The darker the blue color, the deeper the water.

The area we are crossing is part of the North Atlantic Ocean but is called here the Norwegian Sea.  To the North it is bordered by the Arctic Ocean and then to the south by the North Atlantic Ocean proper.   A chance of running aground we do not have here either as the water depth is well over 5000 ft. One of the reasons we do not see any oil rigs here,but something we will extensively see when coming down from Aalesund.   This area has always been water and was never dry land and thus no tropical forest which then through time turned into Fossilized Fuel. From Iceland the depth takes quite a plunge and only rises steeply up when coming close to the Norwegian continental shelf.

Today the weather was typical for this area. Due to the influence of the warmer water from the South which mixes with the colder water from the north, you can get quite unstable weather here resulting in summer storms. There was one here a few days ago and thus we have a slightly moving ship reminding us we are not on a coach trip. Mostly overcast skies although in the late afternoon it started to clear. Temperatures did not come much higher than 9oC/ or 45oF due to the cold wind from the North. Not good weather to sit outside for very long. But for that purpose Trivia Pursuit and Bingo was invented on the ships.

Tomorrow is our 2nd day at sea and to get in synch with the Central European Time we will go one more hour forward tonight and then it is done with moving the clock for the remainder of the cruise.