So bright and early we arrived in Juneau. Although bright might not be the right word as it was decidedly overcast with a lot of dripping. I really want to use the word rain but it really does not cover it. Yes it rains but it is not a constant down poor but it is also not a constant drizzle, it is something in between. Maybe I should stay with drizzle and drip. Not that it mattered, whatever it was the guests streamed ashore and it did not seem to bother anybody. 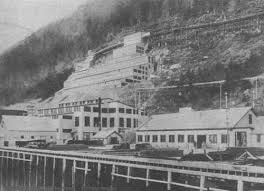 The way it was a long time ago when the mine stretched down all the way to the water.

Most of our guests went ashore but some who had been here already several times opted to stay on board.  What was interesting is that I came across a couple who had spent their honeymoon here some 40 years ago and had come up with the Alaska State Ferry when it still docked at what is now the cruise terminal. They had taken lots of photos and were now trying to match the waterfront from those days to what they saw now.  Together with my memory from the early 80’s we were able to place quite a few of the photos in there right context but it was not easy as so much had changed after the cruise boom took place. 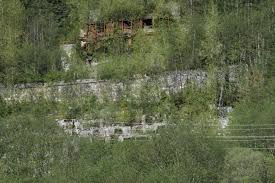 Basically the mountain Mount Roberts was still the same, but one major landmark the gold mine had disappeared. The mine and later the defunct remnants of its entrance had long loomed over Juneau. Then a few years ago the mine was briefly reopened. Very briefly but just long enough to have all the visible ruins removed. Now when you sail in with the ship you cannot see anything of the mine any more from the water side. 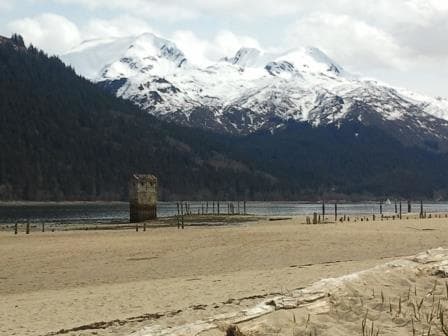 Except when you look to the other side; the Douglas side. There at the edge of the beach and the waters of Gastineau Channel stills stands a single ventilation house, which looks a bit like an oversized outhouse. It has been standing there since the mine was in operation providing ventilation to the mine shafts running under Gastineau Channel. The peculiar thing is it does not seem to deteriorate that fast. At least I cannot see it and I get a snapshot every year. It must do so though as I do not think it is being looked after by any preservation society. Gold is still being mined in the Juneau area but at the other side of the mountain. And of course the gold mining and panning is now a tourist attraction.

We docked today at the Cruise Terminal as the Volendam who came in at noon time, was assigned to the Alaska Steam dock, which is the dock all the way in the corner, with the nose into down town.  The cruise terminal is not a bad place either as it is still connected directly with the town, and all the shops, without having to walk a long way first. It is closer to Mount Roberts Cable Car and it has a visitor’s center right in front of the ship, which I had not seen before. Another new building but at the Franklin dock is the new office from the CBP. With so much business and most of it coming from the cruise ships, they moved closer to the port. As a matter of fact so close that their office is on the dock.

I had to deal with the CBP today as I was sending off some boxes to a friend of mine. I had just discovered that the US post office has this amazing deal for shipping a medium size box for the same price regardless of the weight. So you can ship 12 full size stone bricks for 12 dollars all over the States. I was not shipping bricks but something close to it………. old cruise brochures and menus. Those things weigh nearly the same. I wish they would have a similar offer for mail to Europe…………..  But before you can take anything ashore it has to be inspected and approved by the CBP.  Thus I presented myself with open boxes and my Customs form at the appropriate time. We have currently a very friendly CBP Lady but she is also very thorough and after I solemnly declared (and had verified) that I was not importing, food, seeds, wood and a whole list of other things that might threaten the USA, I could close my boxes and carry them ashore.  The US mail has a substation right in down town which is heavily frequented by crew members (maybe they opened it there for that reason) and stops us from having to make the 20 minute hike to the Federal Building at the outskirts where the main post office is located.

Tomorrow we are not going to Icy Strait Point, but to Glacier Bay. Holland America managed to get an extra Permit for the Statendam and that is a chance we do not let go. So on this cruise the guests get the chance to see Tracy Arm, Glacier Bay and Hubbard Glacier. Three glacial highlights in one cruise …………… …………….Only with Holland America.