Coming to Costa Rica, you have two options for docking. Going to Puerto Caldera or to Puntarenas which is about 2 miles to the west of P.C.  Until about 10 years ago Puerto Caldera was the only port. Built as a cargo port, it started to attract more and more passenger ships.  That we docked there did not matter for those on tour, as you could hop straight away on the Highway to San Jose, the country’s capital. But if you stayed on board, then it became a problem, as apart from an impromptu flea market, there was and is nothing there. You would have to take the taxi to Puntarenas the nearest town.

Thus the authorities decided to build a very long pier, reaching into deep water; they dredged around a bit and created a cruise terminal right in the middle of the town. A very nice and wide pier with a little shuttle train taking people to and from the gate, if you did not want to walk.

However this pier has two issues. While the dock of Puerto Caldera is protected by a breakwater against the incoming swell, the pier at Puntarenas is completely open. If there is a high ocean swell, then the ship will move on that swell alongside the dock. Sometimes the swell is so high the ship cannot give out a gangway, or accept a shore gangway.  Secondly  because of its location, it has a heavy current in the area and that makes it quite difficult for ships to dock and undock. Hence you have to adjust your arrival and departure times to nearly the slack tide times when the current is near zero. 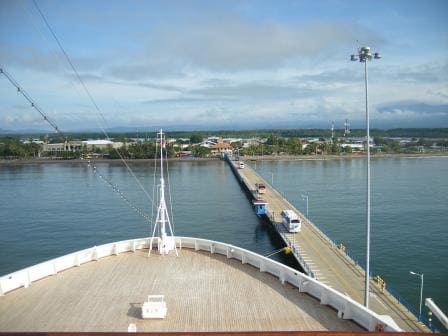 Thus both ports have its advantages and disadvantages. The authorities now have a nice pier and want the cruise ships to use it. The captains want to have a steady ship alongside and arrive and depart on the regular schedule and thus they want Puerto Caldera as a Plan B and sometimes as a plan A.  I had to make that decision a few times in the past and I always preferred Puerto Caldera. No so handy for the guests maybe, but at least we could always dock, and we could dock and undock at our regular times, without having to take the current in consideration. 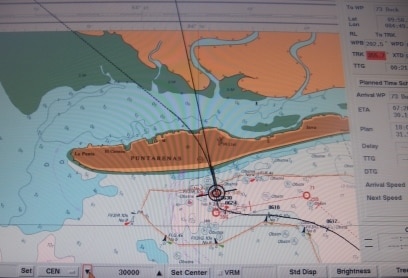 A view from the electronic chart. Puntarenas is located on a peninsula to the west of Puerto Caldera. This location causes a strong East/West current

Luckily today there was no issue. Slack tide was around 06.00 and the next slack tide was around 18.00, both more or less in synch with the cruise brochure. Also the swell was only a foot or so. It made the gangway move but not to a dangerous extent. The only challenge was the heat. It was very warm today. So I did not mind to spend most of my day inside.

Today I facilitated a big drill, called a triage drill. This is a sort of emergency drill but with so many casualties that it is beyond the capabilities of our medical department. Still we have to cope and thus we have Triage scenarios.   Triage means assessing and then deciding on priorities. Who can we save, who can wait for treatment for later and which victims are hopeless cases. It was developed by the army to deal with large number of wounded soldiers but it is applicable in the same way to cruise ships with larger number of people in close quarters.

The focus on the drill is to have everybody support the triage officer (most often the lead nurse) during the initial triage assessment and then very quickly get the injured people to the various treatment area’s where the rest of the medical staff (2 doctors and one more nurse) can work in safer and better circumstances than at the scene of the emergency.

So 16 victims (volunteers from our entertainment and deck department) were in the show lounge where we simulated a collision. All had a  sticker on their breast with their problem (broken leg, unconscious, burns, leg missing etc. ) for quick assessment and then they were all taken out, one by one, on stretchers and in wheel chairs and transported to the various treatment areas. The coordination of it all is the biggest headache as it involves so many people in difficult circumstances.

It all went very well. Yesterday we had a pre briefing and all involved (about a 100 crew) had taken all the past experience to heart and used it during today’s drill as best as they could. Tomorrow we have a debriefing for lessons learned which we will then apply again next time, while I will try to make it company policy.

Tomorrow we are in Corinto. We are scheduled to arrive at 10 am during what looks like another sweltering day.