Today a peaceful and nearly wind still day at sea. The only movements that can be seen are other ships coming from or going to the Canal and Brown Boobies and Starlings hovering over the bow. The moving ship produces an upstream of air and the birds love it. Without any real wind there is no turbulence, so they can drift on the “bow wind” and land on the railing whenever they want. 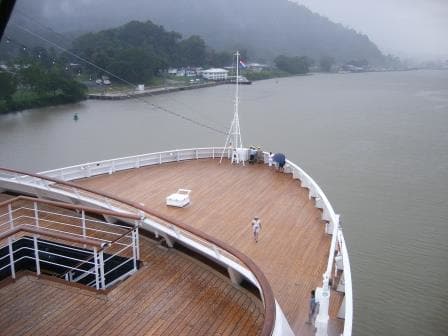 On the very top of the bow mast is a small black box. Inside is the Panama Canal steering light……and  it offers a perfect landing pad for any self discerning sea bird

As they like to sit high there is a constant tussle going on between them of who is allowed to sit on the highest point – the top of the Panama Canal steering light.  Nice to look at and some divertissement for the Navigators. The only person who will be distinctively unhappy will be the Bo’ sun as the birds tend to leave presents behind on the wooden deck, before they move on.

Yesterday we were in the Panama Canal and between a cruise ship and a cargo ship there is one big difference to observe; tugboats are seldom used.  As they are compulsory when entering and leaving the dock and anywhere else where the pilots deem it necessary, you see them hovering around the ship but a cruise ship they seldom touch.  All courtesy of the gadgets that make the cruise ships so maneuverable.

But even among the cruise ships there are differences. Sometimes in design and sometimes in power. The more modern the cruise ship the more powerful the propulsion tends to be and the same goes for the thrusters. I think that the designers realize that in the long run cancelling ports is less cost effective than spending a few dollars on equipment during the new build.  Thus all the cruise ships now have bow thrusters, stern thrusters, pitch propellers, double rudders or the combination of propeller & rudder & thruster into a pod.

Basically with having all that power it means that you carry your own tugboats with you, which will enable you to dock in ports where there are no tugs, or where the tugs are not strong enough. More power and you can dock during higher wind & current situations.  For the latest generation of cruise ships it is not unusual that they can maneuver against 40+ knots of wind and that is Gale force winds. Winds that almost make you bend over while walking in it. If the captain deems it safe to dock, it again reduces the chance of a cancellation. 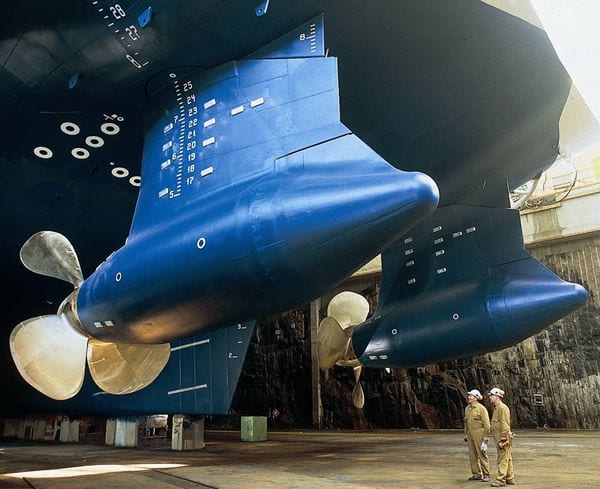 This is the pod setting for going forward. The ship is pulled forward instead of being pushed forward as is the case with a conventional propeller system

Since 2000 the addition to the ships of podded propulsion has become more and more standard. The great advantage is that it combines the stern thruster, the rudder and the propeller into one unit. Basically it acts as if you have an outboard motor hanging under the ship and the way you pull the handle is the way the ship goes.   For maneuvering a ship it does not make that much of a difference, whether everything is separate or combined into one unit, except for one issue: With rudders and stern thrusters you are limited to a certain amount of power that is available. With an Azi –pod or Mermaid – pod (Azi pod is name of the ABB Company, Mermaid is Rolls Royce) all the power that you use for going forward is now also available for going sideways.

Starting with the Amsterdam in 2000 all our ships, built since then, have podded propulsion.  Also our new ship will have it and as everybody is very happy with this concept, I will think we will keep it for a long time to come………….Until something new comes along.  The Pod was a bold innovation but no doubt there will be –out of the box – thinking going already again. It will be exciting to see what the next innovation will be.  I would not be amazed if some sort of sail assist would be the next step.

Most of the day we were still sailing off the Panamanian Coast but by 5 pm. we crossed the border between Panama and Costa Rica. Then by tomorrow morning 0500 hrs. we will approach the Golfo de Nicoya to dock at 0600 in Puntarenas.  Weather expected more of the same; warm, sunny and the occasional downpour.