The frontal system that made it such a wobbly day in Cabo San Lucas was still sustaining a wind from the North West and that gave us a little push in the back. Much appreciated as on this stretch of our cruise we have the current against us, lopping nearly a knot of our regular cruising speed. It also caused for a nearly wind still situation on the deck, as the Statendam was sailing along with nearly the same speed as the wind velocity causing a relative wind of nearly zero. Always a pleasant way to start the cruise. On top of that the dolphins were out in great numbers so for those guests who were not engrossed in the daily activities on board, there was something to look at outside as well. Apart from dolphins and birds there is not that much wildlife yet. Most of the whales are only now starting their migration south and we only see occasionally a spout here or there. By the middle of December most of the resident whales should have returned to the Cabo Area and then we most likely have a whale in sight all the time. 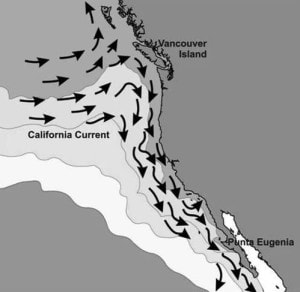 The general flow of the California Current.

The currents here along the coast are a real headache for our scheduling. We try to run our engines in the most economic way and that means, changing settings as little as possible with just being marginally in the plus if possible. In general we are under the influence of the California current, which comes down from the Vancouver Island area all the way along the west coast of the USA and then curves back into the Pacific at the end of the California Peninsula. Very generally speaking, if you are sailing with the ship here you find out that is not exactly the case. Due to the layout of the coast with its bays and islands, there are counter currents which form their own micro circulation system. That results in the unpleasant fact that when you think that you have the current with you, and are about to say thank you to Mother Nature for a free knot of speed then suddenly that knot goes against you. 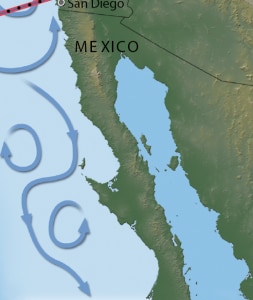 The local counter flows, off the Californian Peninsula.

A few hours later and the whole thing has reversed itself again and you are back to what is the normal expectation. Half a day later and the same occurs again. So half way through the evening we had to bring another engine on line just to counter this phenomenon and to maintain our average speed to make it on time to Puerto Vallarta, our first port of call. The Celebrity Infinity, who was still cooped up in port when we left San Diego, came racing by as they have their first stop in Cabo San Lucas tomorrow before catching up with us again later in Puerto Vallarta where they will arrive around noon time, while we will be there at 0700 in the morning. As they are under the same current influence as us it must mean that they have all their power on line to sustain the schedule.

What makes sailing along this coast a bit boring is the lack of scenery. Due to the combination of the land warming and the cooler sea out here courtesy of this California Current, the land is always seen through a sort of haze. Totally different compared to Alaska where the cold air creates scenery as clear as a picture postcard. That is unfortunately not the case here and only when we come very close to the coast as well will tomorrow, when we do a sail by at Cabo San Lucas, we will have a good view of the shore line. So today we trundled along happily with an average speed of 17 knots and that will bring us near Cabo San Lucas around 2 pm tomorrow and to Puerto Vallarta the day after tomorrow at 0700 hrs. The ship is sailing with a full house as usual and this time we have over a 1000 Mariners on board which makes the cruise look more like a reunion than a regular run of the mill 14 day trip.