Today we had our 2nd day at sea and that meant that we saw the outside temperatures slowly climbing. As can be seen on the chartlets posted yesterday, the California Current is moving away here from the coast and replaced with warmer water flowing along the Mexican coast. That has an immediate effect on the temperatures. From noon yesterday to noon today the outside temperature jumped by 10 degrees from 72o Fahrenheit to up to 84oF. It will continue to rise to about 88o F. when we are docked in Puerto Vallarta tomorrow. In combination with little wind on deck, it made today for a very nice and warm day. I am not expecting much change in the coming days, so those who think that it is too hot, are better off taking a cruise around New England, as I believe the first snow has just fallen in North Hampshire.

Today was our sightseeing day with doing a sail by past Cabo San Lucas. It being a Sunday meant that every Sunday Sailor and Six Pack Navigator present in the marina of Cabo was out and about in the open waters around the Cape. (Not accusing the professionals among them of course) Most of them sit/drift near the shallow banks North West of Cabo Falso (the South West point of the Californian Peninsula) where the cold water from the deep ocean wells up to the surface and brings with it rich nutrients. As a result there is an abundance of fish there and great for fishing. We sail between these shallow areas and the coastline, where the water depth drops back to several hundred meters again. However, there are always a number of boats out there, “doing things”. The problem is that we do not exactly know what they are doing. I train my navigators to be alert and follow the rules but at the same time to try to think as a Sunday sailor. For us we think that a safe passing distance in open sea is about a mile, for them 60 feet is already a lot. So by trying to think their way, we can avoid a lot of course changes and unnecessary movements. Based on that principle, the navigator on watch simply steered clear of clusters of boats and then indeed observed that the single boats nicely kept clear of us. 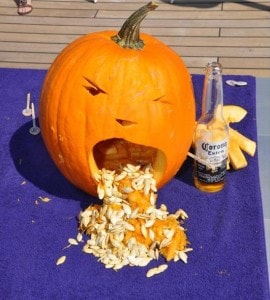 Pumpkin artistry on the Statendam

For those guests who were not that interested in looking at the scenery of Cabo San Lucas, the daily program offered a lot of diversion for them. One of the highlights of today was pumpkin carving, as we are gearing up towards Halloween. By us Northern Europeans is always looked upon with a bit of bemusement as it is a very American celebration. Although it has to be said that commercial forces in Europe are trying to gear up interest for this as well. And indeed with some success. The most peculiar thing is of course that it originated in Europe as “All Saints Day” but with the protestant reformation it was reduced in importance and quite often no longer accepted. It was the same in the States during the days of the Pilgrim Fathers but then slowly it gained importance again. I have been told that it is after Christmas the most commercially important holiday in the States generating some $6.9 billion of revenue each year. Whatever the commercial angle might be, pumpkin carving was taken part in with 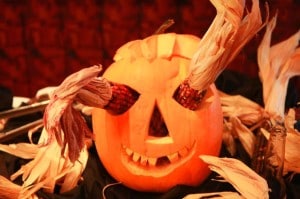 great zest and a fierce competition ensued among the lady guests with the aim to win the first prize. The results were quite impressive in some cases, indicating many years of practice in the tradition.

Tomorrow it will be Halloween and of course our daily program will be geared towards this topic big time. My American crew has already asked permission to change the Officer Bar into a Monster Grotto or something and who am I to refuse. It will be interesting to see what costumes they come up with. Last year the theme was Zombies and there were quite a few very skimpily and very attractive zombies out there, so much that I thought that the job of funeral Undertaker might not be such a bad one after all.

Tomorrow we will be in Puerto Vallarta and we have been assigned dock 2. Pier 1 is the main dock, opposite the flea and tourist market but dock 2 is opposite Wal-Mart, the Galleria and Home Depot and that will no doubt please a lot of guests as well. It will certainly please the crew.