During the past weekend, most of North America went to winter time and so did parts of Mexico. That included the province in which Puerto Vallarta is located. As a result we arrived this time in daylight at the pilot station instead of in the dark as was the case during our previous call four weeks ago. In a way that is a bit peculiar because you expect when you coming closer to winter that the sun will rise later and not earlier. The hour back changed that of course and as a result the sun rose earlier, according to ships time, than the call before. The pilot boat was waiting for us at the sea buoy and without further ado we sailed into port. Although drifting in, is a better word. The distance from the pilot station to the dock is less than a mile and that means while you are just entering the fairway into the basin you have to start taking the speed out already. Especially with dock nbr2. which is in the corner of the port. If you overshoot here, you end up against the concrete wall on the north side and that is a thing you want to avoid at all times.

Puerto Vallarta has been developed like fury in the last 30 years. When I came here for the first time in 1982, there was nothing apart from the original downtown area. Then they built two semi high rises near the port entrance and that made us mariners very happy because at least now we could find the port entrance . In the days before good radars, GPS and no lights on the shore line, that was not so simple. Then dock nbr 1 was completed and ships could come alongside. Provided it was a cruise ship with thrusters as there were no tugboats and the basin was still very small and shallow. For the ultra modern ships (at least back then) of Holland America, the Nieuw Amsterdam & Noordam of 1983 and 1984 this was not a problem and we happily docked here during the winter seasons of 1984 to 1986. Next to us was sometimes the Star Dancer and then one of us would be docked “style mediteranee” with two anchors down and the stern tied up to some bollards located in the jungle. 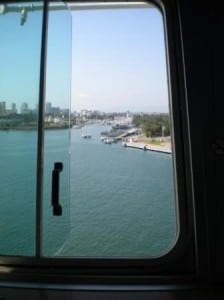 The Marina which was 30 years ago, very small with swamps on both sides of the river banks.

Then came the cruise expansion and with it the development of Puerto Vallarta and its port. The Marina was developed from a swampy river and three quarters of the ports where “docked in” (I wonder if that is proper English?) by creating cruise ship piers all around the port.  That gave us the option to dock today at Pier 2.  Pier 1 was reserved for the Celebrity Infinity which is a much longer ship and would block most of the port if she was at Pier 2.  If one ship can more or less block the port, then you will understand that the harbor is not that big. Hence the reason for slowing down in the approach fairway already. As soon as you get into the basin, you can go slowly forward and sideways until you have nestled your ship tightly in the corner, and there we stayed for the remainder of the day with a good view on the local commerce. Right in front of the ship is a double highway and it seemed that on arrival that everybody from outside wanted to get in and everybody inside wanted to get out. More than 10 Coca Cola trucks came by within 10 minutes and while I was counting the Pilot confirmed that there was a bottling and distribution plant just north of the Town. Right across from us was a grocery store called Sam, quite well-known in the States and that created a good bit of excitement among guests and crew alike.

It was a wind still day and the port is sheltered from swell from all directions except the SW. (rolls in through the fairway if the wind is from that direction) and thus a great port for lifeboat drills.  You can happily lower all your boats and sail around the basin, without having to worry about swell or traffic. 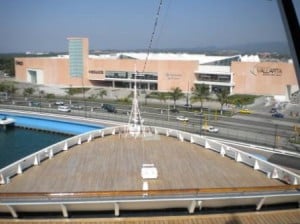 I could not dock closer to a shopping mall even if I wanted to.

The basin is just big enough for the Statendam to swing around in, but I opted to back out of the port instead of swinging around.  While in the basin, we have no more than 6 to 8 feet under the keel and that makes the swing a long and drawn out process, as it takes so much time for the displaced water to flow under or around the ship. So in principle it is much faster to go straight astern with 2 to 3 knots and swing outside where there is much more depth.

So we did and by 17.30 hrs. we were will on our way to our next port of call Huatalco de Santa Cruz. That is 690 miles away and calls for another day at sea. A wind still day and warm day. This is cruising in accordance with the photos in the cruise brochures.