The weather gods are really favoring us here in Marghera. Today we had another dry day with a little bit of sunshine which took the chill away but at the same time did not make it too warm. Perfect weather to finish a big cruise ship. And thus we did, at least we work towards it. The crews working in the public rooms have now started with training the proper serving in the restaurants and using themselves as the guests. So we could observe the rather strange situation of half the Pinnacle Ladies and Gents having High Tea while being served by the other half of the Team. Similar things were going on in other locations including the Bars. (Although here the bottles were not opened) Orders are now ship wide being taking by means of a tablet which forwards each order directly to the point of issue. It reduces the walking a lot and it should also speed up the service. 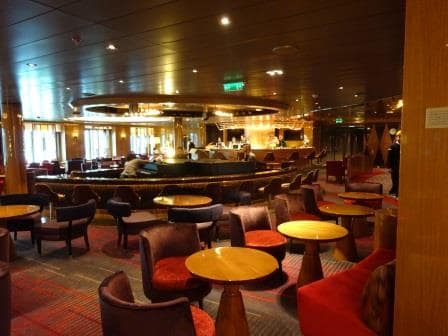 The piano players are sitting opposite between two grand pianos. In the far background the testing of the beer pumps is in progress.

On another level, but with the same objective, are the rehearsals of all the Entertainers who will work the Music Walk. Today the dueling pianos in the Billboard were in action and in five minutes time I learned that it is not so easy to have two pianists sing together and make a show out of it. Billy Joel sounded good to me but the Musical Director / Trainer was reviewing line by line the tune and so it took a long time before the song came to an end.  With all the yard people still milling around they were not short of an audience. In the same way the Bar Personnel could follow it as well. They were getting training from a specialist Dutch Trainer in how to draw a correct “kleine pils ” and a “grote pils”. If you decide to serve Dutch draft beer then it has to be right. Two fingers of foam and not more; also not less. 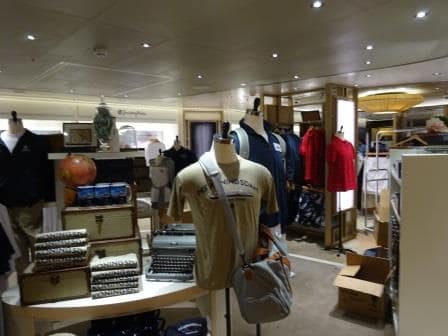 Shops on Board. almost ready for opening.

The shops are also under full steam and the displays are being filled and display cases arranged. This is only partly done by our own shop staff. For the initial, perfect setup, expert widow display people have flown in who take care of arranging everything in such a way that everybody should be enticed to enter the shop instead of walking by. These people do not only do new ships, they also sail with the ships when they are changing cruise area. E.g. when we go from Alaska to the Caribbean and vice versa. 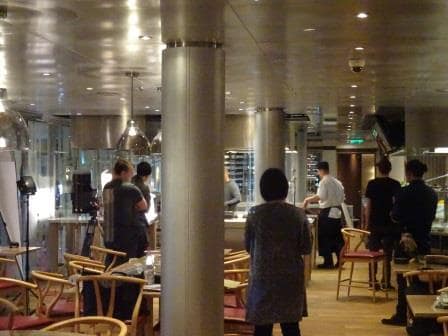 The Chef preparing a dish for the camera only.

Public Relations has also descended upon the ship; to document and announce what is happening with the ship as soon as it will be ours. Part of the activities form the filming of what happens in the various food outlets. Today they were busy in the Culinary Arts Center and documenting in close up how the CAC chef is making a dish. This is a long and drawn out process as what the chef does IS professional but if the shot is not correctly taken, then it does NOT necessary look professional on the T.V. and thus it is a long and drawn out process. A sort of cooking in slow motion so to speak. 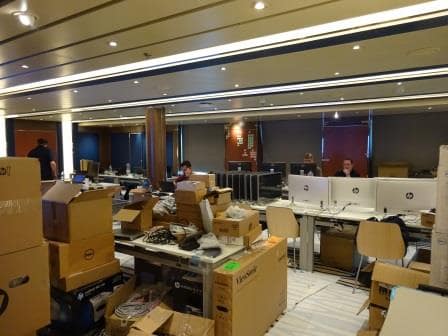 All the equipment is there. All the Electrics in place. Now the all important moment of making the right connection.

Controlled chaos is still reigning in the Microsoft /Digital Workshop where the technicians have to make all the computers talk to the main one of the Instructor and also ensure that all of them have a good link with the internet. As computers mean basically unpacking boxes and plugging in the cables, the clutter created does not mean that much. The preparation until the monitors can be plugged in is what is taking the longest. 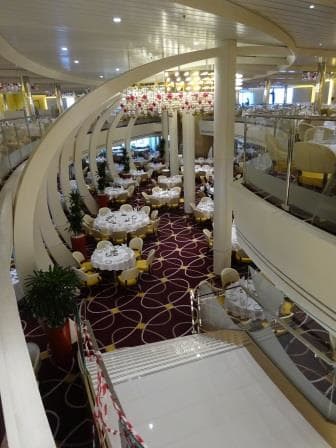 Here we are with the Dining Room Complete, ready and with all the tables set.

Today the dining room was setup completely and now the stewards are getting familiar with how to use the steward stations in the most economical way; how to walk the quickest from their station to the kitchen (especially if guests  have pushed the chairs back a bit more) and they are getting familiar with the menu’s. Apart from knowing the menu’s by heart they also have to know what is in each dish and whether it might provoke an allergy etc. Thus in short bursts of training the dining room managers go through all the entries and step by step everybody will come onto the same page. 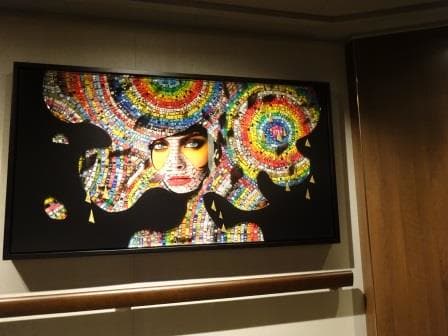 In real life the eyes are looking at you in a different way than seen in the photo. Very strange.

I am ending again with a piece of art. A little bit of an unsettling one for me this time. To my amazement the eyes in the picture came out differently on the photo taken with the camera than when looking at directly. Very strange and I have to have another look at it in the coming days.  There must be something in the frame of the cover glass which is causing it.