This town is located on the north side of Iceland at the end of a 28 mile deep fjord. The latter can be a blessing or a curse. Fjords can the shelter the docks from the wind or they can enhance the wind or funnel wind, if the wind direction is in line with the fjord. We arrived in foggy weather and also found that the entrance was shrouded in this hazy stuff. I had planned for this situation to occur, so we had built up a bit of spare time in the schedule and that meant that we did not have to race into the fjord. At sea you can always make a round turn or another major course change, in a fjord that is a little bit difficult. Reducing speed is the only option and that means it helps if you are already going slow. By the time we were halfway into the fjord the shore lines came in sight, which meant we had visibility of about a mile. Three quarters down in the fjord, the fog lifted and we could see the hamlets lining the shore. This is the place where a lot of Reykjavikians come for their summer holiday and we saw several clusters of cottages dotting the hill sides. Today it did not look much like a vacation destination but normally the weather is quite pleasant here.

In the mean time I had to deal with this funnel wind. Although it was not blowing straight through the fjord, the wind force 4/5 outside was still enough to create a wind force 6/7 near the dock area. That is a little bit too much for the Prinsendam to cope with and my hope lay in the fact that the buildings near the dock would give me enough shelter while docking. However there is always our funnel; a funnel that towers above everything and acts as a veritable sail. Luckily the lay out of the port gives room for alternative plans. Two docks; one 90o on the wind and the official cruise terminal, one in line with the wind but it is the container terminal and a deep water basin for dropping the anchor if the docks are not available.

We were supposed to dock at the cruise terminal and I saw no harm in trying it. Maybe the wind was not so strong there and if it was, the only thing that would happen is that the ship would be blown into the anchor basin, the place where I would have to turn the ship anyway to line up for the other dock. As luck would have it, it breezed up even more and we slowly drifted away from the cruise terminal. No way was I going to get close enough to give the mooring lines ashore. So I let the ship do its own thing and with the wind blowing on that big funnel, the Prinsendam slowly swung around into the wind and with a little help of the engines we ended up nicely in line with the container dock. This dock is basically the same as the cruise terminal only without the building. 15 minutes later we were happily alongside. This was a cap-less docking as I call it, as the wind was blowing so strongly over the bridge wing that it was not possible for the chief and me to keep our uniform caps on. 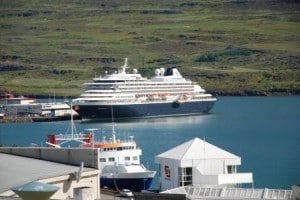 The Prinsendam during the 2008 call at the cruise terminal. 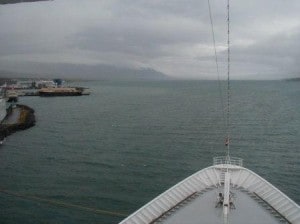 The Prinsendam during this 2009 call at the container terminal.

It remained breezy throughout the day but that also kept the rain away that could be seen coming over the mountains to the South West. Akureyri is a district town where a lot of the commerce of Northern Iceland is located. It is known as a major in and export centre and it is an important fish processing centre. There was more than enough to do for the guests and, even with the less than summery weather, the reports upon return were very favourable. In the mean time I was trying to figure out what this wind would mean for our sightseeing tomorrow. The whole coast was fogged in but I was supposed to go sightseeing for 3 hours North of Islafjordur our next port of call. With a bit of luck this NE wind would blow it all away and I can do what I was scheduled to do.

Departure was less of an issue than arrival. Keeping the nose in the wind, we came sideways off the dock and then it was a matter of a kick ahead and off we went. The pilot, who had during arrival and departure been busy with making Icelandic noises in his VHF to the linesmen ashore, felt sorry for our stay as normally the weather was much nicer. I think we used all our good weather credits at the Top of the World and we will just have to live with it.

Tomorrow we are in Islafjodor, a little bit further to the west and hopefully we can see it.