Today was our second day at sea while sailing from Spitsbergen to Iceland. After a foggy night we approached Jan Mayen Island around 06.30 and we just saw the Beerenberg coming out of the fog for a few seconds. That gave hope that we would be able to see something and I slowed the ship down to have maximum exposure time while sailing by. The island is about 20 miles long, at least that is the distance that we had to make to get around it. I mentioned yesterday that Jan Mayen is exactly on the line, and thus on the course line, between the exit of Isefjord in Spitsbergen and the approach to Akureyri. So we had to change course a little bit to the West to avoid running straight onto the beach.

We sailed about 2 miles off the coast waiting for the fog to lift and it did so twice and even at the times that worked for us. It was clear a few minutes before the travel guide held his speech and it was clear a few minutes after his speech. While he was talking it fogged in again but that meant he had everybody’s un-divided attention. So we saw something but not that much. However guests where able to take a few quick photos of the Beerenberg volcano towering above the island and thus the proof was in the bag that we had really been there. I pulled the attached photo from somewhere off the internet, for my own curiosity, as apart from the few glimpses and the layout on the chart I could not form myself much of an impression about what the whole island looked liked. 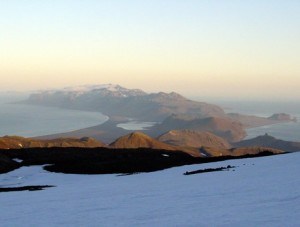 They must have had better weather in the past when the island was discovered. Although the person who really discovered it first is a subject of much discussion. The island was finally named after Jan Mayen the Dutch captain of the Gouden Cath (Golden Cat) who sighted the island in 1614 while on whaling business. He named the island after somebody else but as he reported the islands existence, the chart maker Blaeu in Amsterdam put his name to it when he produced a chart of the area. During the whaling days there were frequent calls at the island but later it returned to its dormant state. Relatively dormant, as the Beerenberg (Bear Mountain) volcano is still active. It’s last eruption being recorded in 1985.

Nowadays the island belongs to Norway and has a Weather and a Loran C (American navigation Aid station) on it. It is manned by about 18 people in the winter and in the summer the number doubles. There is an airstrip but occasionally supply ships are calling there as well. During the second world war it was a part of Norway that was not occupied by the Germans, probably too far away and not of any strategic significance and the meteorologists on the island showed their defiance against Nazi Germany by sending their weather reports not to Norway anymore but to England. Also it would have been quite difficult for the Germans to get there as the British were very vigorously patrolling the waters in and around the Island.

Late afternoon the fog slowly lifted and we could see about four to five miles around us for the remainder of the day and evening. That gives high hopes for tomorrow, the local weather forecast talks about clouds and a bit of rain but no fog, so at least we will be able to see the port when we approach the dock. Tonight is the last night of the midnight sun. We are going below 66o north again and that means that the sun is rising and setting again.