As predicted we had very nice weather today. So sailing in was over a nice and smooth sea with no nasty waves to make the ship go up and down like a jojo.  As shown yesterday in the chart sailing into La Coruna is quite simple as it mainly consists out of one 90o turn from a nearly southerly course to a nearly westerly course. 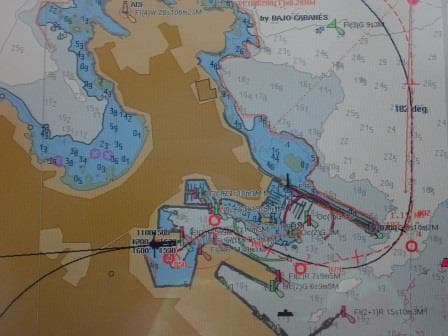 Docking in the inner basin of the harbour.

The only item that made it a little bit more complicated was that the regular cruise berth was occupied by the Oriana of P&O and the Rotterdam was assigned the North dock in the old basin. That it was the old basin was easy to see as the Southside of this basin is where the fishing fleet docks.  Their warehouses look from a distance like a row of garages all with the same blue color. Today there was only one lonely fisherman at the dock so the rest of the fleet must have been at sea.

Thus our dock was a cargo dock but it did not matter that much as it was nice and clean and spacious enough to park all the tour busses just outside the gangway. A shuttle bus moved all the guests between the gangway and the Main Gate and that solved the location issue as well. The port is trying very hard to be a good cruise port but they are very reliant on the summer months due to the nastiness of the winter weather in the Bay of Biscay and the building up of these high swells outside the harbor entrance. (There are some spectacular clips on You Tube.) 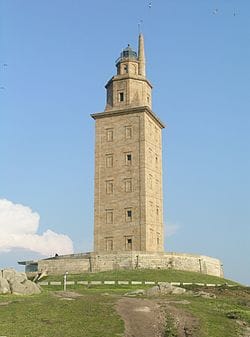 The “Torre de Hercules”. It is not exactly clear what Hercules had to do with this tower but it is a nice name. (Photo courtesy Wikipedia)

Why do people go to La Coruna? A lot of guests want to go to Santiago de Compostela to see the Cathedral and the Pilgrims coming in and going out. If one stays in town, then there is the largest Shopping Centre in Spain to visit (which I suppose is on everybody’s bucket list) but the city also has some fine Museums and the seafood is not bad either. From a nautical point of view the most interesting item is the Torre de Hercules, the local lighthouse which was built by the Romans in the 2nd Century and which still stands.  It was built in the 2nd century so it is now 1900 years old and as it is still in use, it is the world oldest still operating lighthouse. Experts think that this lighthouse was built on top of an even older Phoenician one and thus this area had a lighthouse for a long long time. Understandable as the coast is very treacherous with strong currents and the bad weather winds all blowing in the direction of the land and rocks.

Just after 5 pm. we sailed and once outside, we sailed through the area which is guarded by this lighthouse. A wind force 6 to 7 from the north east greeted us and which kept the waves down but also those very low hanging clouds away that sailors do not like. Here we have warm air going over cold water and that creates fog on a regular basis. Cape Finisterre is not too far away and as was called Finis….. as the Romans thought that this point was the end of the world. Beyond it nothing but fog and bad weather. In the winter time you could believe it.

We will not have that problem tonight when we sail down the Portuguese coast on our way to Leixous. Although a Leixous is a town in its own right, a lot of people talk about Oporto or Porto as that is the major city nearby and a lot more famous.

We are scheduled to dock in the inner port which is nice for the guests as you can walk into town, just by crossing the street. It is not so nice for the Captain as it is a much more complicated maneuver to get to the dock compared to the cruise pier which is located right behind the breakwater. More about that tomorrow.

The weather should be good, partly cloudy skies with temperatures around 20oC or 66OF.