After coming around that corner guarded by our Roman built lighthouse, we followed the coast straight down to the Leixous pilot station. 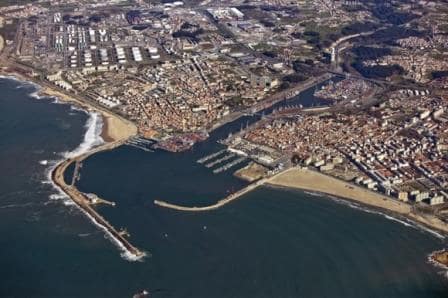 Leixous is an ancient port and although it now has a very modern cargo port, parts of the old breakwater are still in place.  That breakwater guards a larger inner basin with docks at either side but the real port is more land inwards. A port basically constructed by building docks on either side of the river which flows into the sea at Leixous. This river is called the Douro and further inland is the city of Porto or Oporto.  It creates sometimes the same confusion as we have in Florida. Is the ship docking in Fort Lauderdale or in Port Everglades? It is Port Everglades but as the larger city of Fort Lauderdale is next to it and has the airport, most people talk about taking a cruise from Fort Lauderdale. Here it is the same. Porto is the main attraction and the signs on the shore side even say Porto Cruise Terminal, but it is not correct, we are in Leixous. 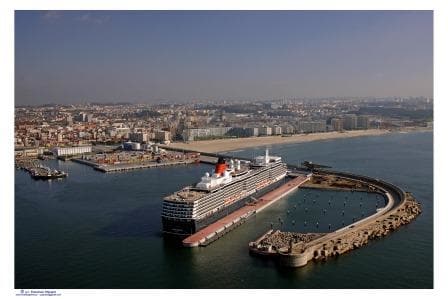 The new cruise pier with the Queen Victoria alongside. (Photo courtesy CruiseEurope.com)

Fairly recently they built a cruise pier inside the south breakwater. Basically nothing but a straight pier sticking out from the shore which can handle 1000+ ft. cruise ships. This cruise pier was today occupied by one of the very big ships of P&O and thus we were relegated to a smaller berth up the river, where we just fitted in.  Because we docked on the river, there is no room to swing so the ship was turned on arrival and went astern upriver until it could go sideways to the berth. By the time we were docked there was not much room left between bow and stern, but we fitted in, and that is what counts. For the guests it was better, as here at least you could cross the street and be in local Leixous while at the cruise terminal there is nothing unless you take a very long walk. 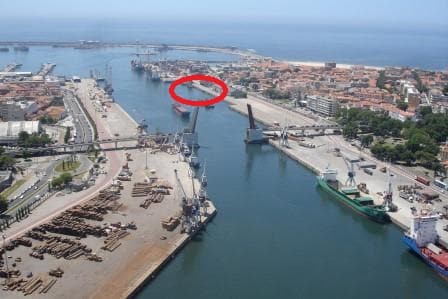 The ms Rotterdam docked exactly in the gap in the pier at the right hand side.

The challenge with the berth we docked at today is the tide. The sea pushes deep into the port and up the river and there is a tidal difference of about 12 feet maximum but today it was about 9 ft. (roughly 3 meters) and the water that brings that difference in height pushes straight along the ship, both when ebbing and flooding.  Thus when the ship enters the port and it has to swing around, it has all this tidal current moving around the ship and pushing in all sorts of directions. You need to adjust for that, while at the same time you go astern up a fairly narrow river with cargo ships at either side. The P&O captain was the lucky one today; ours had to work hard for it.

The current was also detrimental to me today, as I had the plan to lower a lifeboat into the water and to let the school class play. However with a strong tide running it is not really safe to come back under the blocks to be picked up again and thus I had to defer it to another day. We kept the boat on embarkation deck and explored the mysteries of the lifeboat inventory.  The trainees have studied this stuff at school but what they do not learn is how to train the crew of the lifeboat in these things and how to answer unusual questions.  As most of our hotel crew are not sailor’s per-se, you do get questions which a mariner does not expect as he/she is already trained.  A standard one is: where is the toilet…… ? Well there is no room for it as it is an emergency device but you have to be ready for these and other questions and that forms part of the training. (Another good one was from a lady working in the shops: do you have a power socket in the boat, so I can charge my cell phone ?……………)

Most guests went 10 miles upriver/ inland to see Porto which has a lot of history and a complete historic area (the Ribeiro) which is listed on the UNESCO world list.

With everybody on board we sailed at 5 pm. and now we are heading for Lisbon. Again straight down the coast following another Vessel Traffic Separation System which consists of an outer and an inner part. Because we are sailing from one Portuguese port to another, we are allowed to take in the inside / coastal route. Had we been coming from a foreign port, then we would have been forced to take the longer route. Why? Basically because the Portuguese only like vessels that have been cleared already by them in their territorial waters.

Weather for tomorrow, about the same as today. Partly Cloudy but clearing to blue skies in the afternoon. Temperatures should reach the low 70’s oF. or mid 20’s oC.