With one day to go, today it was the big day, as the ship was handed over by Fincantieri Shipyard to Holland America Line. The ship is more or less finished and thus there was very little work going on.

We have on board 1043 crew who are on the crew list and we are expecting another 40 today. On top of that I estimate that we have approx. 200+ support staff on board, which includes a large number of trainers and quality control managers and such diverse groups as Public Relations and wine experts. In the coming days a lot of these people will leave the ship port by port but I believe that the President of HAL and some of the Vice Presidents are staying on board until into next cruise.

Last night there was a cocktail party and subsequent dinner to say thank you to the new build teams of Carnival and Holland America Line. CCS (the new build team Carnival Corporation) oversees the whole operation as Carnival Corp is basically paying for the ship after which the Brand, Holland America Line is operating it. Holland America Line is supervising if it all gets installed according to specification and is then responsible to get the ship setup to HAL standards so we can sail and deliver the product. There were several speakers at the party, Keith Taylor, Orlando Ashford and Stein Kruse with thank you’s and observations but the most important occurrence was the recognition of our new build manager for the Nieuw Statendam. 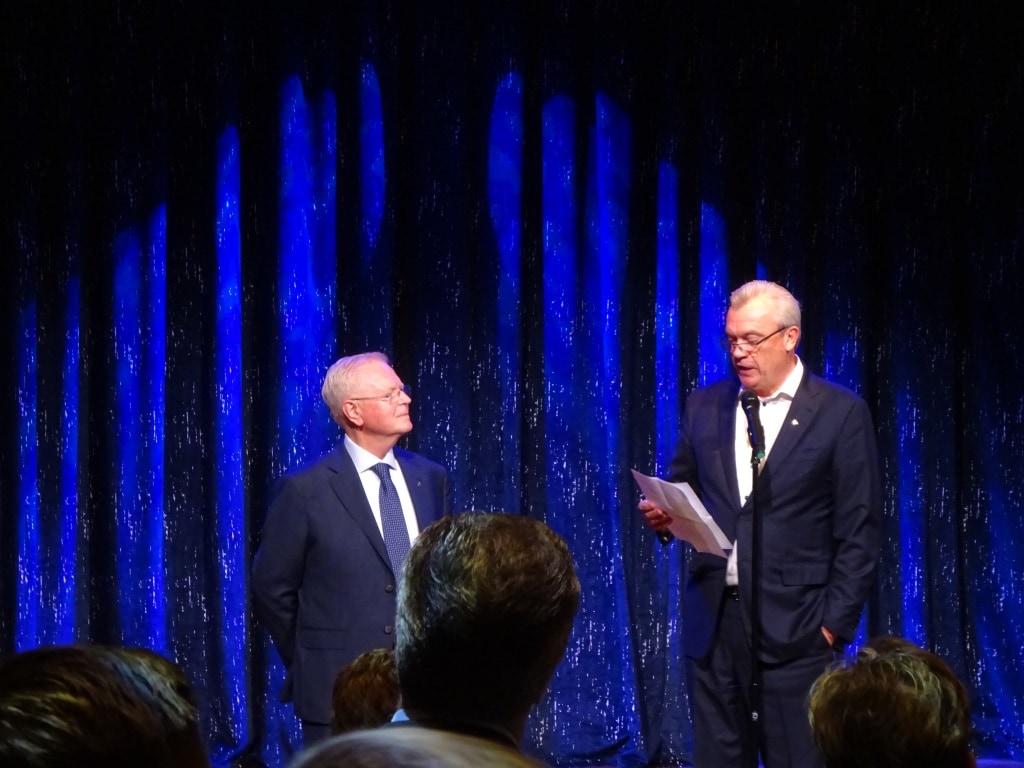 Mr. Jan Koller, Newbuild Manager and 50 years with Holland America Line. To the right Mr. Stein Kruse who needed notes as he went through Jan’s whole career and there were more Dam-ships to mention than he could remember.

His name is Jan Koller and he is also this year 50 years with the company. And that is a long, long time and not many employees reach that number as either you have to start very young or stay with the company until well past retirement time. But Jan started young, in 1968 we still had cargo ships and his first one had the real Dutch name of Gorredyk. (Gorredijk is a town in the Netherlands and all the Holland America Line cargo ship names had a dyk ending) Jan went through the ranks, stayed on the fleet until he was an established Chief Engineer and then moved shore side when the newbuilding of the R class started. And he has been New build manager ever since. I know Jan since he was 2nd engineer on the new build of the old Noordam in 1993. Mr. Stein Kruse made a very nice speech and went through the whole career of Jan, which was by us all much appreciated because 50 years is a milestone. Jan has promised that he will also supervise the 3rd Pinnacle Class which comes into service in 2021. By that time he will have served the company for 53 years. 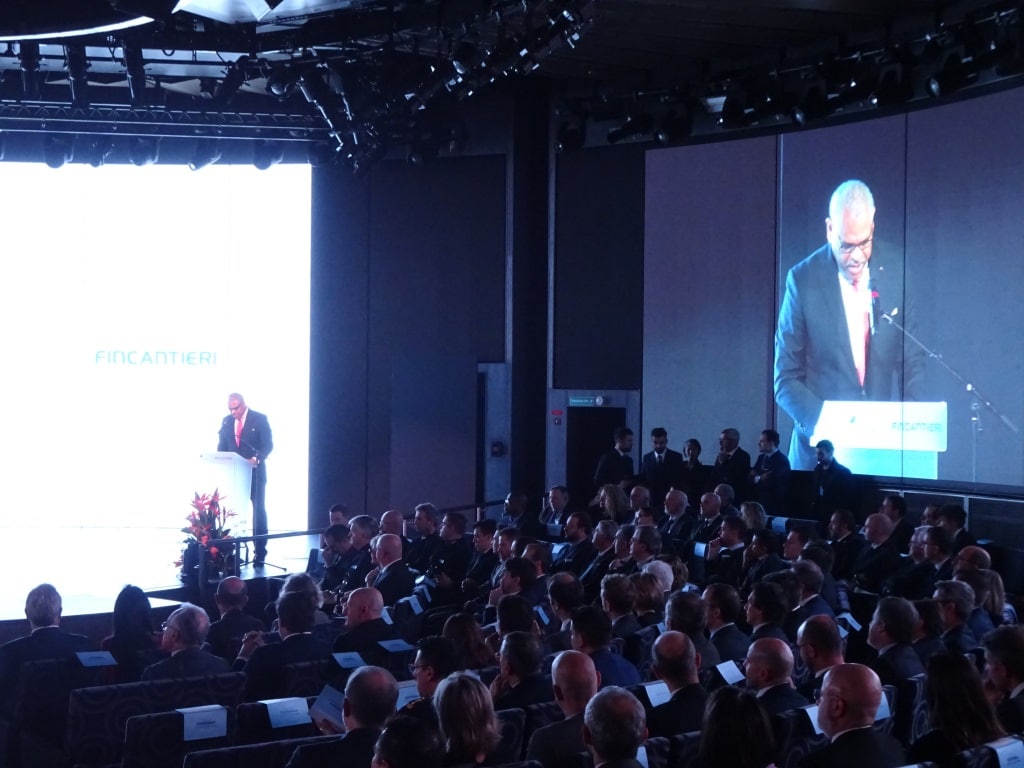 The handover ceremony was planned for 11.00 hrs. and by 09.30 a steady stream of invitees started to arrive. For that purpose the big tent on the dock side was used to check everybody in. Once on board they could go to the Main Stage where at the entrance Service Staff verified your name against a list on a tablet and then directed you to the correct seating area. Lots of shipyard security around but also some “suits” who were clearly special security and later on it became clear that they were attached to the Vice Minister of Italy for Transport and infrastructure.  They must have thought the ship was really safe as they spent a lot of time focusing on the breakfast setup in the Lido.  The Stage was set up with two stands, so Italian speakers spoke from the portside and company speakers in English spoke from the starboard side. The captain made a speech while standing in the middle and I thought that was very symbolic. 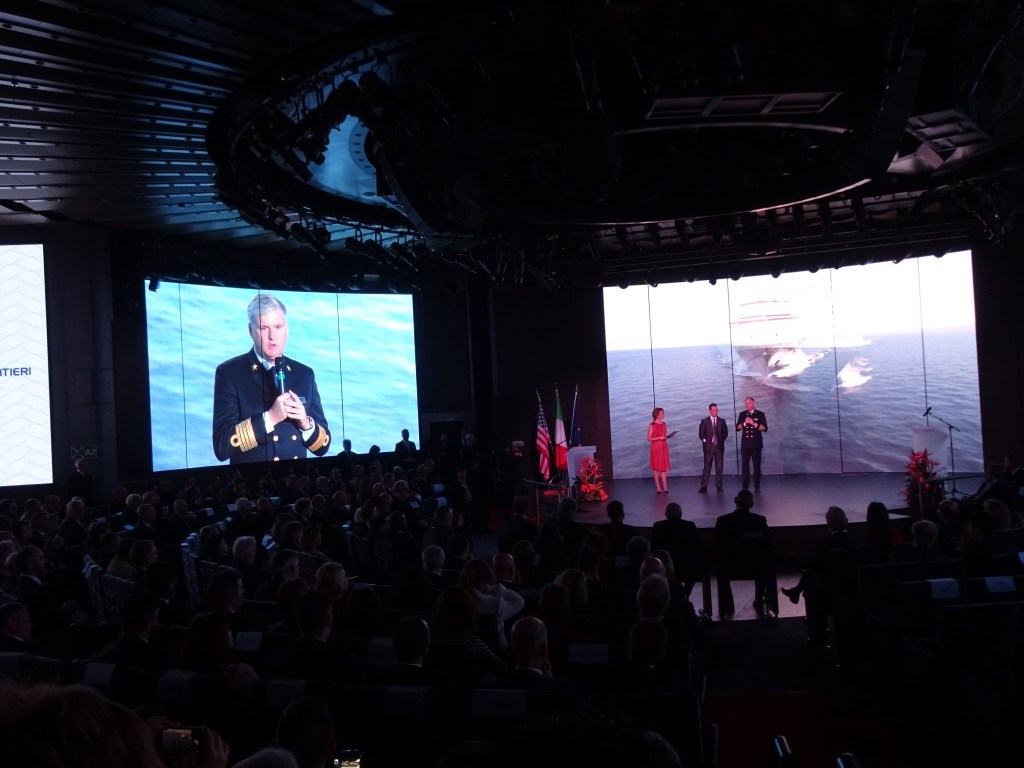 Captain Sybe de Boer during his thank you speech. The lady in red was the Master of Ceremonies, the Gentleman in the middle the Director General of Fincantieri Marghera,

It was not just about the High and the Mighty today; the crew was not forgotten and basically the ship is theirs tonight. The shops will be open for inspection, there will be games in the Casino and there will be two shows in the Main Stage performed by the cast who ended the handover ceremony this morning. 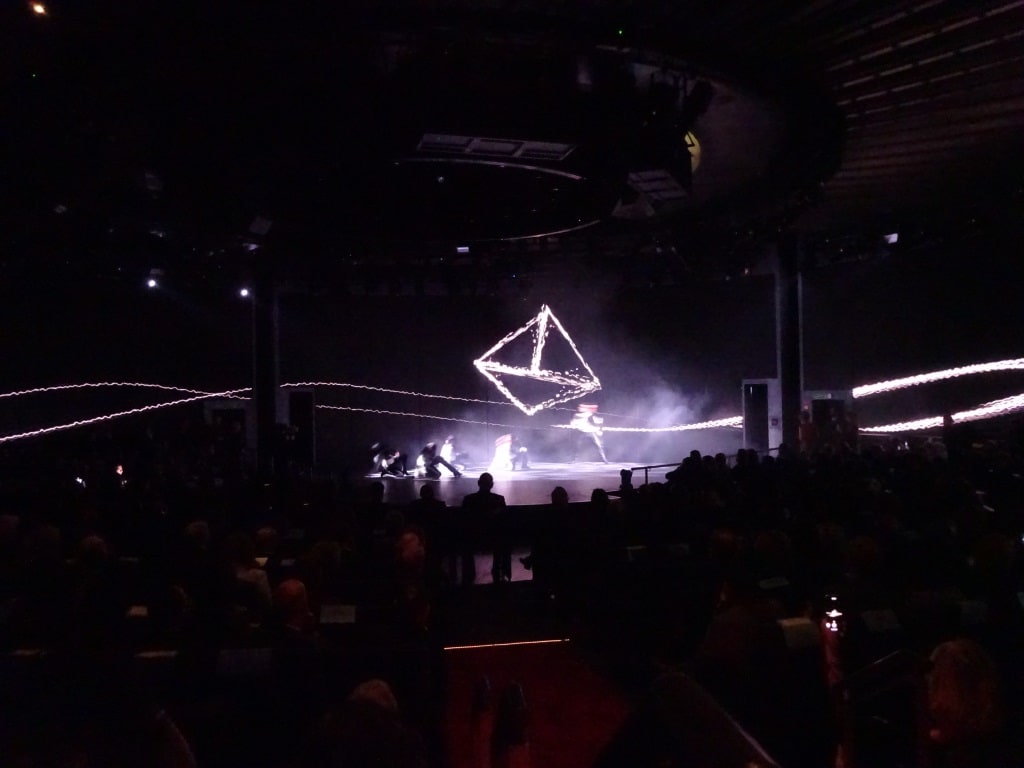 The Dance and Light show performed at the end of the ceremonies. The company is called Humanity and they will perform for our crew tonight. Please note the light effects. With this wonderful stage the lights curve 270o around the audience. It is almost as if you are in the show itself.

Tomorrow should be another sunny but chilly day with 7oC /45 oF but with some wind so it will be chilly again. As mentioned yesterday we should be sailing at 11 am.