Today we had a sunny day but there was a bit of wind and that turned it into a “crisp” day. But good for the work that still needs to be done. The yard is very busy with removing the last containers full with carton and other packing materials from the ship and cleaning up the dock side in general as tomorrow there will be the handover of the ship. And it would be quite handy if everybody could walk to the tent on the dock without having to stumble over all sorts of equipment.

After the party last night and a later start this morning because of it (Breakfast available at 08.00 instead of 06.30) the full focus is now going to sailing out and getting into the regular cruise routine. So today we had our first Navigation Briefing where the Sr. Navigation Officer took the whole navigation team, augmented with the Chief Engineer, The Environmental Officer and the Security Officer, through the route we will follow. And that from dock to dock with everything in between. The Chief Engineer is there for propulsion and fuel issues, The environmental officer for verifying that the ship complies with every rule while going from a to b, and the Security Officer as he is in charge of the gangways and needs to know what will be available and how to set up his security systems. 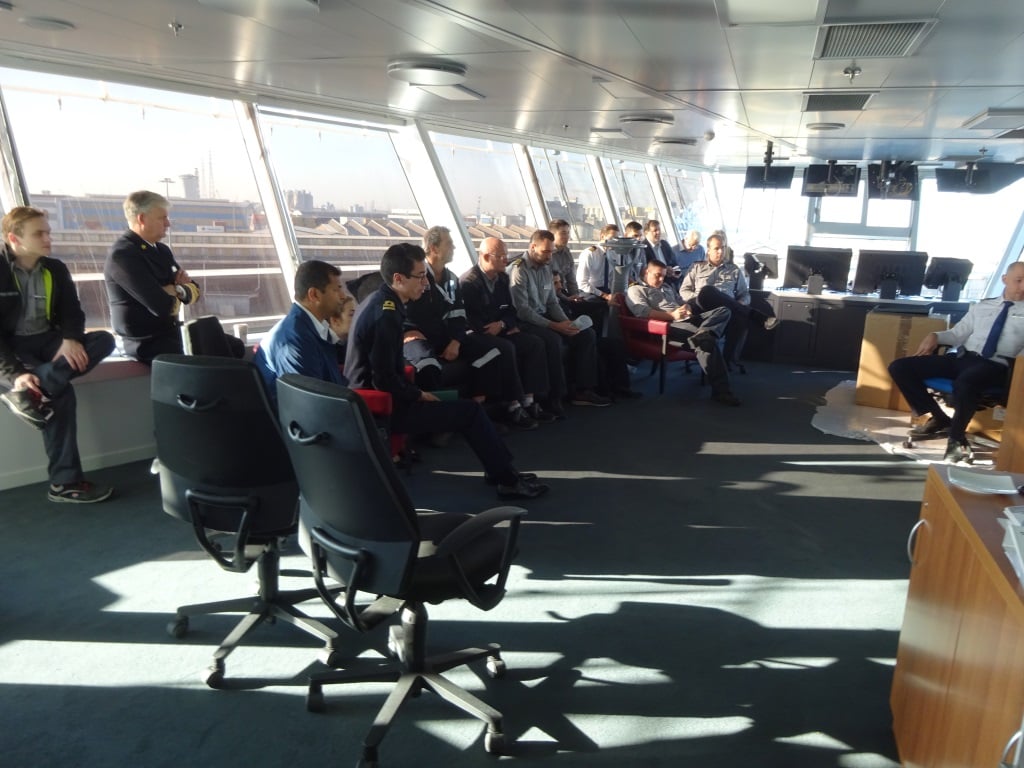 The Bridge Team with all the officers present. The Captain is the 2nd. from left, Chief engineer is sitting next to the (bald) Environmental Officer and the Staff Captain is in the red chair. The meeting is about to begin.

The plan is (subject to change) to sail from the yard on 30 November at 11.00 hrs. and then go with a slow speed through the narrow channel which leads from the Yard to the Open Sea. We will have two pilots and several tugboats. The latter as a safeguard as we will be maneuvering with the ship; for the first time since the sea trials in August. Once outside we sail to the Venice entrance where we hope to be around 14.45. This time depends a little bit on PR photos of the ship. But the plan is to be docked around 1700 hrs. and then we will have an overnight in Venice.

Slowly but steadily more and more Higher Management is arriving. We now have on board Mr. Mickey Arison (and it does not go any higher), Mr. Stein Kruse who is in charge of the HAL Group within Carnival (Holland America, Seabourn and P&O Australia), Mr. Orlando Ashford President of Holland America Line and Admiral Keith Taylor who is the Exe. VP of Marine Services for the HAL Group. His function might need a small explanation as he is not always in the spotlight. When Mr. Stein Kruse created the HAL Group back in 2013, there were two main branches created as well; The Brands (the individual companies as the Guest’s see them) and Marine Services which is the branch which supports the Brands. Keith Taylor retired as an admiral from the USCG, hence his title. I am a bit old fashioned so I believe that titles once given stay with you as an indication of your achievements. 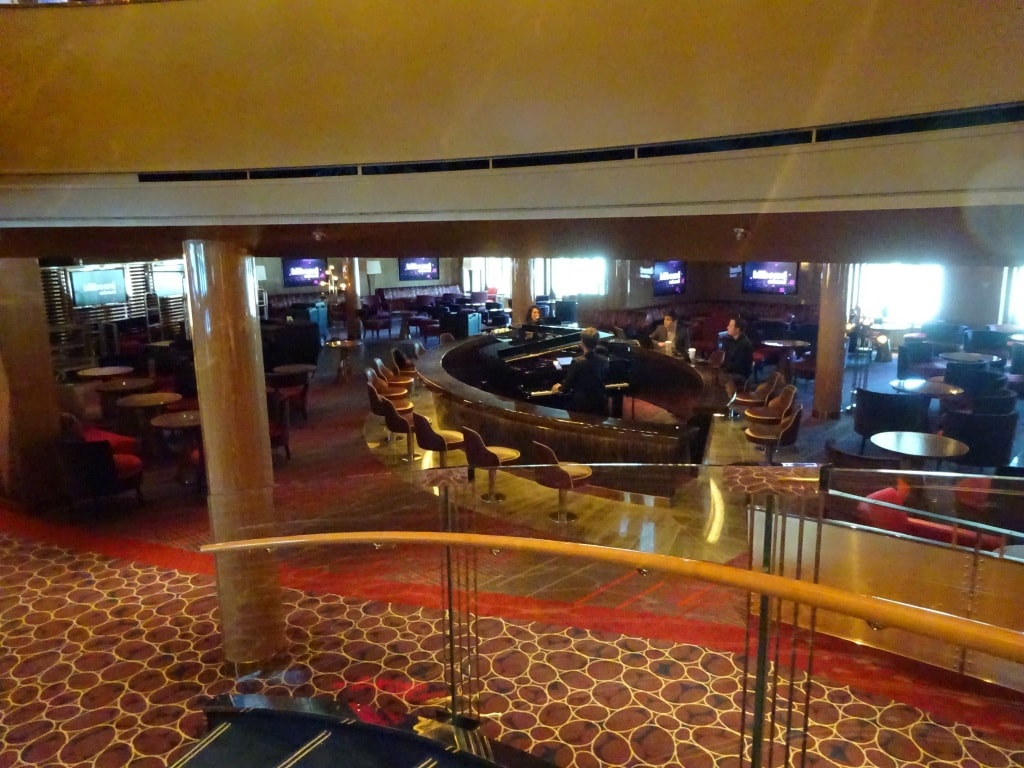 With everything close to ready, the artists are moving in and we see rehearsals going on. This is Billboard on Board with the dueling pianos. There is a training coach with them to ensure that Billy Joel is going right and not wrong until the routine settles in,

Under the Exe VP, there is a Vice President for the Holland America side of Marine Operations (read the nautical side) his name is Eric Chamberlain and he is an ex USCG Captain. Then we have a Sr. Director called Capt. Rik Krombeen (his bio is on the blog site as he came from within) and then we are far enough down the totem pole to come to the Captains, which includes me.

That is only the nautical side as we also have the technical side and the Hotel side. The latter is by far the largest as the Hotel department on board is the largest of course and thus is there also a large support staff shore side. Starting with a Sr. Vice President called Michael Smith and then going all the way down to various support staff.

The one person who is still missing from this list is Mr. Arnold Donald who is in charge of Carnival Corporation which controls all the Brands under the Carnival umbrella. He is expected tomorrow. 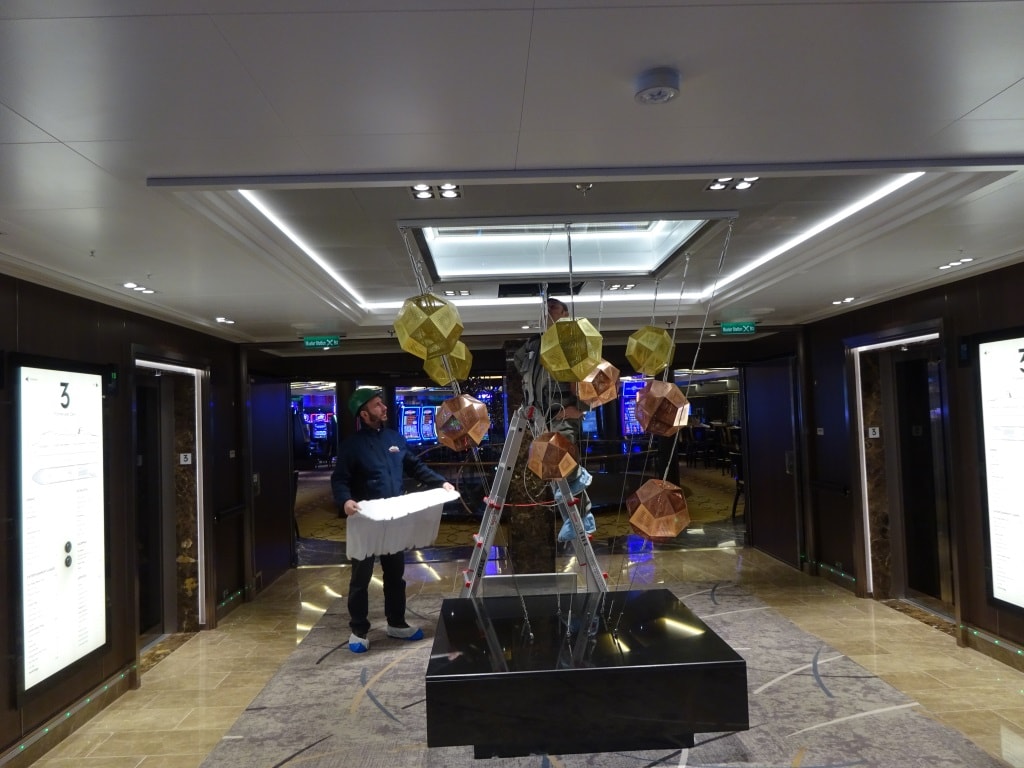 Two carpenters from the yard busy with the finishing touches of the last major piece of art that was still missing. 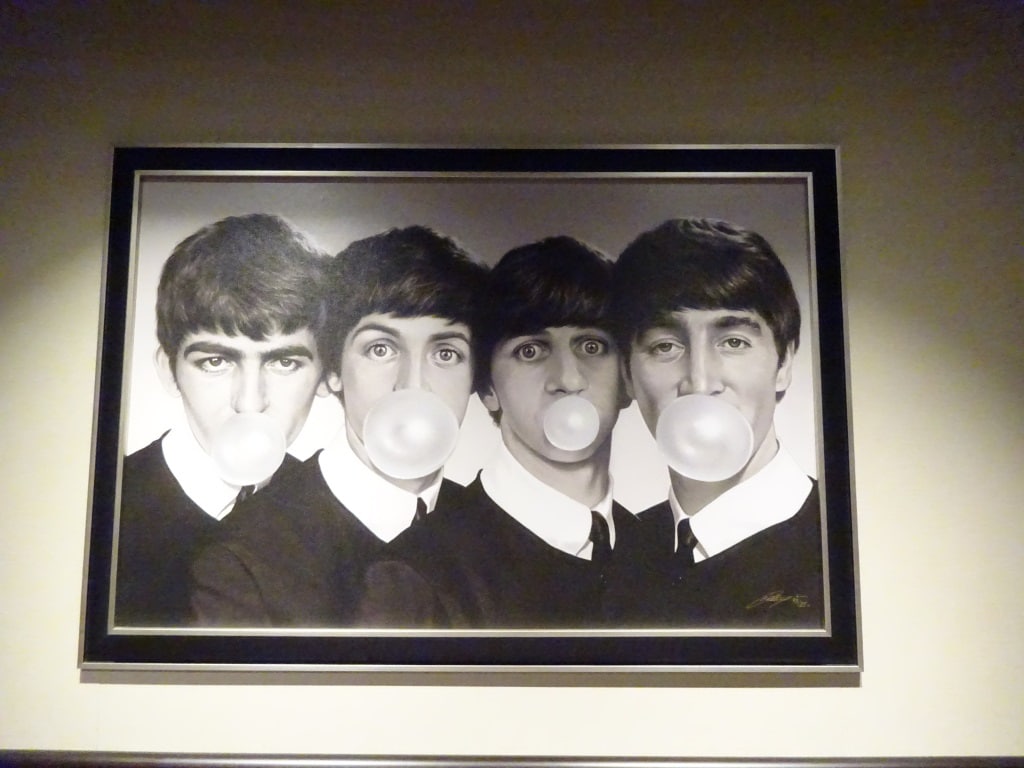 The Beatles, also known as the Fab. four. Looking at the hair style, this photo must have been taken in the early years.

A much simpler piece of art hanging in the staircase is a picture of the Fab Four, showing off their chewing gum skills.

Weather for tomorrow, another sunny day with little wind but the temperature is going down to 8oC or 46oF. It is time to leave.