It was still blowing 25 to 30 knots and I decided to take a tugboat as the weather information received from the shore side was: let’s say inconclusive.  Traffic Control advised that it was wind still in the port and port control talked that it blew “about 15 knots”. Thus we are better safe than sorry and a tugboat is cheap insurance against bumping into something when swinging around in the docking basin and going astern to the berth. To get to the port of Santa Cruz you approach via a Vessel Traffic Separation scheme.  That is a sort highway at sea that was implemented a number of years ago for very good reasons. The body of water, with the island of Tenerife to the West and the island of Lanzarote to the East, is used as a thoroughfare for ships that are on the North/South routes from Europe to Africa and vice versa. On top of that, Santa Cruz is a bunker port with many ships at anchor and thus there is a lot of traffic moving all over the place and not always in regular patterns. On top of that there is a lot of ferry traffic and thus enough reasons to implement these highways at sea to keep the opposing traffic flows apart from each other. So we were coming up, being Northbound, on the starboard side of this system and had to cross over to the West to get to the pilot station for a 06.00 pick-up.

During yesterday I had slowed down, to adjust for the correct arrival time and thus we arrived together with our two friends that we had been overtaking slowly during my watch yesterday. The one that was also destined for Tenerife went there for bunkers and was guided to its anchorage after we had obtained our pilots.  The way they bunker over there, is that there is one big tanker at anchor, which acts as the mother ship. Two or three smaller bunker boats, normally with a capacity of 2 to 3,000 tons, fill up alongside and then move to the ships at anchor to provide them with fuel. Once full, the ships continue their voyage. The anchorage that is being used is in the lee of the island of Tenerife and thus sheltered from too much wind and from the swell. That together makes it possible to conduct safe bunker operations most of the time. For ships as the Prinsendam that dock in the port, the bunker boats come alongside inside the harbor. We will also get one, to fill us up with 1100 tons of Heavy Fuel oil and that will last us for the coming three weeks. 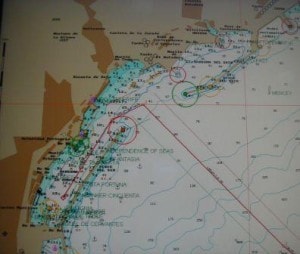 The port layout of Santa Cruz de Tenerife. The red (course) line that is laying perpendicular on the port entrance is the course line that goes straight across the Vessel Traffic Separation Scheme to the northern lane.

The port  is a very nice one, with a very long breakwater to the south and a slightly shorter breakwater curving to the East.It is the main port for the loading of fruit and other produce for transport and as it is the main entry port of the island, everything imported is being landed here as well.  The south part of the port is mainly used by ferries and by the cruise ships. Today there were only two, us and the Silver Wind, but tomorrow there will be four more, including three big ones and they will be parked along this long breakwater pier. With our shorter length and because we are staying overnight, we were assigned a cargo pier on the island side. I was very happy with that as it meant that the guests only had to walk a little distance to the gate, instead of all the way around the harbour from the end of the South Breakwater.

We were happily docked by 07.15 and were cleared shortly after. We will stay here until tomorrow afternoon 17.00 hrs.  This gives the guests the chance to enjoy some Spanish night life ashore, or onboard as we have a local folkloristic show coming on. I know the crew will be happy as those who are mostly on day duty or on the night shifts, can now re –arrange their work in such away that they get the chance to go ashore for a longer period.