This was our second windy day at sea. Wind caused by this high pressure ridge near the Azores and of course also by the ships speed going against it. 30 knots of wind speed and another 15 of ships speed, gave a “stormy feeling” on the outside deck of 45 knots. Thus we had the signs up not to go on the outside decks as the combined wind force would blow you straight over. However that was the whole extent of what the elements were doing to us. The sun shone all day and the ship rode the waves nicely so for everybody it was a nice day at sea. We were sailing about 90 miles from shore and most of the day we were busy with over taking two ships that were going at almost the same speed. So it took a looooong time. On the port we had a fully laden tanker on the way to Rotterdam and on the starboard side a bulkcarrier heading for Tenerife, most likely for loading fuel. Each ship about a mile away from us; so we could safely sail in the middle.

I took the watch today for two hours as the chief officer, who is the head of the deck department wanted to take all the deck officers for a luncheon in our Pinnacle Restaurant. The company encourages this as it is an option for bonding and a sign of appreciation for the hard work that they do. We have a company phrase for that: Family Makan. Family denotes the closeness of the team and Makan is the Indonesian word that best translates into “good eating”. Although I have now been out of watch keeping since 1991 when I was promoted to Chief Officer, I still like it. The quietness of the watch, the restfulness of the ever rolling ocean and the ship moving silently through the seas. Even when nothing is happening I still enjoy the occasional stint on the bridge. My wife cannot understand this at all and calls it “as boring as watching paint dry”. But then I have my doubts about the scarf tying and napkin demos she used to give when working as World Cruise Hostess. All to their own, I suppose.

On a stretch of open ocean, watch keeping mainly consists of keeping a good look out for other ships and in this case also the good behavior of our two neighbors and ensuring that the ship stays on track. The ship runs on auto pilot and the position comes from GPS and that is easy work, you only have to keep an eye on it. 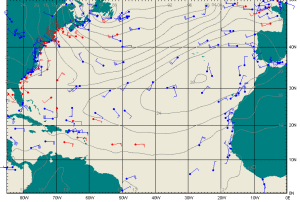 One of those little dots off the African coast is the the weather report of the Prinsendam.

Another little job that helps pass the time is the regular weather observations. Every six hours the bridge watch officer sends in a weather report, which, via a relay system is received by nearly instantly by all the world’s meteorological shore stations. Although the weather is followed by satellites around the globe, the observations of the ships are very valuable as they are the ones who are sitting in the weather and not above it. The observations are directly used by the shore side to see if the computer model that generates the weather chart is correct, or can be fine tuned with these ships observations coming in. Especially in areas off the beaten track, such as Antarctica, each observation is very valuable. All these observations are plotted on a chart and can be found on the internet. If you sail in an area where there are no other ships around, it can happen that you are observing your own weather report. For the rest I get my weather forecasts mainly from the internet, where somewhere there is a site for whatever need I have. However all that information comes from somewhere and the computer models now in use are for a large extent based on all those observations that the ships have made in the last 150 years.

Tomorrow we are in Santa Cruz the Tenerife. I will be at the pilot station at 06.00 hrs and if the wind remains as it is, then I will have to call out a tugboat for docking. We are assigned a cargo dock in the corner, but this time it is the right corner as it is the closest berth to the dock gate. Normally the cruise ships dock at the breakwater pier, but on the second day of the call, some of the big boys are coming in and they need the space of that very long pier. Sometimes it is good to be small.