This was our 2nd day in this beautiful port, although today we had to share it with about 12,000 other cruise guests. The morning started with rain showers gathering at the horizon near sunrise and we were all fervently hoping that they would come over the ship. We have problems getting the salt and sand off the decks and a good downpour is much more effective than a sailor with a small garden hose. Plus rain water is free and our own water we have to pay for. Either by loading it from the shore side, or by making it ourselves. However our hopes were in vain, the clouds drifted away to the south, missing the island altogether. No wonder that the islands are so barren here.  For the guests it turned out to be another great day. Not too warm, due to the northerly breeze and that made it perfect sightseeing weather. 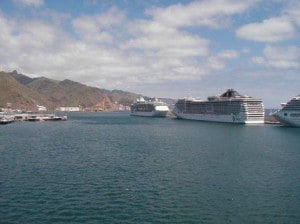 The North end of the South Breakwater with tow of the large cruise ships visible.

Today the big boys came in. Independence of the Seas, Costa Fortuna and MSC Fantasia. Together with us and the Oceania that accounted for over 12,480 guests if all ships were filled to capacity. I announced this event before we arrived in the port and hopefully the guests took the hint and did their shopping some time during the first day.  It is not much fun to descend with 12,000 others onto the same T shirt shop. The large ships were all lined up at the Breakwater pier, which has a length of over a1000 meters. Not a bad place to dock but a very long walk to town, if you happen to be the one taking a cruise on the Independence of the Seas as she was docked at the far end.  Like us, the other ships took the opportunity to bunker fuel as the prices are quite reasonable here. So during the day we saw the bunker boats scurrying from one ship to the other. 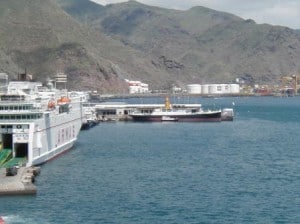 The old mail and inter island vessel La Palma.  a regular size ship for her days. To left is visible a modern ferry of only medium size that serves the inter island service now. In front of her is parked the new pilot boat for the port.

An anomaly in the port was the very old interisland passenger/ferry La Palma. Built in 1912 for the Spanish company, Compania de Vapores Correos, she was one of the first steam ships on the interisland service. Later she sailed for the Compania Mediterranea and even later she was turned into a restaurant. In that way she survived quite well, retaining its original triple expansion steam engines. The plans are to convert her back into an interisland vessel but now for cruises, with her original accommodation still intact. Stabilizers and a bow thruster are supposed to be added and I think they will have to do something as well for the lifesaving, as currently there is only a lonely rowing boat on the stern. Our pilot expressed deep reservations about this coming to fruition as he said that the old accommodation was very austere with only a very limited First class capacity.

Work on her had come to a halt anyway as the current times did not allow for much funding coming in.  Still it was nice to see such a ship from nearly 100 years ago, from a time where that size was not considered small at all.

We left on time and as the MSC Fantasia was waiting for later returning guests, we pulled out first and sailed out of the port within 5 minutes. The pilot left quickly and we were on our way to the island Lanzarote. This island is also part of the Canary Islands and is located a good 100 miles to the North East. Tomorrow morning we will arrive at the pilot station of Arrecife at 06.00. We will be together with the Corinthian II, the MSC Fantasia and the Island Escape, all coming in after us.

The weather should be a continuation of the day, so with a lot of sunshine but as the wind is supposed to die off it might turn hazy later in the day.