In the morning the wind finally veered all the way to the East and became a following wind. The velocity reduced to 10 knots but only for a short while. Shortly after we entered Kaiwa channel between Molokai and Oahu and the funnel wind effect caused the wind to breeze up again to nearly 20 knots. The swell slowly diminished and by the time we came in the lee of Koko head it had mostly disappeared. Koko Head is a protruding cliff that comes out from the land in the same way as Diamond Head does, which is the next cliff/mountain top to the west. During the night the two are not dissimilar and the accumulated sailor’s wisdom in the pilot guide warns to be careful here. Many a ship took a turn to starboard too early, thinking it was sailing past Diamond Head and seeing the lights of Waikiki beach on the sb side. Not every captain realized the mistake on time and some ships ran aground in this area. We did not make that mistake, as we had read the pilot guide of course and we turned to starboard once we were past Diamond Head and saw the port of Honolulu on our starboard side.

Coming from the East you cannot see Aloha Tower as it is obscured by several large (banking?) buildings that dominate the sky line. It was not until we were well inside the harbor entrance that the famous tower came into view. We were assigned to dock at pier 10, which is right under the tower. This is from where all the famous ships in white sailed to and from Hawaii. Especially the Matson liners, whose dock scenes have been recreated with large murals in the baggage hall. Being a dock from the past, it is not that long and that means that most modern cruise ships have to dock at a cargo pier. Thus we saw the Star Princess docked away from Aloha tower when we came in. The Statendam nowadays classifies as a small ship and thus we were the perfect match for the Aloha Tower dock. 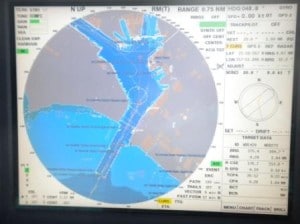 To the dock at Aloha tower is only a few miles from sea, so the approach can go quite fast if you keep the speed up a little bit.

By 14.30 we were docked, 15 minutes earlier than I expected by courtesy of a quick maneuver and not having to wait for a shore gangway. At this dock we have the option to hook in a main deck shore gangway and then the guests go down to street level by escalators. However due to a decision making process that did not involve me, it was decided that the ship would use its own gangway on the street level.

I was all in favor of that one, as it goes much faster with docking. With a fixed shore gangway you have to park the ship on an inch, and as shore side is never able to decide at once which inch is the correct inch, it can take awhile. With our own gangway we can simply stop where there is space and it does not matter if that is a foot more one way or the other. Plus our gangway is at street level and thus there is no fuss with escalators or elevators. 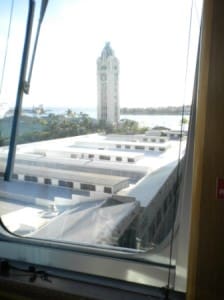 Aloha Tower looming over the ship. Just to the left you can see the Star Princess. she is too large for the Aloha Tower piers and was thus parked at a cargo pier.

Within 10 minutes after the first mooring line went ashore, our guests could stream ashore as well. They were stopped for a moment to receive a Hawaiian Lei, courtesy of the ship, before they continued with their invasion of Honolulu. Quite a few went directly to Hilo Hatties to stack up on Hawaiian shirts etc. Among those was roving reporter Lesley, who under the excuse that I desperately needed a Hawaiian shirt, came back with two dresses for herself for the deck party tomorrow night. We only have one party, so the reason for two dresses eluded me completely, but as we “saved money by spending it”, there was not much I could say. I saved at least $ 60 dollars yesterday due to the discount on the dresses and as a understanding husband, I can completely follow this logic.

We will be here for an overnight and sail tomorrow evening at 2300 hrs. I have asked the HOD’s to arrange the schedules for the officers in such a way that everyday somebody has at least a day or a night off, and can have some R & R. It was breezy when we arrived but tomorrow should be a wind still day with temperatures in the high seventies with sunny skies.