After a windless night we started our 2nd day in Honolulu. During sunrise we were greeted by a brown band lying over the city against the hills.  Smog in Honolulu, unexpected; it really does not go together with an image of pineapples and hula hula girls. But there was no wind during the night and thus it happened. During the morning a slight breeze picked up and the brown layer dissipated. I had a funny experience the night before, as I had gone ashore for a few hours to dinner in a restaurant right outside the dock. Friends were drinking wine but I told the waiter that I was staying on water as I was driving. When the bill was being settled, he asked for my parking ticket so he could validate it for me. When I said that my ticket would be a “little bit” too big for him, the answer was, no problem, we deal with large cars & limousines as well.  When I then pointed to 800 feet of “car” parked behind me, realization set in that my ticket might be a bit much too handle for the restaurant. It was funny to see the expression on the waiters face as he had never come across that one before. Neither had I never been given the opportunity to validate the parking fee for my ship. 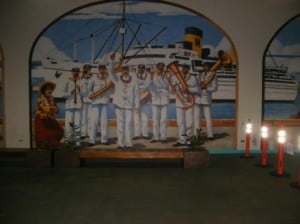 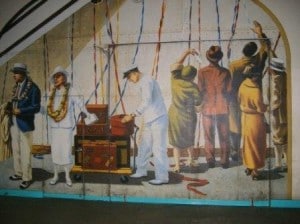 Coming back I had to admire the murals in the passenger terminal. They showed scenes from the heyday of Hawaii travel, when the only way to get to and from the island was with the white liners. Matsonia, Lurline,  Malolo, Montery, Mariposa. The arrival of the airplane killed this service off eventually and the Matson Company now only operates cargo ships. Still the terminal is still there and now has these murals depicting the good old days.

The ship settled down for a quiet day of routine work until I threw a spanner in the wheel. Once a month we have to hold an un-expected and un-scheduled fire drill/exercise to test the alertness of the crew. My challenge is always is to keep it un-expected. The ship’s crew is a closely knit community where everybody knows everything about anything and every little deviation from the normal routine is noticed. Plus the crew expects an un-expected drill when the time is due.

This time I managed to get the un-expected bit in. I had discussed the occurrence about 5 days ago and as then nothing happened in the next 4 days, it had drifted to the back of everybody’s mind. Then when suddenly multiple smoke detector alarms went off in a public room, nobody could be certain whether it was for real or for exercise.  The response was as trained and multiple teams descended on the fire location. For the guests it was noticeable this time, as we closed all the fire screen doors on all decks in guest areas for two complete ships sections. This is standard procedure as it locks the fire in so it cannot spread. For the guests it is a strange experience as suddenly that long corridor has a closed door in the middle and the atrium is surrounded by a wall of steel where normally a large open space is located.

As the simulated fire was located in the Wajang Theatre, the guests still on board could see the whole operation in full swing, as the area near the atrium was changed into the situation centre. From here the “attack on the fire” was taking place.  4 fire fighting teams, medical rescue team, evacuation team, stretcher team, passenger assist team, extra hose handlers, and back up personnel. Within 10 minutes about a 100 crew were on the scene and involved in one way or the other.  When all was over I apologized to all the guests for the inconvenience caused, but the feedback was only positive.  I think a few crew were not that happy, as after a night on the town, they had expected a lay-in in the morning and now that darn captain decided to get them out of bed at the ungodly hour of 09.30. 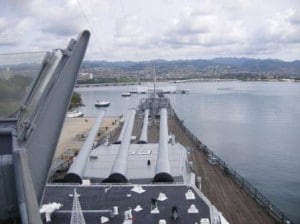 The Arizona Memorial as seen from the battleship Missouri. (All photos by roving reporter Lesley)

Most guests were ashore, including my lord and master Lesley who went visiting the Battleship Missouri and the Arizona Memorial in Pearl Harbor. It was a perfect day for all ashore, the temperature had still not returned to Honolulu standards and as it was a bit overcast, making it a perfect day ashore. We stayed until 23.00 in the evening and the Hotel department changed the Lido pool area into a great Hawaiian Cook out. Followed later by song, dance and games with the Event staff.

Sail away was a short but scenic affair, with nearly wind still conditions and a smooth glassy sea. Tonight we sail around the Island of Molokai and will then arrive at 06.30 at the anchorage in Lahaina. Perfect weather has been predicted, partly cloudy and no wind but there is always swell.  A long ocean swell that runs into the port, thus it might be a day with challenges.