It was warm today but it was also a sort of perfect Naples day. Not a cloud in the sky and when the guests walked ashore they could see the sun brightly shining on the City and the Castle which guards the city since about 800 years or so. They are still working on the metro. 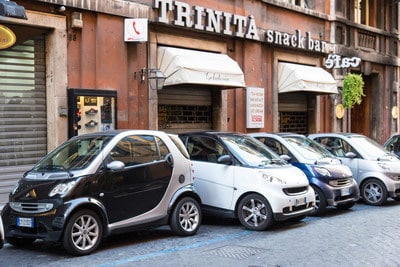 If you car is small enough you can always find a space. Even in Italy.

There was a very large hole in front of the Stazione Marittima when I was here in the autumn of 2017 and they have since progressed to making the big hole a bit smaller. And if you make the hole smaller what do you do with the available space: you put cars on it. I think that here in Italy they are all striving together to get the Guinness world record book of how many small cars can you put in one space. Most Italians, who live in the city, buy a small car so they park sideways and have two cars fit in one parking space. While the rest of the world gets 200 cars in a car park of 200 spaces; the minimum for Italy is at least 400 not counting what then still fits in areas with white – no go – stripes. Everyone can park on these stripes, as it seems that the Italian Traffic Code says, that No Go means that your neighbor can not go there, not you.

One of the reasons for the slow progress of the metro is because of the slow digging. With each inch they go deeper into the ground, they find more and more of the past and that has to be excavated and researched first. Not just what is found from the Romans days, (old fortifications and even ship’s cargo) but also from later dates as Naples had quite a turbulent history.

I pulled this one off the internet as it shows the ruins of the days gone past. It is part of the original settlement of Naples and it is the plan to keep this on view once the metro is finished and it will then be surrounded by a park.

My Italian is not that good but I saw not too long ago a headline in the newspaper indicating that the construction of the Metro had gone over budget. I am not amazed. How can you budget without knowing how much you are going to find back from the old days, apart from knowing that it will be plenty? So I expect it will take some time before we can walk off the ship and use the new station. 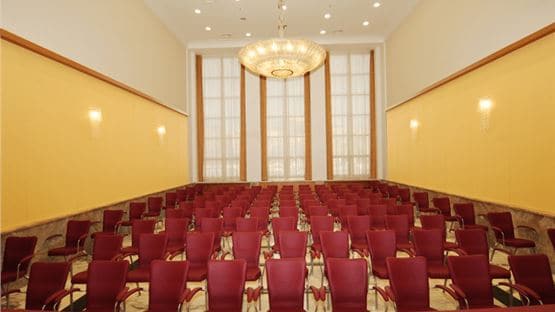 If I re-collect correctly, this used to be the first class customs hall. As in the good old days a first class suitcase did not mingle with a 3rd class bag.  There were separate handling areas for the classes.

I tried this morning to get into the old part of the Terminal. The Stazione has been refurbished in the last few years and there are now restaurants and shops but certain areas are still original and used for meetings and civic activities. But the old architecture in Mussolini style has not been touched. The rooms were in the old days where the passengers waited in 1st, 2nd and 3rd class waiting rooms or where they went to immigration and customs when arriving. For an historian as me; fascinating to see. But my trying was in vain as all the rooms were booked for the day so I will try next week again.

The way it looked when the terminal was only just built. They want to try to return part of the piazza back to a park as it once was.

The port of Naples has always remained the same. Towards Vesuvius they have added container docks but the passenger terminal and the ferry terminals are still as they were 80 years ago. At the west side are the small ferries going to Capri and the other islands and at the east side the large ferries connecting with Sardinia, Sicilia and Corse. (Plus a lot of other destinations). But the passenger terminal is now the cruise terminal and all cruise ships have to go there. We were by ourselves today but with a bit of organization they manage to get 4 big ones alongside and even more small ones. The port and the city can absorb an infinite number of tourists (going in the city itself or to Capri or to Pompeii) the terminal is another matter. They have made a gallery on each side of the terminal and installed gangways so it is easy to get off the ship. But at each end there is only one Elevator down to ground level. And that elevator does not always works. There (for those in the know) is a personnel elevator around the corner but not really well sign posted. Thus when there are more ships in, the areas around these elevators become a real mobility center with each and every variation of scooter, rollator and wheelchair on display. I have always found it too embarrassing to take a photo but I have seen traffic Jams of irate guests trying to get out or back in the terminal while using an elevator with a mind of its own. And there is very little that can be done about it as the terminal is a listed historical building and they cannot just glue another one onto the outside. 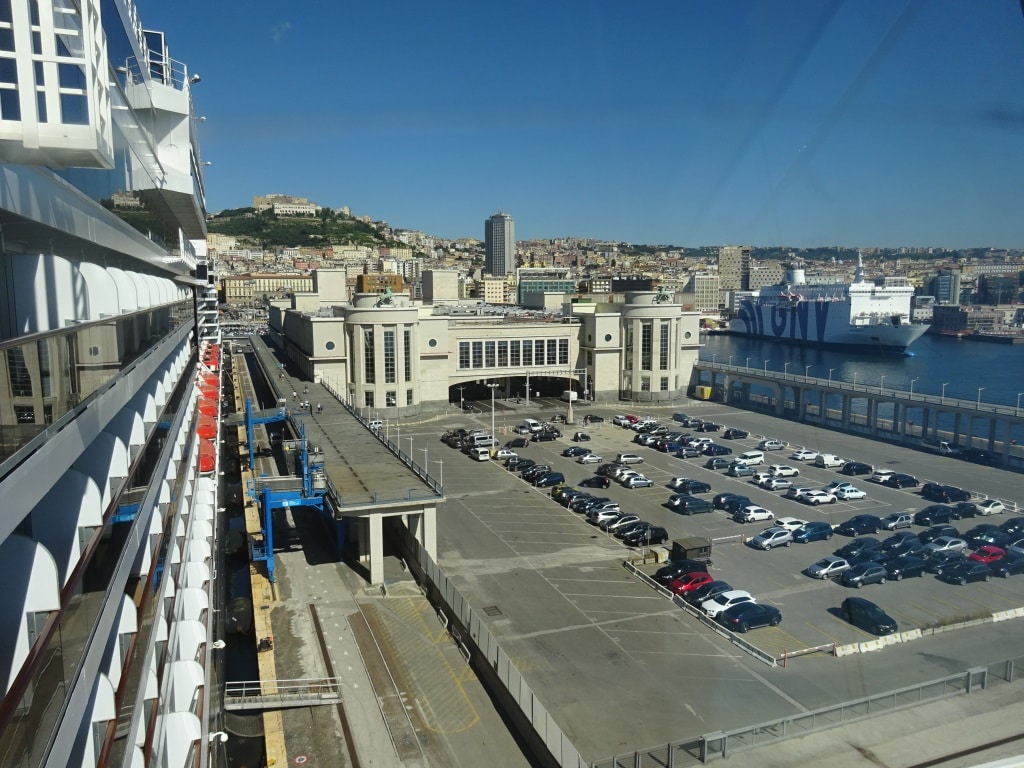 The Oosterdam alongside with the gangway on the catwalk, basking in glorious sunshine. Today the elevators were all working; at least this morning when I was briefly ashore. Note the bronze horses on the top of the roundels. all original from pre WWII. Parking inside here is only for (important) permit holders so there is always space.

Tomorrow we are in Civitavecchia, gateway to Rome. Most of our guests will be leaving us here and the ms Oosterdam will start voyage 656 which will lasts 12 days and will include ports in Greece.

Weather for Civitavecchia: Warm and sunny with 80oF / 27oC and 1% chance of rain.