The nice thing about most ports in this area is that we dock with the nose right into downtown. There is a security gate but that fence is the only obstacle between the ship and the city itself. Today was no different. The ms Oosterdam parked itself right at the foot of the city again and from the gangway it was not more than 800 feet; before you had the chance to be run over by a speeding Italian scooter. “Colour Locale” they call that. I have not posted this time our cruise diagram as I hopped on board right in the middle of the current cruise. After Palermo we have only one more port to call at, Naples, before this cruise ends in Civitavecchia. From there we will start a 12 day Civitavecchia to Venice cruise. 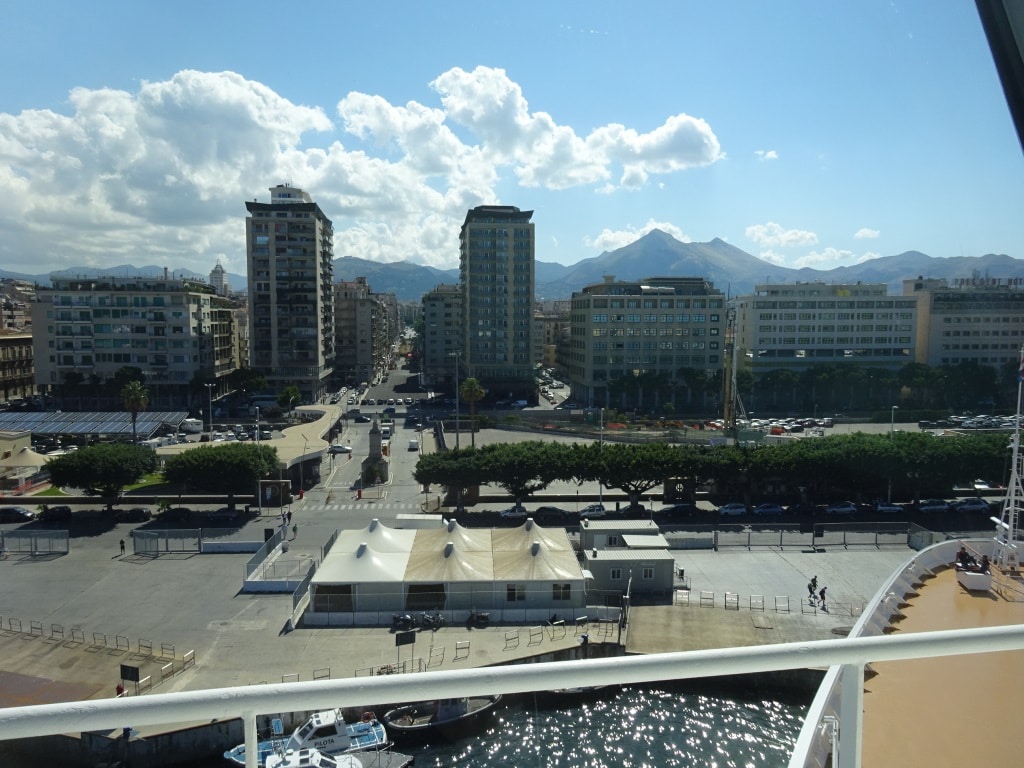 How close do you want to be ? Palermo at your feet.

To my utter amazement we were the only cruise ship in port today and still we docked at a cargo pier. It turned out that the Stazione Marittima is under reconstruction and Restoration. Looking at what is going on; it turned out to be some sort of expansion with fixed marques and new parking. It is clear that the old building from the early 20th century was not big enough for the mega liners. The ms Oosterdam is not a mega liner but we only just fitted alongside one of the old piers right in front of the city. But because we were docked at the cargo pier, we could not look at a beautiful passenger terminal but had to make do with a series of very ugly grain silos that had all seen better days. 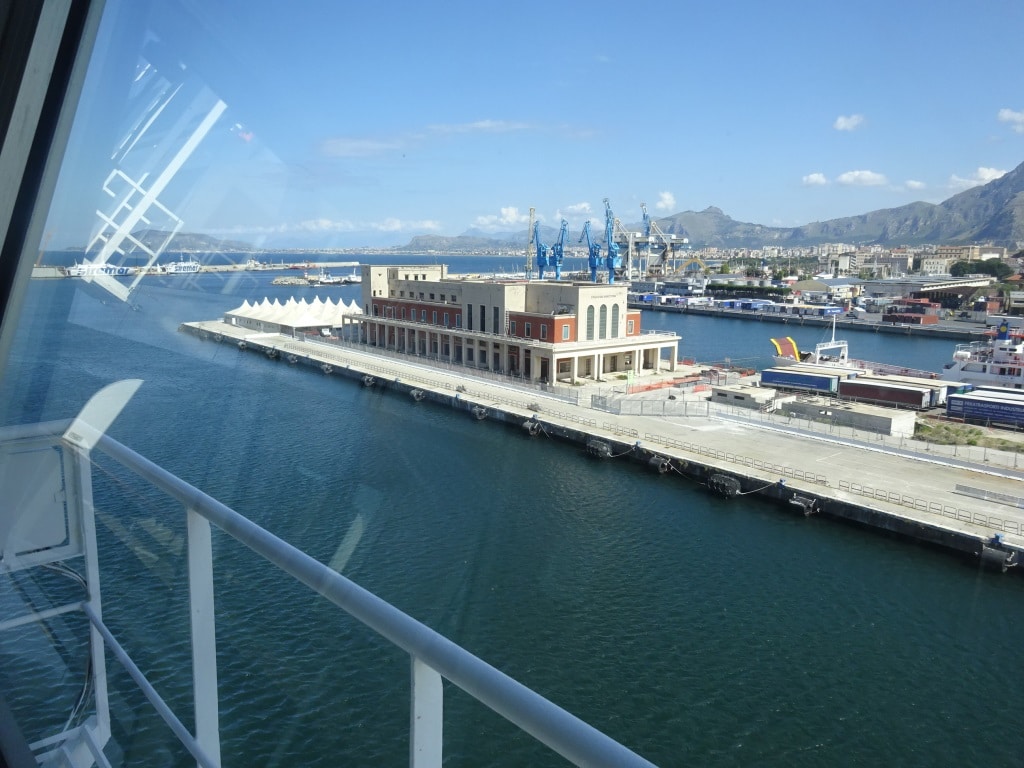 The Official Cruise Terminal, once the regular passenger terminal for ships sailing to the rest of the world. Many Sicilians left from here for America.

Palermo is considered an easy port to get into if you have good ship handling skills and a bit of experience; easy…….. as long as it does not blow hard with wind. Today we did not have much wind and then it is for the Captain an excellent chance to let a junior officer do the driving: as A. not much can go wrong that cannot be quickly corrected and B. it is still difficult enough for a junior to need to have his/her wits about him/her while bringing the ship to the dock. Today it was only a him, as the deck department of the ms Oosterdam does not have a Lady in the team at the moment. Very unusual for our fleet.

So, what is making this such a nice port for training purposes? Well it has a wide open approach, a fairly wide entrance but you have to make two 90o turns to get to the dock. If the navigator overshoots, then the captain does not need to get a heart attack as there is still plenty of room to play with and thus plenty of time to correct. 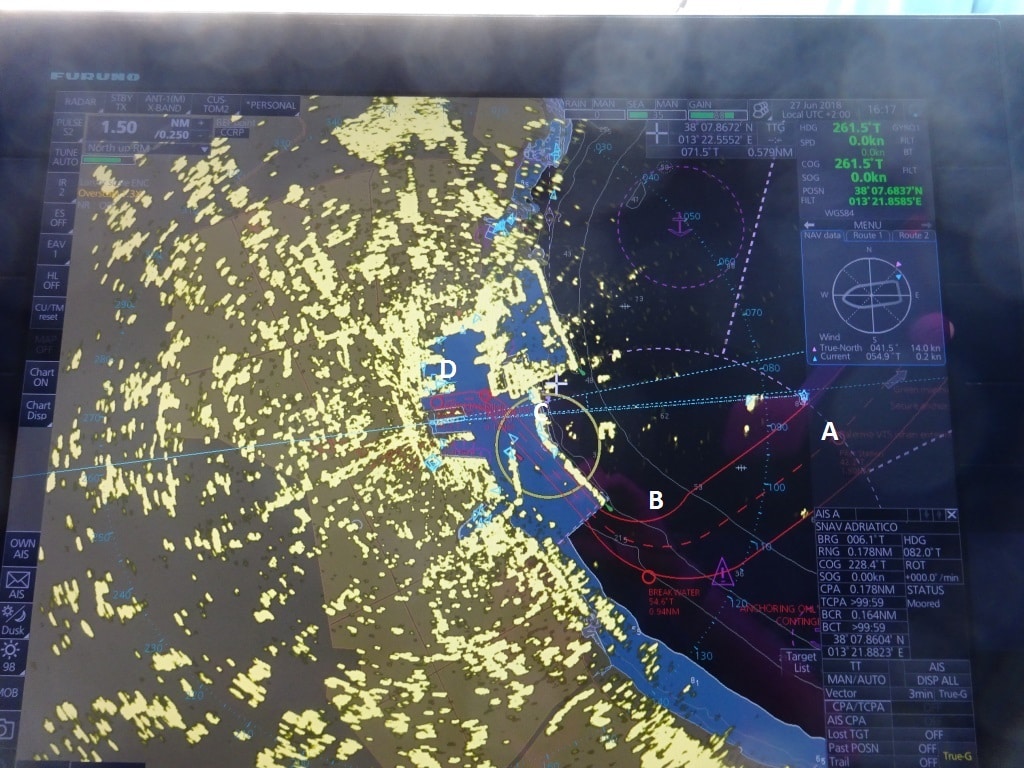 The overview of the port on the nautical chart with the radar overlay.

To plan a proper maneuver you first look at the overall picture. Oversight: for Palermo you have to make two 90 turn’s and slow down from about 12 knots outside to about 3 knots when turning to the dock. Then you start looking at the details by breaking up the approach maneuver. Every captain does it slightly different but I would split this approach up in four significant steps.

So junior has enough on his mind, while pulling at the handles, to make this for him a challenging port while the captain has a plan B up his sleeve for each situation.

What is the plan B at each step?

A = turn the ship around

B = help with the thrusters or the Azipods to control the turn, if the ship turns too fast or too slow

C = there is room to go straight forward in case the turn is started too late and if started too early, one touch of the thrusters and we are back on track.

D = A timely kick to full astern will ensure we do not bump with the nose into the boulevard.

Tomorrow we are in Naples where we once again dock almost in downtown. Only difference is that the Stazione Marittima is much more elaborate and bigger.

Weather for Naples: 28oC or 82oF, no clouds and no wind. It is going to be a sweltering day inside the old town. I hope most guests have opted for a tour into the country side (with sun block 35) or a visit to a castle which is always cool inside.