Valetta with its Grand Harbour is one of the most spectacular ports to sail in and out of and also to stay in. There are hardly any restrictions for a ships size as the port entrance is wide enough and only becomes a challenge if there is a Northerly wind blowing. The entrance through the breakwater has a sort of turn in it, which can be a challenge for long and wide ships if they have the wind full on the beam. That wind would then set them upon the South of East breakwater right when they slow down to go through the turn. During those rare occasions a ship will have to wait outside but cruise ships are seldom affected. Those ships that wait outside are normally tankers which go to Malta dry dock. During our call there was no big tanker in dry dock but two oil rigs and they are not small either. Not so very long but very wide and very high. I assume that they came in on a windless moment.

A cruise ship entering the Grand Harbour. The entry looks almost straight but it has this small turn in it, which is an issue for long ships if there is wind blowing. The two breakwater piers are so constructed that they keep the swell out from any direction.

The ms Oosterdam had come in yesterday morning at 08.00 hrs. and then was scheduled to stay until this morning 06.00 hrs. then it was to hop over to Mgarr at the south east side of the west island called Gozo. There it would run a tender service until 15.00 hrs. and then sail for Palermo where we will be tomorrow morning.

When I arrived at the Oosterdam, late yesterday afternoon, and went up to the Captain’s Cabin to pay my respects it was at once clear that not all was well in “The State of Malta”. Captain Robert Jan Kan (you can find his photo and biography on the blog site under current captains) was concerned about the expected westerly wind which would start to breeze up around noon time and then continue to strengthen. By 14.30 it was predicted to go up to 35 knots and then it is not easy to maintain position in that fairly tight corner with local ferries darting around you. An additional concern, which I experienced while being there with the ms Prinsendam, was that when the wind has been blowing for a while the waves which it has started to generate, tend to bounce back from the West side of the larger island and then you have a real issue with keeping a good lee. On one side you are making a lee to keep the wind out so the tenders can use the gangways at the other side and then that other side gets harassed by reflected waves. Not a good position to be in. 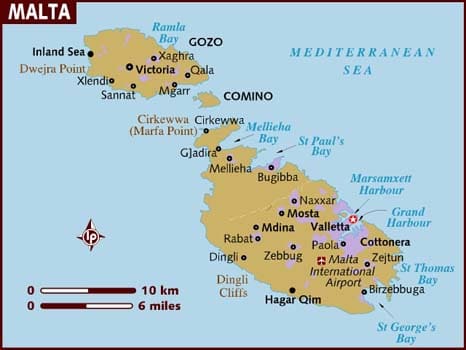 Malta is made up of three larger islands. And when we go to Mgarr on Gozo we anchor with the ship in the narrow passage between Mgarr harbor and the island of Comino.

So it was decided by the Captain to happily stay in Valetta until noon time today. Then we had to sail as our berth was to be taken by a NCL ship which was at the pilot station around 12.00 hrs. The decision was validated this morning at 10.30 when we already saw white caps forming outside the Grand Harbour; a good 2 hours earlier than forecast. It would not have been pleasant for the guests to have been in the tender coming back to the ship as when we left, the wind was building up to a wind force 7 to 8 already.

Gozo is a wonderful little island and very unspoiled, at least compared to the main island which bore the brunt of the 2nd world war fighting, but not much fun if you cannot get back on board your own ship again.  But Valetta itself with its enormous history, nice downtown area and wonderful weather made up for it more in one way. So instead of the guest having to wait for the tender to take them ashore, they could just walk again off the ship and be there. Waking up and having breakfast against the wonderful scenery of the Grand Harbour is already a good reason just to be here. 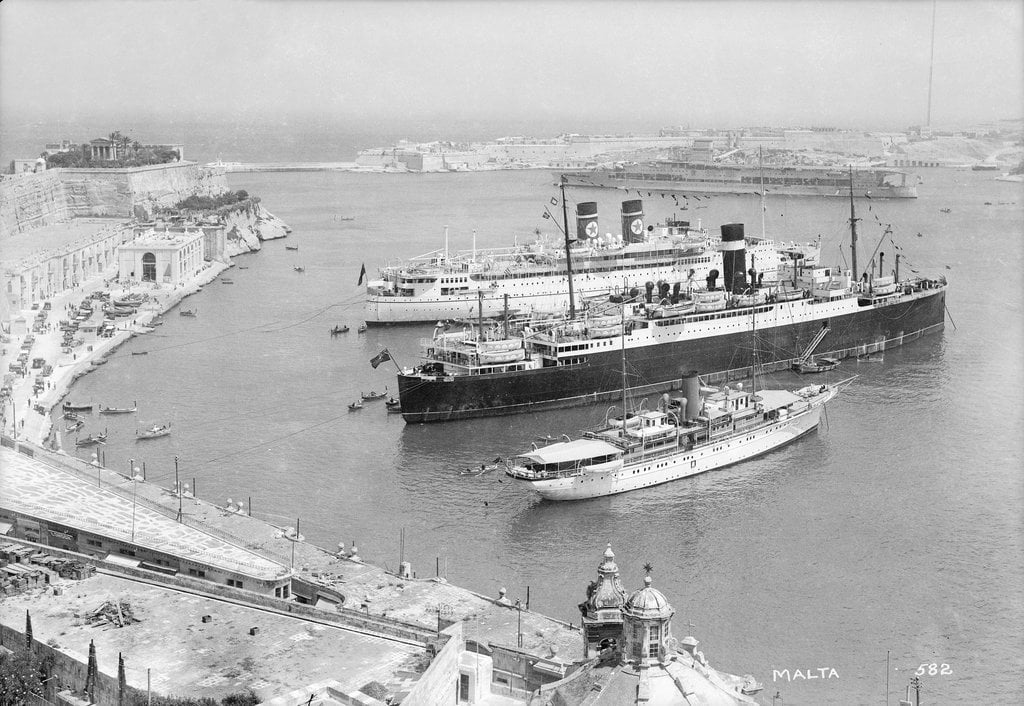 Because of it great harbor, its history and its shelter, cruises have been coming here since the turn of the century. Here we have a blast from the past with the ss Arandora Star of the English Blue Star Line and the ss Letitia of the Scottish Donaldson Line. The yacht in the front is from American owners as far as I know. These ships were anchored “style Mediteranee” exactly in the same spot where the Oosterdam was today.

Valetta was made great by the order of the Knights of the Templar, which still exists in Malta but are now more business men than warrior monks and then it became a strategic harbor for the British Royal Navy until Malta went independent. All were here because the island was so strategic. Controlling North/South routes in the Med. And East /West routes as well. There has been a lot of fighting over it during the last 2000 years. For those who follow the news the area is once again in the spotlight due to the refugee exodus from Africa to Europe. A tragedy for which there is not a direct or good answer, whatever Europe has been trying to do thus far.

So we sailed out at noon time and headed with a gentle speed North West to sail around the West side of Sicily to arrive at Palermo tomorrow morning. A very important port for me, as my suitcase was left behind in Amsterdam while transferring to Air Malta. They are making arrangements to have it forwarded to Palermo.

Now we are sailing against the Gale force winds but they are supposed to abate tonight and by tomorrow morning we should have: sunny skies, 77oF / 27oC and a breezy afternoon.