Our route from Kirkenes to the old landing place of the cruise ships of the early days. A still present path leads all the way up the mountain,.

On departure from Kirkenes we saw wind. Normally we do not like wind but now it might be our friend. A good bit of wind might blow the (rain) clouds away and if so we could see the North Cape. So with hope in our hearts we traveled back up the coast during the night; also reaching our highest point of the cruise and hoping for a bit of visibility. Good news was, it was not completely foggy; bad news was the rain clouds were still enveloping the top of the North Cape. So we had to make do with a small rock formation called the horn or horngrunner in Norwegian which is sticking out on the side of the North Cape. 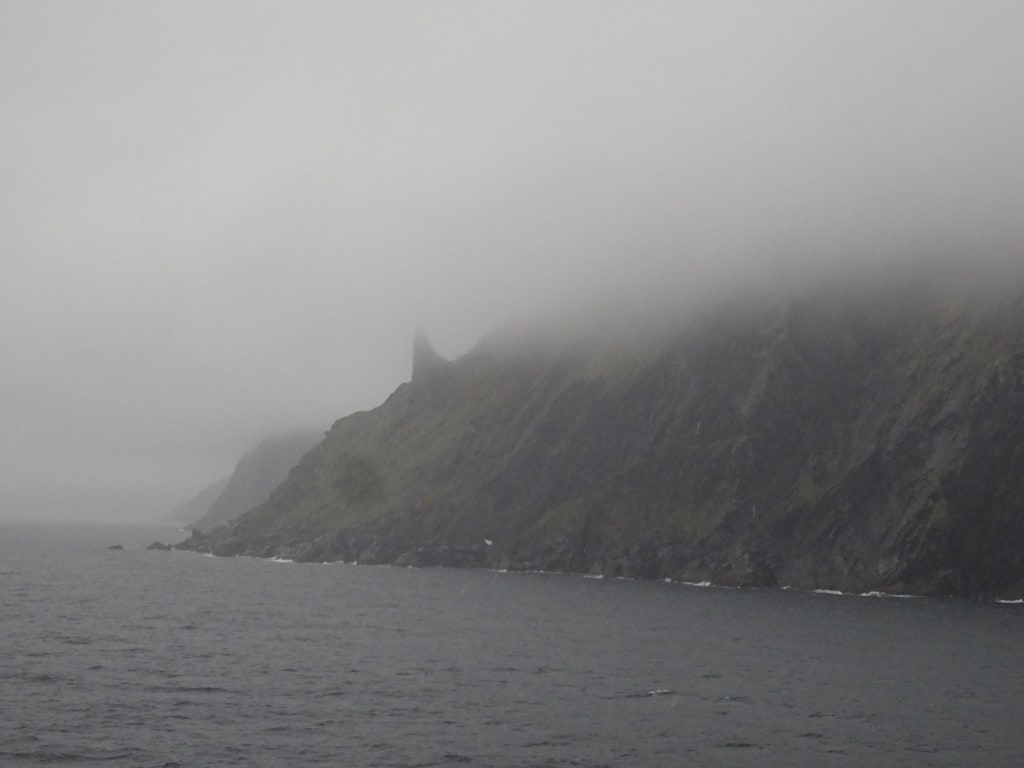 The horn a rock formation protruding from the side of the North Cape.

The one thing everybody could see was the fact that the North Cape is not the most northerly rock of Europe and Norway, but that is a rock formation a bit more to the west. Not so high and not so spectacular. The good ship Prinsendam sailed by with slow speed even stopped near the inlet where in the old days, the cruise ships landed their boats as there is a path/ stairs all the way to the top, and it was not always a short drive from Honningsvag to the North Cape.

It is not an apartment building at the end of the street, it is the Prinsendam.

And then we continued to Hammerfest. Here we were scheduled to arrive at 13.00 hrs. But we had to wait as the Mail boat one of the Hurtigruten ships was not yet ready with loading the mail, passengers and cars. Still waiting for 20 minutes was much better than having to dock at the other side of the bay, where the Aida Sol was berthed. The port authorities had provided shuttle buses for those guests but it all takes time. Once the mail boat had departed, the Prinsendam could dock right in down town. And I mean right in downtown. The gangway was literally an extension of the main street, leading up the hill to the high street where all the shops are. It is not often that a small cruise ship can dominate the port, but today we did. 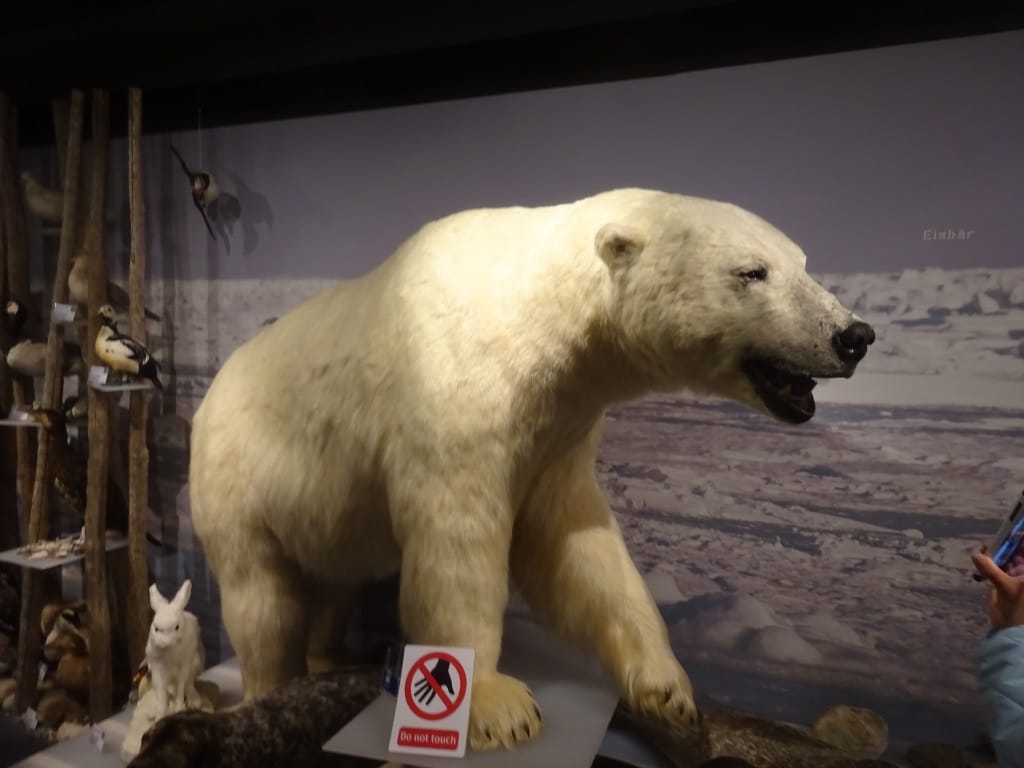 The polar bear is omnipresent in Hammerfet. Not only in the museum but in downtown as well. There is even a polar bear walk, made up by white painted paws on the pavement.

Right outside the dock, is the tourist information which also can make you a member of the most Royal and Ancient Polar Bear Society which is the coat of arms of Hammerfest. I am a member of the order of the sou’wester (Sydney, Nova Scotia, only open to senior mariners) and the order of the dolphin (Sydney Australia, only open to people who drink) and those are on invite only, but the everybody can become a member of the polar bear order, and some 250,000 people have already done so, so I did not join the queue. But it has a nice museum with a full size polar bear on display.

Hammerfest must be a rich town as it is thus far the only place in the world, where I have seen those using Lexus cars as taxis. I have a Lexus at home and they are not cheap. But if you have to pay a lot of money for a ride anyway you might was well sit in luxury. It is an old town or city as it has more than 5000 in inhabitants, just over 10,000 to be precise and is thus a lot bigger than Honningsvag. When you walk around there is not much “old” to see as the Germans burned the whole city down when they retreated from here in 1945. They had used Hammerfest as their submarine base for attacking the Murmansk convoys. Only one chapel survived the burning. 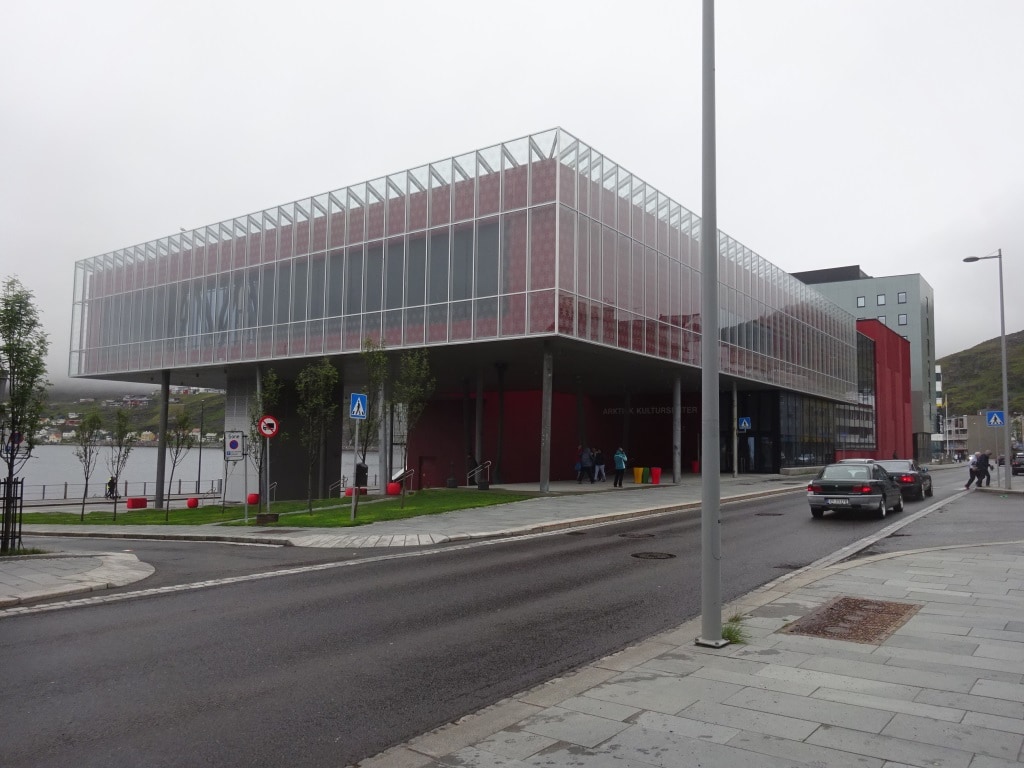 In bright red the Artik Kultur Center. It must make for a wonderful Christmas card, the red against the snow on a dark winters night.

Thus walking through the streets, is basically walking through a small modern market town, Nordic style. There is a museum and thanks to the influx of petro money a large cultural center which dominates the downtown area. No church to dominate downtown, a new, post 1945 church was built on top of the hill overlooking the town. An old grave yard is nearby so I assume that they built the new church on the location of the old church. With two ships in town, the majority of people walking the street were the cruise guests, and thus only German, English/American and Dutch was heard. At least those who were not on tour as the tours take you inland to reindeer and Sami camps and other nature related excursions.

The ship will sail tonight at 21.00 hrs. as the next port of call, Tromso is only just around the corner. That will also be my last port of call, as I will be living the Prinsendam here to transfer to the Oosterdam. There are no direct flights between Tromso and Malta and thus the journey will take me two days. Hence the next blog will be on the 26th. of June. Whatever the weather will be when I reach the Oosterdam. it will at least be a lot warmer than here in Norway.