Maybe some of us have been naughty boys and girls in the recent days as the weather Gods are still not with us. We were all very hopeful while docked in Honningsvag that the weather at the North Cape would be half decent but it was not to be. The moment the ms Prinsendam poked its bow around the corner of the east end of the town area, a dirty grey wall was lying over the water. Due to a remnant of the Gulf Stream reaching all the way up here, the water in the Barentsz Sea can have just a slightly different temperature than the waters more inland. If it is a sunny day than the low hanging clouds that hang around the North Cape burn away and a stiff cold breeze from the Arctic will do the same. Neither was happening today. There was a bit of wind but nothing drastic and a dense cloud formation remained over the North Cape area. So no North Cape to be seen and hence the plan was aborted and we trundled on our next port of call Kirkenes. 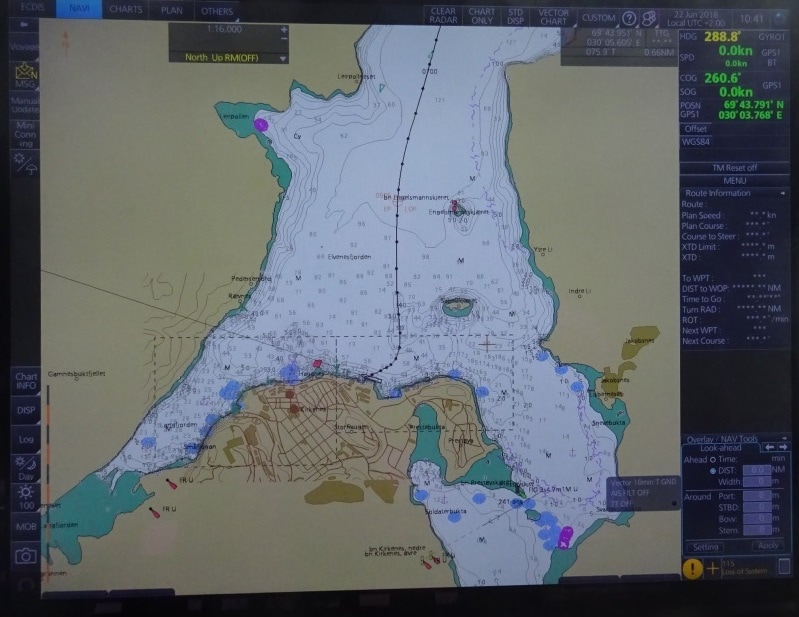 You can reach Kirkenes from open water through its own fjord.

Kirkenes is tucked away deep in a fjord which gives it a nice shelter from the raging elements in the winter. The name of the town is derived from a church built here in 1862 and it means Church Headland. Its claim to fame is fishing like most other Norwegian ports but there is also an amount of mining going on which can be seen from the dock.  Although being very small, roughly 2000 inhabitants, there is quite a bit to see and for a tourist as the town was much involved in  2nd world war and was liberated by the Russians. 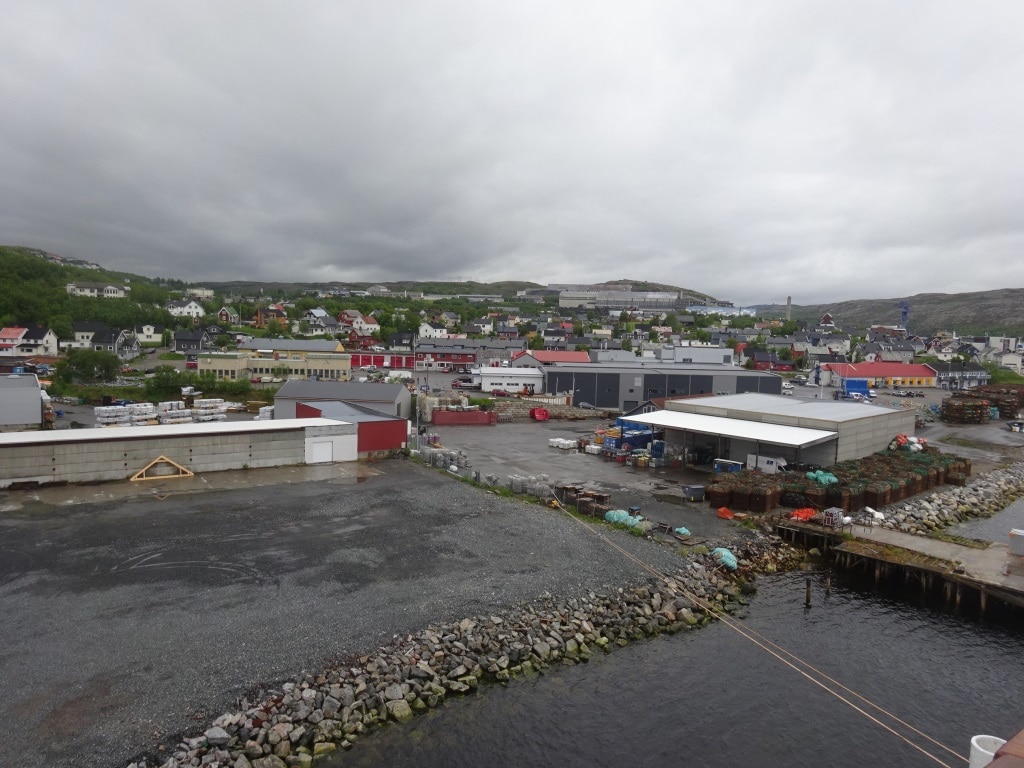 The Red doors are the local fire station and the church or kirk of Kirkenes can be seen as the brown top towering over the town center at the right hand side.

The border is only just down the road. The town is named after the church but when looking from the ship it looked as if at least the port area was built around the local fire station.  I suppose necessary as this area has dry spells as well but taking the weather of the last days in consideration I think that Mother Nature is much faster in extinguishing fire than the Fire brigade. But as it is in most countries the fire brigade does much more than just messing around with fire; they double up as paramedics, and in areas where there is a lot of water, they are often involved in fishing people and items out of the water. Here in Kirkenes they have an extra duty and that is the one of linesmen.  Yes, they were the gentlemen who tied is up this morning. To my disappointment, no roaring fire engines and flashing lights on the dock, not they came walking as the fire station is across the street.  Sensible I suppose as a regular fire engine is quite heavy on petrol consumption. 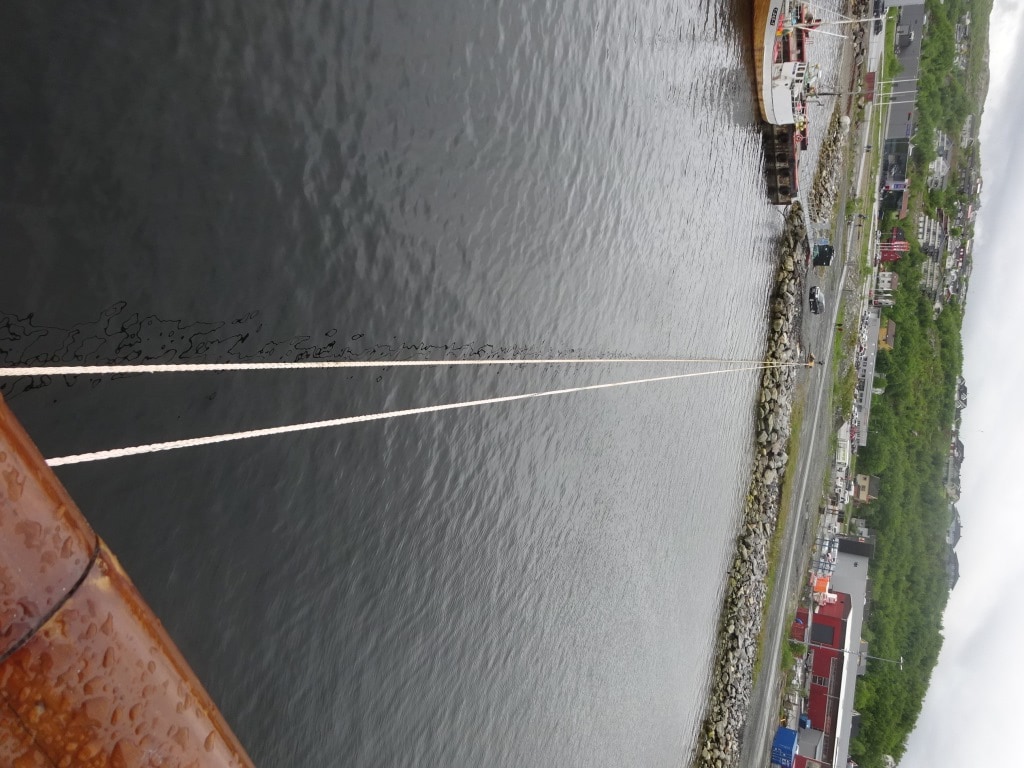 This is what I mean with long lines. It kept the bo’sun and his sailors busy all morning, as there is a good tide over here as well, courtesy of the fact that the port is laying deep in a fairly narrow fjord and that pushes up the water coming in.

Tying the ship up today was a rather long winded affair. Not because of the fire brigade, they were professional enough, but because the dock was too small, even for our Elegant Explorer. And that meant long lines to the main land away from the dock. Most docks in the smaller ports of Norway are created to fit the size of the local ferry system called the Hurtigruten. That was the case yesterday as well. The Costa Pacifica next to us was only alongside with 50% of the hull sticking out and the stern lines were all going on buoys, installed especially for that purpose. And it has been the same in all the other smaller ports I have visited in the past, with the exception of Oslo, Bergen, Alesund and Stavanger, which either have a lot of deep sea traffic or are deeply involved with the North Sea oil drilling. 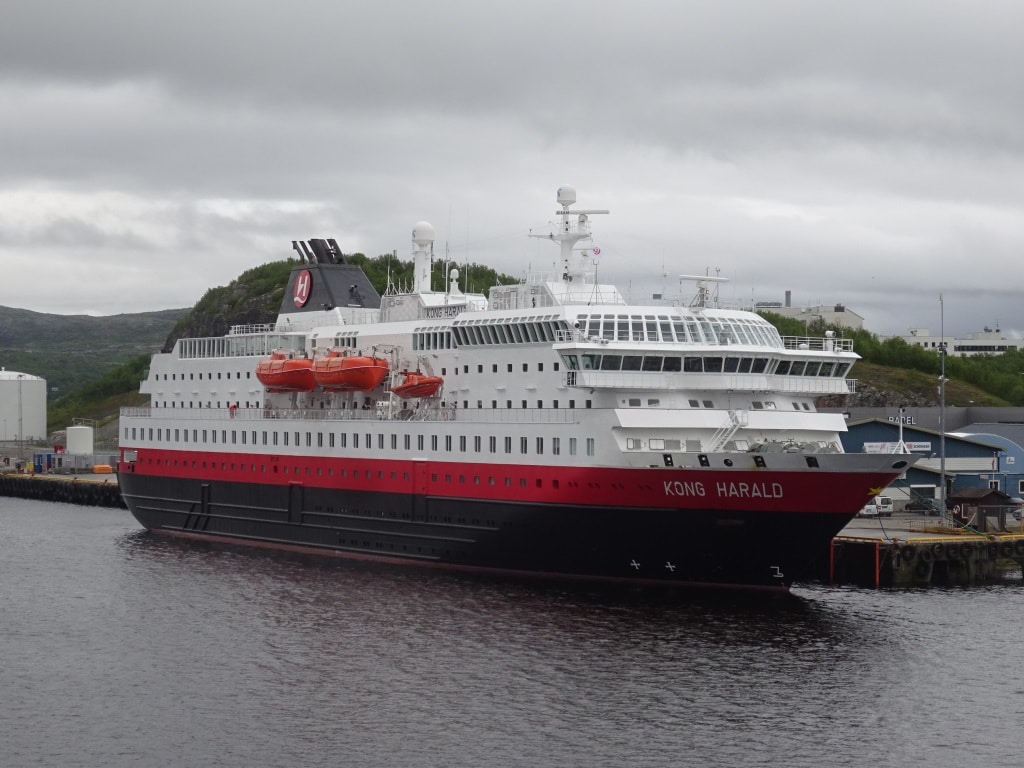 One of the local ferries belonging to the Hurtigruten system. As a lot of people now take the ferry service as a cruise, they start to resemble more and more a cruise ship. But even in the current days of airports everywhere, they still form a life line for the isolated communities.

One of the local ferries came in this morning, the Kong Harald, named after the King of Norway and if you look at the size, you can see it is compact so it fits in all these little ports. The Hurtigruten ferry system runs from Bergen up to Kirkenes and back again and makes daily calls. As they can sail most of the inland fjords, their service is very reliable even during bad winter storms. My lord and Master did two cruises on one of these little cruise/ferries as the newer ones double up as cruise ships to see the Northern Lights. If you ever plan to make a cruise with them, three pieces of advice: 1. Bring your own booze with you, (Prices for a G&T are astronomical) 2. Book a cabin away from the gangway as these ships are on a time schedule as regular ferries and also dock in the middle of the night sometimes just for a few hours. 3. Take lots of warm clothing and more than you think that you will need. (You need to layer yourself as it gets really cold here in the winter)

Tomorrow we are in the port of Hammerfest which seems to be even smaller than Kirkenes. I say seems to be as I have never been there. Weather: Overcast with a fair chance of showers. Temperatures a balmy 08oC or 47oF with a gentle breeze.