Once we were through Lofoten the plan was to go outside again and to sail past the North Cape. But the swell was still running high and that provided a few challenges. If we went to the North Cape then we would have to slow down to avoid the heavy pitching of the bow on the waves and that would result in at least being an hour late in Honningsvag. And that would have a knock on effect on the tours and everything else. So a decision had to be made. Pilots were available and we could go back inside and………….. arrive in time; but we had to forget the North Cape. And then we saw that the tops of the lower mountains were already covered in low hanging clouds and that meant you could not see the North Cape anyway. Thus we went inside; which is very nice and scenic and we docked nicely on time.  If the clouds lift, then we will try the North Cape this evening after departure as the sun does not set anyway. (We passed the 66oN two days ago and so we are in the land of the midnight sun) 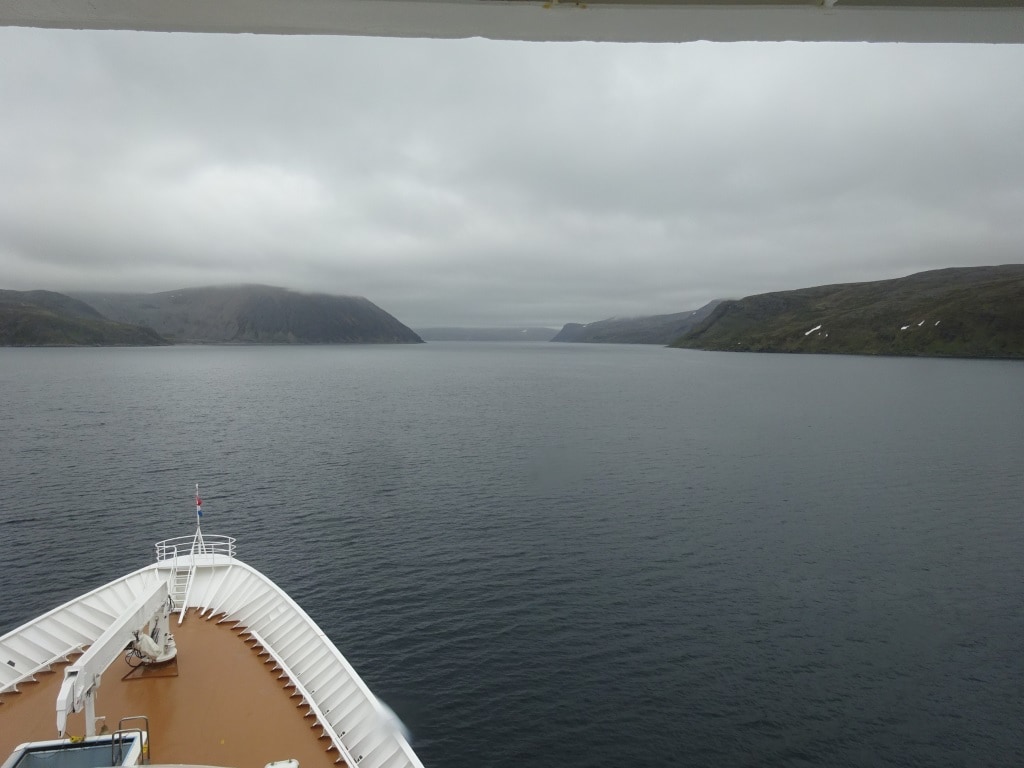 The Norwegian Inside passage near Honningsvag. It has some similarities with the Alaskan Inside Passage but the vegetation is different. Less trees and much more grass.

Of course we are not the only ship on the coast, although thus far we have been alone except in Geiranger. Now we were in port with the Costa Pacifica which with 3800 guests is one of the bigger ones. Honningsvag had in 2017 a population of 2484 inhabitants so this ship alone sends more guests ashore than there are locals. Plus our 750 guests on top of that. So a busy day in downtown. Who says that cruising is not popular that so many cruise guests go all the way to the top? The town is quite compact nearly all the locals live in an area of 1 square mile, so guests do not have far to go unless they go on tour. When all the tourists are gone Honnigsvag is a fisherman’s town, as so many other Norwegian ports. We docked at the best pier in town, but also right in the location where a lot of the fish is brought ashore. And the moment you stepped outside, you could smell that things were fishy. Luckily the smell was not strong enough to be able to permeate into the air conditioning. The town holds the distinction of being the most northerly fishing village of Norway. 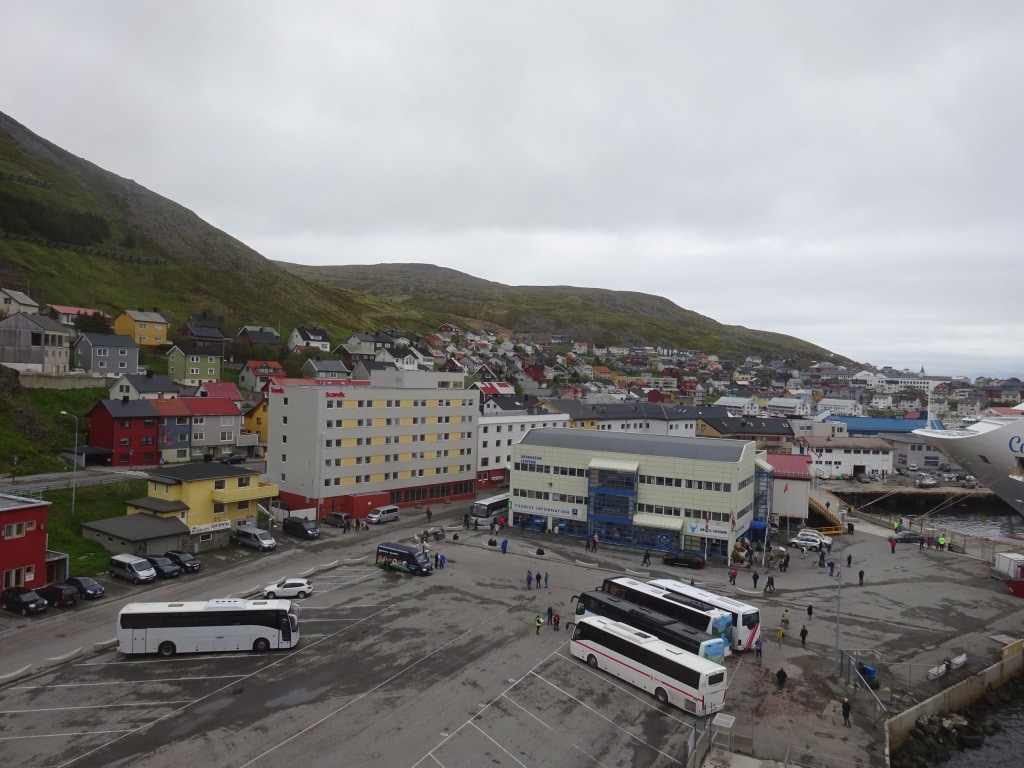 The metropolis of Honningsvag, which doubled in size today due to the influx of cruise ship guests.

What can you do around here? Most popular are the tours up to the North Cape, where there is a large visitor’s center and from there you can walk to the edge and look to the North Pole or look down into the water. The North Cape is not the most northerly point of Norway, that is the cliff next door but it is a steep cliff of 1007 ft. high (Not 1008 ft. so somebody must have measured it very carefully) and from there you look down upon the water of the Barentsz Sea or any ship which has stopped there to look up while you are looking down. The Barentsz Sea is a body of water between the Norwegian Sea and the Arctic Ocean. I am proud to say that the sea has been named after Willem Barentszoon  a 16th. Century Dutch explorer who was trying to find the Northerly Passage around the world. That he did not manage and he had to spend the cold arctic winter on the island of Nova Zembla, near Spitsbergen by building a log cabin with wood from his ship. It was not until very much later that the North West Passage was completed navigated and nowadays in the summer time, regular traffic is possible and even cruise ships now make the journey. Icebreakers are more powerful but also the current Global Warming makes the ice cap melt & diminish and leave open waters in the summer time. 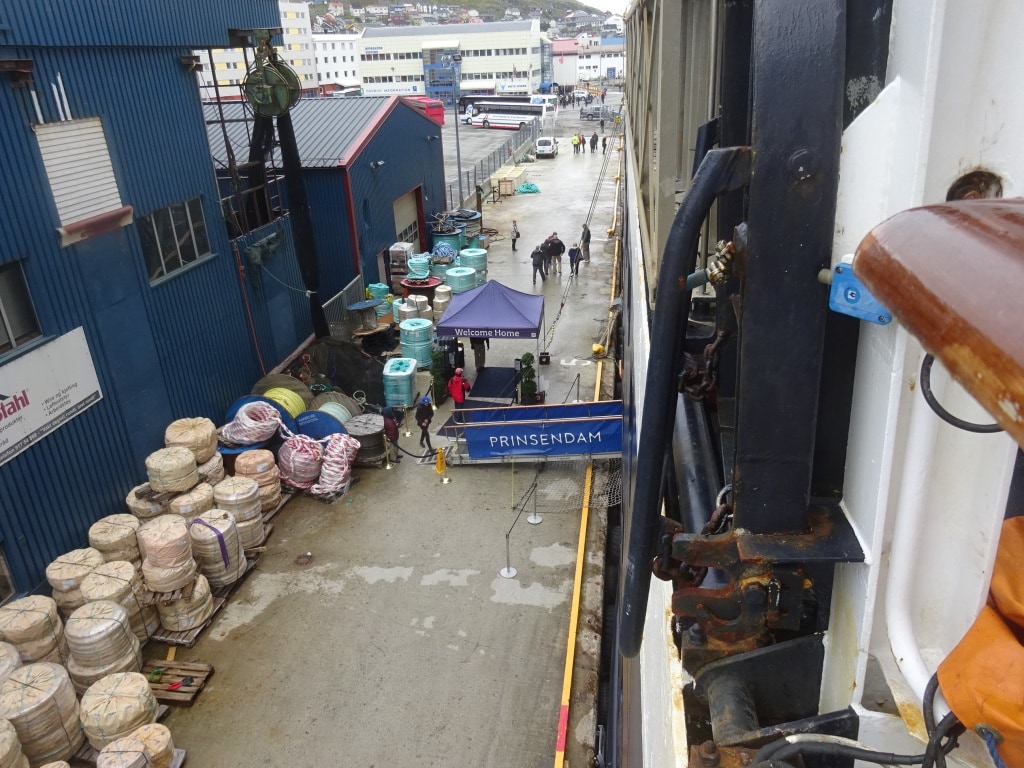 Luckily the locals do not take cruise business that seriously and have built a pier somewhere far out in the wilderness. So we just push our gangway right in the storage area for a local rope factory.

We will sail from Honningsvag at 20.00 hrs. and then try to make for the North Cape which is just around the corner. Hopefully the clouds will have lifted so we can see the top. That is another Captains dilemma. You want to go close to the Cape so you can have a good look at it but due to its height you can then not see the top. If you stay further out, you can see the top with the monument, but you cannot get a good view of the cliff itself unless you have powerful binoculars.

Tomorrow we are in Kirkenes and the original plan was for the ship to anchor. But the local authorities counted their docks one more time and there is room for us so we go alongside. Today it was dry, at least after arrival, but chilly and tomorrow it looks the same. 51oF / 11oC overcast with a light breeze.