Civitavecchia is a major cruise port for everybody who wants the visit Rome while on a cruise ship. But it is also a turn around port for cruises due to the availability of Rome airport. And then of course there are a lot of ferries going in and out; calling at ports along the coast and the various islands, the same as what happened yesterday in Naples. That makes for a busy port. We were today in port with 2 other cruise ships, the Costa Diadema and the Celebrity Reflection. We were at the Breakwater side which can take two big ships or three medium sized ones, while the Reflection was at the Container Terminal, which is not easy for the crew to get in and out so we were well off today.

Civitavecchia is since the 15th century the major port for Rome and important enough to have a large fortress built here a 100 years later by Michelangelo. This time no statues or other art but high walls, tricky corners to make defending easy and with nasty defense moats. The moat is gone and replaced by a road and a roundabout. Before Civitavecchia, the main port of Rome was Ostia, now known as Ostia Antica and now more in use as a seaside resort. Apart from the fall of Rome, the port and river also silted up and thus the ships had problems getting in and out. The only setback is that Civitavecchia is about an hour’s drive from the airport. The roads / motorway are very good but the drive is a bit boring as the land in this area is mostly flat. 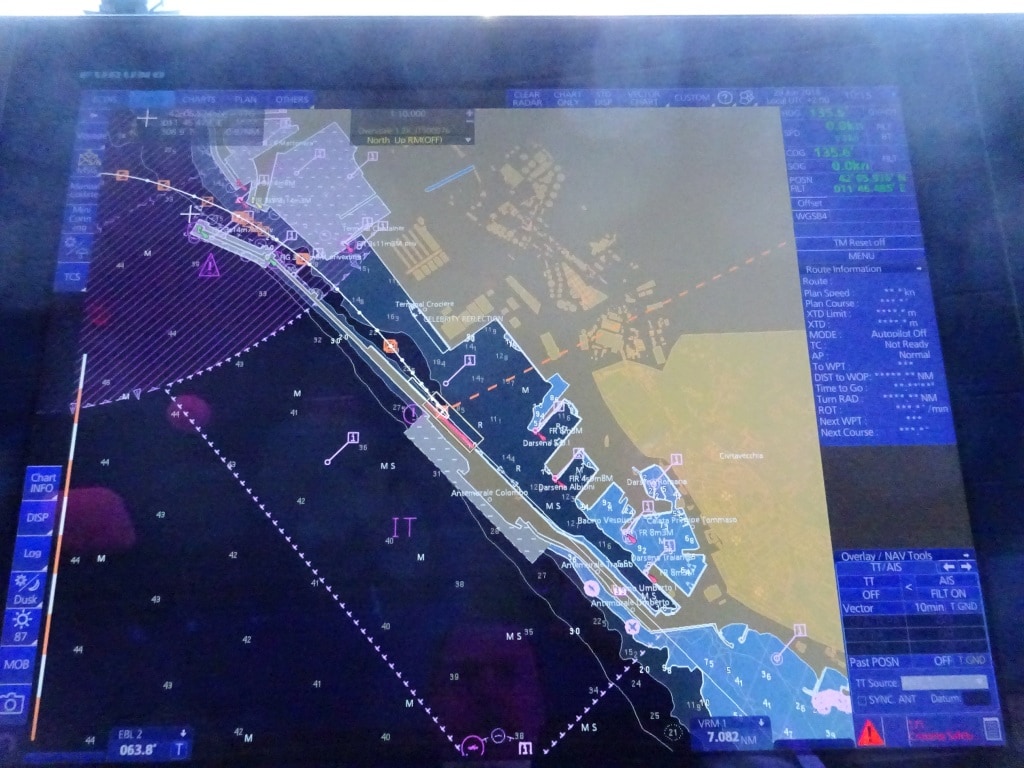 The port of Civitavecchia. As you can see straight line in and out. although it can be a very nasty place when the wind is blowing.

For a navigator, sailing into the port, is quite an experience. And that is not the sailing in itself. That is just bending around the corner and braking on time. No it is the pilots. Together with the Messina Pilots they are the most hurried pilots I have ever seen. Very skillful but also very hasty. They hop on board at the last possible minute, run through the bridge, say a quick hello and then start doing their job. They have all been Ferry pilots it seems as they want to charge into the port as fast as possible and then put the brakes on only at the last minute. Not unsafe but we are normally not that much in a hurry. So part of the captains job is to calm the pilot down and take it a bit gentler. Once the ship is alongside, they normally want to leave sea-side so they can drop straight into the pilot boat and race off to their next job. Only once in my career I managed to get one of them to say yes to having breakfast on board after arrival; and then only if he could have his wife come and join him as he was going off shift. He indeed called his wife and she was in a hurry as well; I have never seen anybody driving a Fiat 500 so fast over the dock as she did.  (The pope drove one of those little bubbles, when he visited the USA a few years ago and it looked like shopping trolley when he followed Obama who was sitting in The Beast) 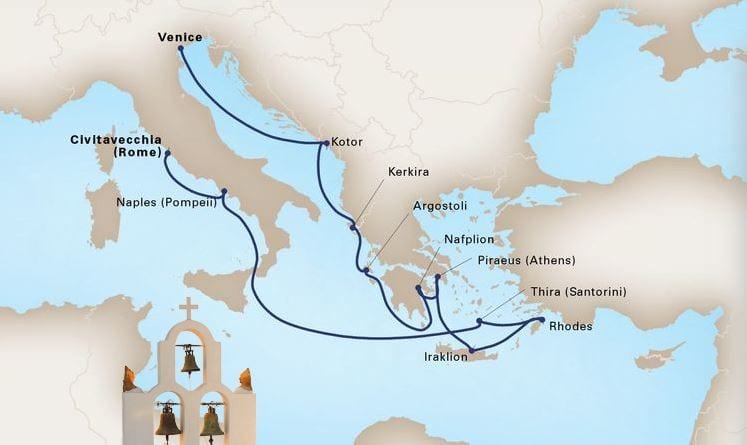 Today we said goodbye to about 90% of our guests and by 11.30 the new guests were arriving. And they are going on a 12 day cruise around Italy as we will end up in Venice eventually. But we will also call at the Greek Islands, Dubrovnik and Kotor. If everything goes well e.g. according to the port scheduling, we will have the luxury of docking in Kotor which is not that usual for larger ships. So we will see and hope. Dubrovnik is also going to be of interest as the authorities are in the process of reducing the crowds. Thus far, not yet with blocking ships or overland buses from coming in but by asking the tour company’s and cruise companies to stagger their arrivals. There are days of 7 cruise ships and at a certain moment of the day all of those on board are in that one square which makes up the center of the old town. That is not good for anybody, let alone those who live there, and thus the authorities trying to deal with it,……….. but with a gentle touch.

This evening, we will retrace our steps and go back to Naples. We will be sailing at least an hour late due to late arriving guests but for that we have leeway in the schedule. It will only make the chief engineer unhappy as he has to crank up his beloved engines a bit more. I think I have never in my whole career left Rome / Civitavecchia on time. Not during a regular call (coaches stuck in rush hour traffic in Rome and on the motorway and neither during a change over day, guests coming late from the airport and still stuck in traffic.)

Weather for Naples: Another warm day 85oF / 29oC and no clouds or wind expected.