Today I boarded the Zaandam in Vancouver which was parked at Canada Place on the West Side at Berth 5. There was one other cruise ship in, the Infinity from Celebrity cruises which is a good deal bigger so she was docked at Berth 1 and 2 on the East Side. Berth 1and 2 are in line, which makes it possible to dock 2 smaller ships there or one big one. The West berth is angled between 4 and 5 and that means that an R class of Holland America is about the biggest cruise ship that can dock there. With the average size cruise ships of nowadays it means that you can have a maximum of three cruise ships alongside Canada Place, if one is a biggie. If there are more in port, then those ships go to Ballantyne a bit further up the river. Because there are during the height of the season always more cruise ships in port, Princess cruises has made Ballantyne its regular dock. The last time I docked there was before Canada Place was opened in 1986 and it was not a bad place if you want to go to China Town. Canada Place is right on top of regular down town and that makes China Town a long walk. Why do I mention this because Chinatown is a big focus point for our Asian crew.  Although they can get everything they like on board, everybody has their own taste in noodles and other snacks; and full boxes are being brought on board. The company allows this with the stipulation that all those snacks will be consumed in the crew mess room and not in the cabin. 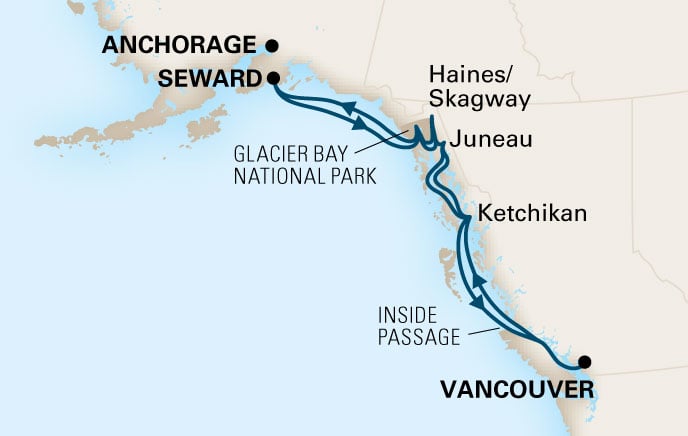 The Zaandam is making a seven day cruise up to Seward and then seven days down again. You can combine this and make it a 14 day complete round trip which some guests indeed do. Most though have a seven day trip and then either go home or disappear into the interior. If you go for the latter option then there are multiple choices and I believe the longest one offered is over 30 days and goes up as far as the Arctic Coast on the North side of Alaska. Then there is the option to leave or join at Skagway which is yet part of another overland tour. More about that once we get to Skagway.

The Zaandam was parked nose out and that is not completely normal.The manoeuvre  which is the easiest is to go nose in so you can see the ship “diving” in the narrow part of the dock, as across from Berth 5 is a building with restaurants and bars and it does not leave much room. Then on departure you simply go astern and once clear of the dock you have all the space in the world to swing around.  It makes arrival shorter and departure longer. Docking nose out results in arrival taking longer but departure is a very short affair: Let go ropes and race away.

Today the ship was docked nose out for two reasons; first it is the only way to get two gangways into the ship, due to the line up of the shore side facilities. We like two gangways as we can get the guests who go directly to the USA off the ship without having to go through Canadian Immigration.  The ship has come directly from Alaska and is still USA cleared. By sealing off a part of the terminal, the pathway is considered to be “CBP approved” and the guests go directly in a Coach which remains closed until it has passed the USA border. It saves everybody, including the CBP itself, a lot of hassle.

Second reason is that the departure only takes 5 minutes instead of 20 minutes. And today the Zaandam was in a hurry. Captain P.J. van Maurik had decided to go for the early tide at Seymour Narrows and with a slack tide around 22.00 hrs. it means you have to be at the entrance of Discovery Pass around 21.15 hrs. and this leaves just under 5 hours to cover 98 miles. Thus “pedal to the metal” all the way. If you can then shave 20 minutes  off your departure time/ manoeuvre, it makes a big difference in the speed to maintain.

Based on that planning the Zaandam took off as a “Jack –out-of-the- box” just before 17.00 hrs. and cranked up to full speed as soon as she cleared the Lions Gate Bridge.  If we clear the Narrows on time, it means we have a lot of spare time to get to Ketchikan and my colleague has already promised he will go sightseeing.

Weather for tomorrow: Partly cloudy with temperatures in the low sixties. As it has been extremely nice weather in the last few days (read much too warm for the Inside Passage) we can expect a bit of Very Low Hanging Clouds during the night and the Navigator will be happy to announce this by sounding the ships whistle. I have a cabin on the lowest guest deck so it will not bother be. I just have to hope I do not have an aspiring Opera Star next door who feels the need to exercise in the Bathroom.