With full speed the ship made it nicely on time to the Seymour Narrows and just past 10 pm. she went through. I was not on the bridge but I could feel it in the cabin; but only if you are attuned to it. Even with slack tide in the Narrows, it is not really slack tide. There are always eddies and side currents which are caused by the flood stopping and the Ebb starting. Slack tide is just the moment where one flow is losing it from the other. So when the ship goes through, changing course from approx. 325o to 287o and then to 006o, the eddies around the ship will nudge it one way or the other and will try to push the ship off course. The Quartermaster behind the wheel reacts instantly to such an off course movement and as there is no room for error here, the “bringing-back-to-course” is much more abrupt than normal.  It causes a different movement than one is used to and that is what you feel.

Going through the Seymour Narrows on the early tide means that you have a lot of spare speed in hand for the remainder of the schedule. Ketchikan pilot is always around 04.00 – 04.30 Alaskan Time and as that does not change whatever tide you have to take, it means time and speed in hand. Holland America expects their captains to try and bring as much enjoyment to a cruise as possible and if that can be achieved with some extra, but safe sightseeing then that is what normally happens.

What we do and what can be done depends on a lot of factors. First of all, how much time do we have in hand? Secondly can we go safely where we want to go (if a scenic area is full of fishermen casting nets in the fairway then you do not go there). Thirdly what is the weather going to be like? Fourthly does it not conflict with the on board program and if that all is ok, then there is the next step: consult the pilots. The pilots are apart from the local experts, also representatives of the state and that means that their take on a situation is vital. If there are no issues, then they will be the first to say yes as they are also there to support the Cruise Industry but if they see issues then the captain will listen carefully and decide accordingly.

There are various scenic routes one can take that goes off the beaten track which we normally have to follow if we are on a tight schedule. But this time we were so early that the Captain decided to go through Grenville Channel.  With a regular speed of 10 knots to make Ketchikan on time, it meant that we would be right in the middle around 5 pm. Perfect for cocktail time and Guests who were going to Early dinner could still see it first from the outside decks and catch the rest from the windows in the Dining room. 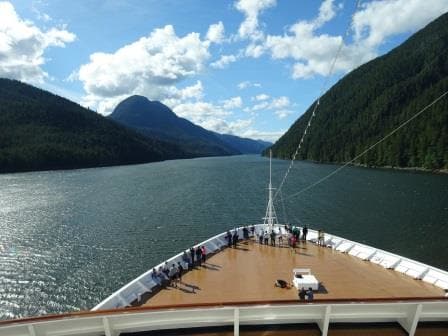 It was a nice sunny day today and by the time we were inside Grenville, the sun was just setting behind the mountains and casting a golden glow over the mountain tops. Very nice indeed. We were not the only one, as ahead of us a Bulk carrier went the same way. Normally we race past such ships but as we were really “cruising” today at our leisure we followed her at about 2 miles distance. We even saw a few whales lazily swimming by and disappearing with a flip of the tail, once they heard our engines. We also saw Red Tide and although it is dangerous for humans, it does not seem to affect the whales as they ploughed right through it. 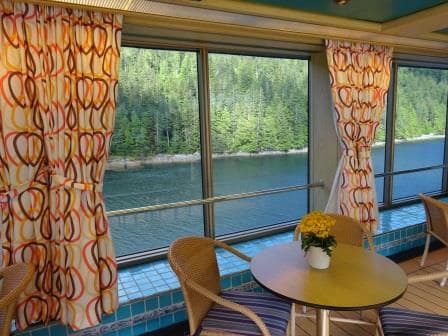 The shore is never far away in Grenville.

My regular work has started to today, first with enlightening the officers on board in how to conduct a safe Medical Evacuation by Helicopter and then I started my walkabouts in the ship.  Each HAL ship has several audits a year: From HAL itself, from Carnival Corp, from Lloyds, from USCG, from Flag State etc. etc. and the ships want to pass in the best way possible. We now have to comply with so many new rules that there is always the danger that some small thing is overlooked. A matter of not seeing the trees for the forest any more.

So if I can cast a fresh eye on the ships proceedings then that will help greatly. So in the coming 14 days, I will walk the ship, deck by deck, locker by locker and staircase by staircase to see if all is in good shape.

Tomorrow we are in Ketchikan. Rainy Capital of the World. It is supposed to be dry; and Ketchikan dry IS dry even if there is an occasional drizzle.  Drizzle does NOT qualify as rain in Ketchikan.  Temperatures are supposed to be in the low to mid-sixties and that is good as it keeps those Very Low Hanging Clouds away.