Normally I do not like airport hotels very much, I prefer to be somewhere in downtown, but due to my delayed flight last night it was convenient. I could just walk through the terminal and straight into the Hotel. Today is a layover day before I join the Zaandam tomorrow.

Yesterday I mentioned that exciting things were coming to Holland America and the first one is being worked on right at this moment.  We are getting a new Head office.  With the creation of the HAL group there were a lot of rumors flying around: Will we merge with Princess and move to Santa Clarita, will Princess merge with us and move to Seattle? Then there was a vague plan to have a new office closer to the airport, which for many who work in the office would have been easier as it would have avoided the horrible rush hour traffic into the center of the city. None of it happened as suddenly we were advised that the company had bought the whole block right behind our current building. 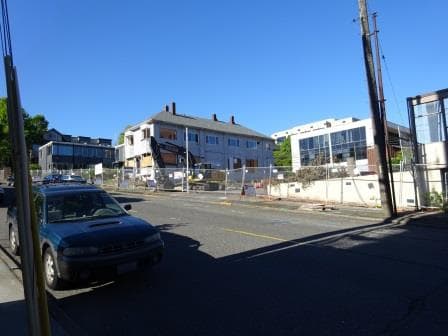 Old buildings are being removed before construction can start. This was the situation on June 5; 2015

The current building 300 Elliott Avenue west is not owned by HAL but we lease several floors. 1, 2 and 4. The 3rd floor is taken up by several medical company’s including one which makes (or sells) wheelchairs and other gadgets. Some of their products we see every day on our ships.  But if you lease a building you are stuck with what the lessor allows in the building as far as layout and operation is concerned. If you build from scratch then you can do whatever you want to do with the lay out and that should result in the company philosophy being embedded in that building. 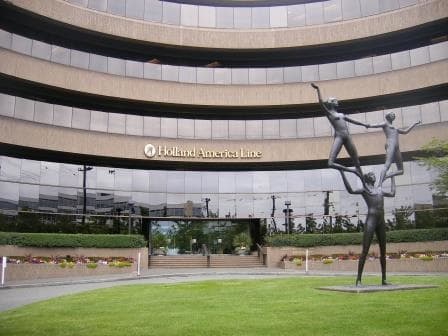 So I am really looking forward to what the final result will be. I am not an office person and only visit once or twice a year but for those who spend their lives there it is important stuff. Promotion goes from a cubicle to an inner office, then to an outer office and after that the size of the window and/or the view becomes more and more important it seems. As far as the view is concerned the move will be a downgrade. Currently many offices have a magnificent view over Pudget Sound and see the ships coming in and going out and also the ferries going to the other side. Unfortunately you cannot see the HAL ships coming in as they dock north of the office but you can see the competition, Celebrity and NCL whose ships dock down town. I still have not figured out which dock is the best one, but for taxi’s and coaches the Holland America dock is certainly superior. Lots of parking for loading and unloading. For the crew it is a bit more difficult as you cannot run off the ship for a quick hour ashore.

If all goes well, the new office should be ready near the end of 2016 and then HAL will move from the current office where we have been since 1983; when HAL and Westours started their cooperation and later on merger.  Before that we had offices in Rotterdam, New York and Stanford but in 1983 it was all consolidated in Seattle. Now we go to a new office, the first new build since Holland America built according to its own design at the WilhelminaKade back in 1900.

How it is going to look is still top secret as it is still under development, but it suits me as it remains close to the hotel which I normally use while visiting Seattle. One block away, remains one block away. A longer distance is not a problem during nice weather but it tends to rain quite a bit in Seattle and that rain often comes with wind gusts and then an umbrella does not work very well.

Tomorrow morning at 06.30 the shuttle bus of the local courier will be collecting me and whoever else is going to the Zaandam and then real life will start again.