Sunday I will start my seafaring exploits again and currently I am on the way to get there coming from Miami. Vancouver Sunday boarding of the ms Zaandam.  However thus far my endeavours to get there are being stalled by Delta airlines losing a crew somewhere near Phoenix. Causing a delay from 19.55 to 23.03 in Seattle Airport.  So I found myself a quiet corner with an electric socket to bring you up-to-date about 14 days in Miami for the 2015 Senior Management Conference.  They are trying to do their best to make us happy with free soft drinks, nibbles and a pizza party. The pizzas are going down very well for some reason with the Asian group, while the Caucasians seem to be more focused on chips and chocolate bars. If you enjoy observing people an airport is a great place to be as you see the most unusual things.   Including the amazing sight of seeing a very tiny Pearl of the East devouring half of an 18 inch pepperoni pizza.

Why was I in Miami as our ships do not sail from there? For those who are not well versed in Holland America Line or not familiar with my old blogs; HAL gathers it’s senior officers about every 18 months for 3 days of meetings somewhere in the world.  Most of these meetings have held been somewhere in the USA but in 2013 we all descended upon the ss Rotterdam in Rotterdam, the Netherlands. This time the venue was once again Miami. A number of years ago we had been here as well, as it coincided with the Miami Cruise Trade Fair. The only thing I remember from that one was that Mickey Arison invited us all to attend a game of the Miami Heat, the Basketball Team he owns and which has been rather successful in the last few years. I remember it as I had never seen an American Basketball game being played live.  In Europe they show some of the games but never the hoopla which surrounds it. I do not remember the game but I do remember the hoopla / circus that was being built around it.

So now we were back in Miami but no Mickey Arison in sight so we spend 3.5 days in conference without any games.  I came a day early as I had to refresh my Crisis Management and Human Behavior Certification. This is a one day refresher to dust off our knowledge of how deal with crowds during emergencies.  This training is conducted by a true legend in the industry, Dr. Beau Altman, and every time you fly you see his handy work. He is the inventor of the emergency card in the front pocket of your seat. It was his idea to omit all written information and solely use pictograms which have the advantage that they are universal. The whole airline industry has adopted this standard making it a lot easier when travelling.  So we were reminded of the dos and dont’s  during an intense 8  hour session.

Then there was the conference itself. We will always enjoy seeing old friends and colleagues again as with a fleet of 15 ships, years can go by without seeing or working with each other. At the same time we hope that HAL management will have something engaging to tell.  They enable this by each day being split up in two parts; a plenary session with all the troops together in the morning and then in the afternoon there are breakout sessions only with the respective ranks. In the latter ones we then discuss issues pertaining to our specific functions and areas of responsibility. 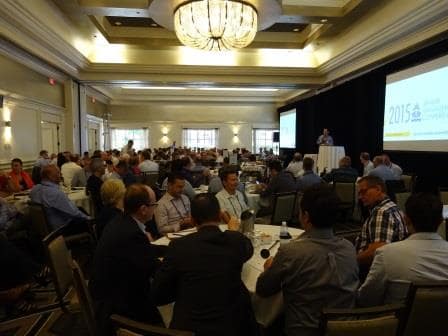 The full group in the morning session. approx. 180 people, from the ships, from the office and from suppliers to the company

This time the conference was interesting and exciting as we are in a period of change. Holland America is now part of the HAL group within Carnival Corp.  This group consists out of Holland America, Princess, Seabourn and P&O Australia. Although the individual brands remain independent as far as their on-board product is concerned, behind the scenes we are working more closely together than ever. Navigation and Safety is the same for each ship which maintains a high standard and as a group is always stronger than the individual, cooperation is a good thing.  Our big boss Stein Kruse has now become our Very Big Boss by heading this HAL group and his old HAL function has been taken over by Orlando Ashford as the new HAL President. He is not from a shipping background but from the HR & Consulting side (He worked for Coca Cola for years) but as he was stationed a lot in Europe he really understands what make us tick, so he is a great addition to HAL as far as we are concerned.  He closed out the first session and opened the 2nd session with a performance which would have made David Letterman a very happy camper, if he had him on his show.

With the closer cooperation we have some new players in place such as Keith Taylor who is now our Executive Vice President Fleet Operations and George Wright Vice President Marine Operations. Then there is Michael Smith Sr. VP Hotel (although the Hotel part has a different name now) and a new Lady who heads Human Resources as Sr. VP called Elena Siegel who started out at Princess.  Altogether this new team is singing a different song than before and I think there will be some exciting things coming forward in the near future. Both for the guests as for the crew.