As mentioned yesterday we were going to dock at the Railroad dock, this is the largest dock in the port and can handle two 1000 ft. ships. For a ship’s captain it is also the best dock as it is sheltered from the Lynn Canal wind.  This wind is a local phenomenon that regularly occurs in the afternoon. The ship will arrive during wind still weather in the morning but by 3 pm in the afternoon it is blowing 30 to 40 knots from the south. It is a funnel wind caused by the warming up of the land to the south and then enhanced by the fact that most of Lynn Canal is straight and has fairly high mountains on either side.

As the wind is not there on arrival, every dock is an easy gig to dock at. There are four larger docks in total: Rail Dock Forward, Rail Road Dock Aft, the Broadway Dock and the Ore dock. The latter was built for Ore transport from the interior but it takes some time to get sufficient ore from the interior to load a ship, so we only see a Bulk carrier here once in a while.  Then there is a small dock that is used by the Alaska State Ferry or the very small cruise ships.

Thus captains have no issue with the docks on arrival. But when it comes to departure it is a different story. The wind is then very strongly blowing (the most I have experienced was 75 knots of sustained wind) and when you are then docked at Broadway or at the Ore Dock it can be a real challenge to get out. That is caused by the fact that the wind hits the port under an angle. If the wind would blow straight on the stern then it would not matter but it hits the ship (and the funnel) about 30 degrees on the side. That means that the ship will be pushed straight back alongside if it is along the Ore dock or is being blown away if docked at the Broadway dock.  In principle the Broadway dock is my favorite as it has the shortest walking distance to town (to Broadway, hence the name of the dock) but I also like to leave on time, so when I can park my ship at the Rail Road Dock, there I go.  And every other cruise ship captain will do the same.

Normally the Rail Road dock is occupied by the Big Boys, those who would have a hard time docking at Broadway. So when the ships are on a Saturday/Sunday cruise cycle, the whole parade heads for Skagway on Wednesday or Thursday and then the biggest ones go to the Rail Road dock. Holland America operates medium sized ships, so we go to Broadway. Great for the guests but a headache for the captain who needs to sail on time.

When this funnel wind is blowing, leaving from the Rail Road Dock is not an issue. When undocking you are still in the lee of the mountains and by the time that the wind is catching the ship, the ship has enough speed to make it to the middle of Skagway harbor  where it can drift all over the place without the danger of hitting anything. 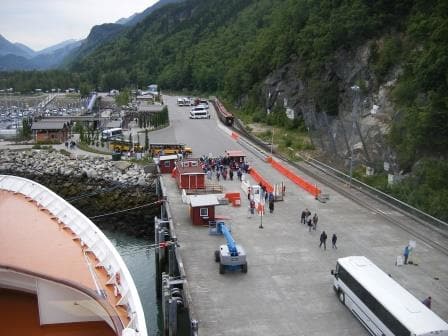 Skagway Rail road dock fwd. In the distance the train that takes the guests on the Trail of 98

The Volendam is a Wednesday ship and thus there is no pecking order. So it could happily dock in the lee of the mountains, even leaving room for the Seven Seas Navigator to go behind on the aft section. The wind did pick up during the day and by looking at the waves near the Broadway docks I estimated a wind force 7 and that is not as bad as it can be. For the guests this is all of no concern. Those who left us today, hopped on the Bus, those who joined us hopped off the Bus, and everybody enjoyed a sunny day.

Sailors are superstitious. We live too close to nature to believe that not everything has a rational explanation. Thus we have mascots. In the archives of my blog you can find somewhere the mascots of the Veendam and the Statendam, but also the Volendam has a collection.

Now the logic is that a mascot only works if it is given by coincidence as a genuine gift, without any second thoughts.  Then the puppet or whatever it is will be placed on the Bridge.  So a guest pushing to give a charm to the bridge with the intent to have THEIR charm there, results in an opposite effect. So the mascots arrive on the bridge by coincidence, by sheer luck, by the spur of the moment. 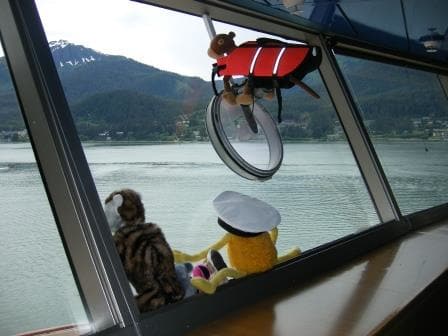 That does not mean that the sailors cannot have a bit of fun with it, and therefore the Chief Mascot on the bridge (there are 6 in total) is wearing a (doggy) lifejacket to ensure that he is prepared for any eventuality.

Tomorrow we are in Glacier Bay. Marjorie Glacier is very active at the moment, so hopefully we will have a great show of “White thunder” crashing down.