The trouble with Glacier Bay is that you never know what the weather will be like. It can be totally different at the entrance of the bay compared to what happens in the Upper Bay where the glaciers are. This is all courtesy of the extended ice cap that feeds the glaciers that we have come to see. The only certain thing is that it will be chilly. The Glaciers lower the regular air temperature to about 5 or 6o, and the water is near freezing. Normally around 4oC and that is of course due to the melting/calving glaciers but it is not less than that because the water is sea water. Glacier Bay has a direct connection with the North Pacific Ocean and is tidal.

Glacier Bay National Park. Near the green square/visitors area in the chart is the narrow area (shallow under water)  in the lower bay with high currents

It is very tidal and that keeps the sea water temperature near the Glacier fairly steady. Regardless of how many ice cubes the glacier throws in. This morning the tide was really showing off, because when we arrived at the Ranger station at Barlett Cove there was almost 5 knots of current running. Caused by seawater being pushed into a smaller/shallower bay when going in, or when it is ebbing, let out again from this bay back to the North Pacific Ocean.

I did not see that many whales this morning, but they were there, as the Rangers had already declared “whale waters”. That is a phrase that is being used to indicate that there is a high concentration of whales in the Lower Bay entrance. Due to the strong currents here it is a good feeding area and thus whales will concentrate in higher numbers on this relatively small area of the Inside Passage. While they are having a continuous breakfast, lunch and dinner, they do not pay any attention to these steel tin cans full of people. Why should they? They were already swimming around the area, while we were still trying to invent fire. That means that for the narrow area of the lower bay a maximum speed is set of 13 knots. Scientists have figured out that such speed is slow enough to alert the whales of the approach of a mechanical vessel. Enough time to swim away or to dive. The crew on the bridge goes through a special training to deal with this issue.

When in waters where there is no speed maximum, but whales are expected, extra good lookout is being kept and if a whale comes too close, the ship slows down to that speed. If you see a whale from far away, you can also change course as a whale normally keeps swimming in the same direction. Normally………..but not always. So slowing down is a very good solution to deal with this issue. There are other areas in the world where these speed restrictions exist as well. A well-known is example is Boston. There is an area which forms the habitat of the Right Whale. To say it bluntly they seem a lot less clever than their nephews the Humpback whale, as they do not notice very much at all. As result they are almost extinct. So as a passing ship you have to be very careful and if there is a sighting, it is being passed on to the USCG who will then inform the ships that will be coming to the area later.

In Upper Glacier Bay we do not see that many whales. There might be one on occasion but the food is less abundant so they tend not to go there. Whether they know that by experience, or whether they tell each other (Those whale songs must mean something) I do not know, but as soon as the ship has left the lower bay it can speed up again, to whatever speed is needed to maintain the schedule. For most ships that is about 18 knots, so they can make up some time. Time, which might be lost again when having to slow down for ice when approaching The Glaciers.

In my 30 years of coming to Glacier Bay I only had twice the opportunity to keep up the speed up all the way to the Glacier. Both times were late in the season, when the sea water was a little bit warmer and caused the ice-cubes to melt faster and at the same time the glaciers were not very active. But normally you have to slow down to 10 knots or less, when you get into the ice, to avoid dents in the hull but also to avoid that beng- beng noise that you get if you bump into larger pieces, which are not big enough to damage the hull, but sounds as if it will. You do not want to upset the guests with something like that. The pilots try to get through these iceflows without hitting a single cube and sometimes they feel quite embarrassed if they do not manage to do so. 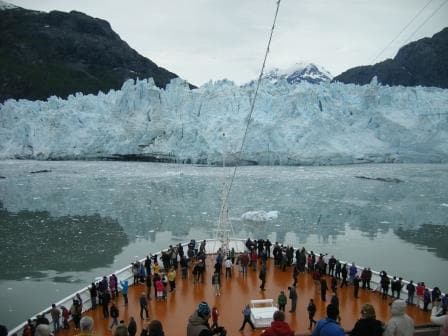 Nose to nose with Marjorie Glacier. It was overcast so perfect weather for photos

Today there was a lot of ice as the Glaciers were very active. There were a few good calving’s and the Glaciers put up a nice show. I did not see too much of it, as I was busy with training the purser and her team to collect all the money from the ship timely, so it can go with the lifeboat. More about that tomorrow.