As was expected yesterday the weather in the Alaskan Inside Passage was glorious. Lots of sun and most of the wind was caused by the ship itself, so not annoying. The temperatures were fairly cool in the morning and that meant clear skies and thus excellent visibility. Summer has just started here and thus there is still a lot of snow on the higher part of the mountains; and the combination of the blue sea, the green slopes, the black mountain faces and the snow topped mountain peaks, produced an awesome sight. People are going to be very lucky this cruise if this weather lasts. The ship picked up the Alaskan pilot at the metropolis of Kake (population 150 souls, as far as I have been told) but as it has a plane connection with the outside world it is good spot for pilots to board and thus it is an official pilot station. That was in the early morning and from that moment it is a good 7 hours sailing to the dock at Juneau.

When coming closer you pass the entrances to Tracy and Endecott Arm which is for some of our ships a scenic stop, a sort of mini Glacier Bay. Not however for the Volendam on this cruise. Inside these fjords or arms as they are called in this case (Seen from the top they look like a bent arm) are glaciers and sometimes the ice bergs are large enough that they make it all the way into the main deep water area. Exciting for the guests, as it was the first piece of ice they could see on this cruise. There will be lots more in two days from now.

One of the reasons it takes a while to get into Juneau, is the fact that the last 5 miles go very slow. This is when entering Gastineau Channel, the entrance Fjord to Juneau harbor. Due to civilization on the sides of the channel, speed restrictions have been imposed to avoid damage to boats or excessive surf along the shore.  When the ship comes charging in at 21 knots, it has to come down to 16 knots for the first 3 miles, then to 10 knots for the next mile, then to 7 knots for the next mile and before entering the harbor itself: the speed has to be down to 5 knots. For the rest there is no restriction and that is also not really needed as every captain or skipper will ensure that his/her ship has stopped before it arrives at the dock. Failures in the past have proven that the alternative results in way too much paperwork.

By 1300hrs. the Volendam was parked at the Cruise Terminal, which is the 2nd berth in the port. The smallest is the Alaska Steam Ship Dock which is long enough for the Statendam Class ships and anything shorter. The Volendam is one size too big for that dock. Although the Volendam is an evolution from the Statendam it is longer (as it has a 3rd = center staircase) and thus it docks at the center dock, which we call the Cruise Terminal. Then there are two more docks further out, at the southern edge of the harbor. 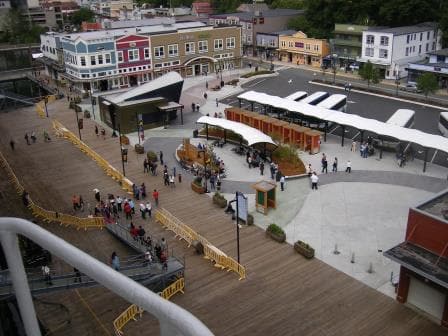 What used to be a lumber, fish and general cargo dock, has long since been transformed into a Tourist – Tour assembly area.

The Alaska Steamship Dock and the Cruise Terminal are supposed to be gone by next year, as the city of Juneau is planning to build a very long floating dock at the same location. That floating dock has the advantage that it will go up and down with the tide (which can reach up to 14 feet or so) and that saves all the hassle of adjusting the mooring ropes and moving the gangway every 3 or 4 hours, when the main access break to the ship disappears or re-appears under or above dock level. The Volendam is a Wednesday ship (= departure from Vancouver on Wednesday) and that is an unusual day. 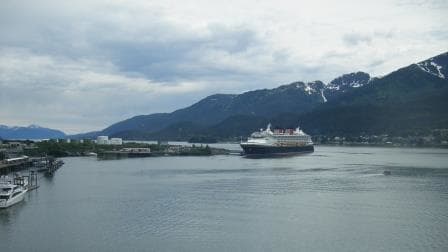 The only other cruise ship in port, docked at the furtherest dock away from downtown.

Most ships leave on Saturday or Sunday and if you are one of those ships, then it is really a convoy sailing to Alaska and the ports are always full. Now when sailing out of synch with the normal world means that there are not that many ships in port, which is of course good for the guests. The only other ship in today was a Mickey Mouse Boat.  A quiet day for Juneau as there were only about 3,500 guests milling around. The crew, if off duty, does not mill around, they take the shuttle to Costco. I honestly believe that the revenue of that retailer must double during the cruise ship season as it is amazing what the crew brings back from there. Tomorrow we will be Skagway. Again because the ship is on this unusual cycle, there will be only one other ship in, the Seven Seas Navigator and that means that both ships will be at the Rail Road Dock. Which is every captain’s favorite location as it is sheltered from the afternoon winds blowing up the Lynn Canal