As soon as we had left the port yesterday we were enveloped in this white cloud again. But in the early morning it came to an end and we were greeted with a gorgeous view of the coast of Greenland. Clear blue skies and hardly any wind outside and thus no wind inside. Seas flat as a mirror. 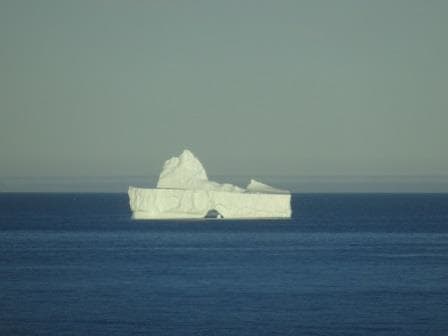 Finally a nice big Iceberg for all to see, marking the Western Approaches.

By 7 am. we approached the Western entrance which was nicely marked by several icebergs which had happily run aground there. Then we sailed in with the gentle speed of about 10 knots which resulted in a schedule of leaving again at the other side around 5 pm.  Our two pilots were in full swing, taking alternative turns in advising the bridge team of what would be the best way of going through. Most of us have been here now several times but pilots are normally crossing this area more often than we do. 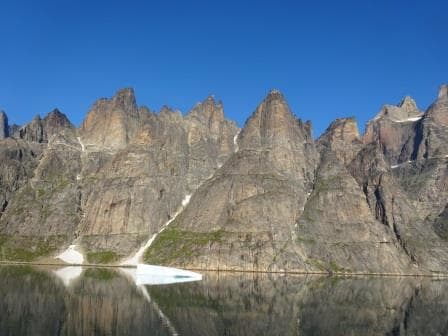 Ragged mountains peaks dominate the Western Entrance. And a sea as flat as a mirror.

On average the water is quite deep but there are a few shallows spots, which are not an issue as long as there is no ice in the deep spots next to it. Then there is one tight and narrow turn where it is easier also not to have an iceberg in the way. Luckily inside the Sund the bergs are normally not that big that it has ever formed a real problem. The real big icebergs are coming down from Upper Greenland area (Disko Bay etc.) and they float down the coast. It has been known to happen that a transit had to be cancelled as a Berg blocked the Western entrance but it is not really common. The Sound or Sund is named after Prince Christian later King of Denmark in the 19th. Century. (I might be a bit off as there one more than one Christian if my memory serves me right and I think was nbr 7 or 8) The Sund has a length of 100 kilometers or about 54 Nautical Miles and that is why we can trundle though at a very sedate speed and even stop at the Glaciers along the way. 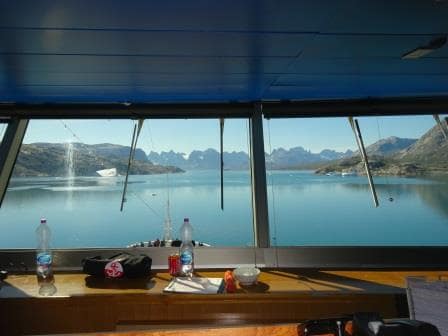 View from the Bridge. Two pilots and thus two bottles of water.

The Sund connects the Labrador Sea with the Irminger Sea which is the body of water between Greenland and Iceland. There is one (lonely) village in the middle of the Sund called Aappilattoq, with 132 inhabitants, and it is lonely because all around it the mountains go up to several 1000 feet. They have a helicopter connection with the outside world but for the rest contact is only by sea.  I remember that in the early days a cruise ship once stopped there to land medication, as the village had been cut off for some reason from the outside world for some time. 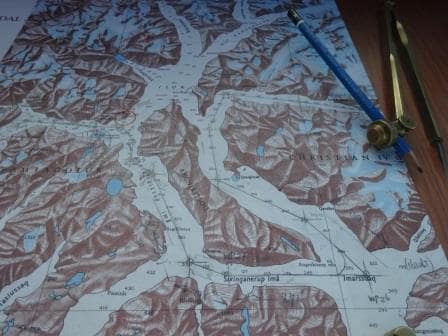 The Navigation chart of the Sund. As you can see we do not follow the straightest route possible but almost double back on ourself. We follow the deep water & glacier route which results in going around a long island.

As mentioned yesterday, this area is not covered yet by the Electronic charts system and thus the navigators went back to the good old days and verified the ships position by bearings plotted on paper.  The area has some semblance to Alaska with Glacier Bay but the fjord is generally tighter (narrowest point is about 1500 feet wide) and it looks different as the rocks are of a different composition. Here we have mainly white granite which gives the mountains an elephant greyish hue while in Glacier bay it is more black or sometimes red (streaks of iron deposits) It is not a National Park and thus no Park Rangers for the commentary. That is done by our own Travel Guide Barbara who has been here many times and has no problem to explain all that comes floating and flying by. 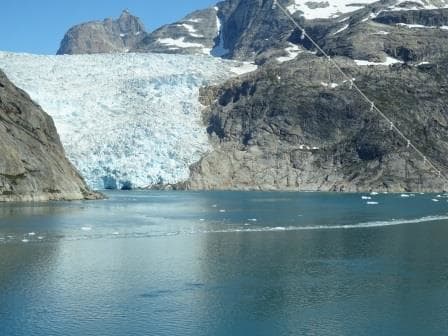 One of the several Tide water glaciers coming down from the Greenland Ice Cap.

The biggest difference between the West side and the East side is the way the mountains are shaped. At the west side they are very ragged and sharp as normal mountains have not been touched by the grinding motion of water or ice. The East side has been and thus the mountains are more rounded and shapely. Greenland is still covered with ice but during the ice ages it must have been very impressive here as even these rounded mountains reach a considerable height. 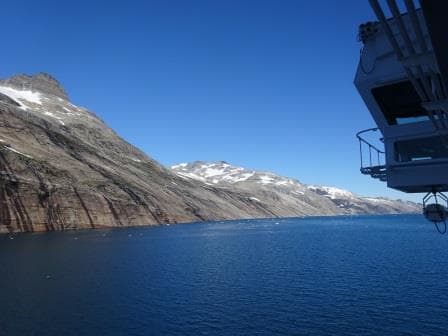 The mountains on the East side are more rounded courtesy of Glaciers polishing the tops down.

This was the best Prince Christian Sund transit I have ever seen and I hope the guests will appreciate it, as it is not always the case. It can rain, there can be no visibility, there can be an un-expected storm, you never know. Or an Iceberg can block the Sund somewhere. Today was really good: 10 points out of 10.

Tomorrow we are at sea, crossing the Irminger Sea on our way to Iceland. There we will stay two days as it takes more than one day to explore this fascinating island.

Weather: We are still close to Greenland so it can be anything. Maybe the captain has to blow the horn again; maybe he will have an un-interrupted nice sleep. We will see. 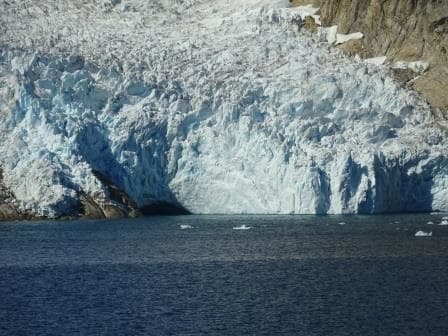 Close up. Every glacier has a river under it which transports the melt water and also helps it to slide down the mountains. This is a big tunnel / river exit.