Approaching Puerto Vallarta is in a way quite easy; you just put the brakes on 3 miles before the beach in the Far eastern part of the Bahia de Banderas: and there is the pilot station, one mile off the beach. The regular committee was waiting to receive us, erratic fishing boats, the navy protection escort and the pilot boat all gathered around the sea buoy. The pilot hopped on board at 06.59 and the ship was docked at 07.40 all fast, at the cruise terminal in accordance to the local wishes.  I was docking nose in as we wanted to exercise the portside lifeboats and that also gave the guests in the crow’s nest an excellent view of the triathlon that was being held in the port today. 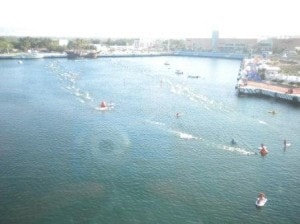 One mad scramble around the buoys.

During the morning it became clear that there were two triathlons being held. One for the professionals and/or real athletes and one for the “good willing but struggling”. The first one started at 08.00 with swimming around the port basin, followed by biking up and down the front street and then running into the back streets. By 10 am the 2nd group went into the water and guessing by the time that they spent there, they were doing only a half triathlon. 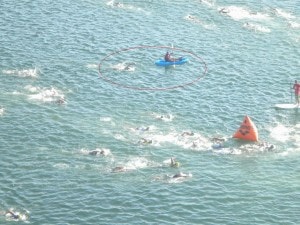 There is always one. Later when some of them were getting tired,there was more than one who looked for a shortcut.

I had never seen the swimming part of a triathlon from a high up vantage point, so 75 feet above it all gave an interesting perspective.  The organizers had laid out a track in the middle of the turning basin and the idea was to swim around the buoys. Much to the relief of our pilot, who was keen to point out where the crocodiles normally gathered and how they liked to attack from below.

But the swimming was in the main basin and so much noise was made, that even a Mexican crocodile would have run away with a headache within 5 minutes. 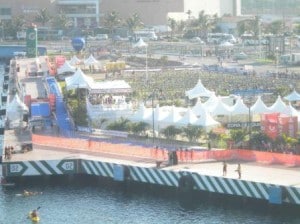 Bikers paradise. It just looks like a Dutch Railway station.

Then I was puzzled by all the canoes and guys standing on surfboards in the centre of the track. this turned out to be marshals making sure that the swimmers stayed on the intended track. We saw several attempts to cut corners and pass the buoys on the wrong side or even completely try to ignore the buoyed route. Having 10 or 12 of these marshals in position was not an unnecessary luxury.  From the swimming it went to biking and the area around cruise pier nbr 2 was given over to the parking of all these bikes.

The bike run took place on the front street of Puerto Vallarta which is ideal for this as it is basically a combination of four streets. Two in the middle for the fast – thru traffic and two on either side for the slow traffic that is going into the town. As it was Sunday, there was not much fast traffic and thus the four middle lanes had been blocked off for the bike race.

We could not see from the ship where the running took place so it must have been off the front street area. By noon time the main part was over and the port basin was cleared of all the buoys, which meant that we could lower our boats and do our exercises.  Nicely in the shade of the ship as during the morning a fresh ocean breeze picked up, which made the day in town quite pleasant and as it blew on the sb side of the ship, the boats were in the shelter of the ship.

That wind helped greatly when leaving as it simply blew us off the dock and the only thing we had to do was regulate the swing into the turning basin. The route will now go directly to San Diego and that means two days at sea. For this last cruise, Cabo San Lucas is not in the schedule as we visited Manzanillo.  I will leave you with one photo from Manzanillo, giving proof that sometimes the life of a ship’s captain is not that bad……….. 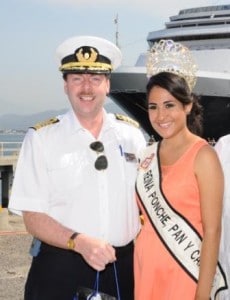 This beats deleting emails, which I normally do around this time.