Around 06.00 we entered the wide entrance to the bay of Manzanillo port. Although blessed with a natural bay it was for a long time a port of only minor importance. That changed in the 90’s. when it was decided that it should become one of the most important import and export ports on the pacific coast. 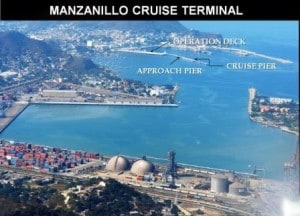 Overview of the port of Manzanillo. The large cargo port basin is in the foreground.

For that purpose a complete new inner port was created in the back of the bay. Reachable via an entrance channel leading to the bay itself. The reason for a separate port with an entrance channel was the fact that there can be a very strong swell running into the bay when the south westerly winds are blowing. That swell runs into the bay, hits the shore and then bounces back into the bay. The two wave patterns then cancel each other out half the time but enhance each other half of the time and that is very unpleasant for the ships alongside. Hence a separate port in the back. With all the cargo traffic arranged in the back port there was room for a cruise terminal on the Manzanillo waterfront. Most cruise ships call during the season when the south westerly winds are not that predominant and thus the planners found it acceptable to put a new pier there. We had very little swell today and thus it did not matter where our dock was.

It did matter that the pilot did not show up as arranged. Although every Tom, Dick and Harry had confirmed our ETA of 07.00 hrs., the pilot was nowhere to be seen. A friendly lady from Port Control told us to wait and that was it. A tanker was coming from the anchorage line up ahead of us and we had nowhere to go. After about 30 minutes it became clear how it worked here. Two ships came out from the inner harbor and the pilots transferred from the outgoing ships to the incoming ships.  As per pilot, you get served, when WE (that’s…. them) are ready. Luckily the dock is only 1 mile from the pilot station, so I was still able to come alongside being only 15 minutes late.  No problem for today but there could be situations that our schedule is tight and then it could affect the tours. 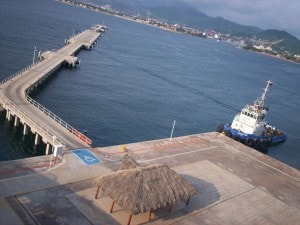 The good thing was that it is a very nice cruise dock. You walk straight into the town and there is plenty space for the tour busses to park on the dock that leads to the cruise pier. The port is trying to drum up some extra business and yours truly was invited for an official presentation. Plaque exchanges, speeches the whole nine  yards.  But as it came with a lot of beautiful Mexican girls thrown in, the suffering was tolerable. So for about 30 minutes I was world famous in the town of Manzanillo. I am waiting to hear some feedback from the guests to see if they enjoyed the visit yesterday. 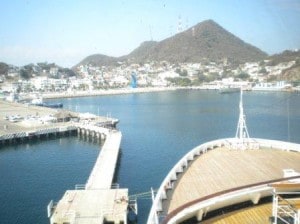 I have only been here once before and then just fleetingly, in 1986, when we stopped here with the ss Rotterdam to do a medical disembark. The plan was to dock, but after some calculations the captain came rightly to the conclusion, that if you draw 36 feet in 30 feet of water, you run aground. So I was dispatched with a tender to bring the patient ashore. I remember docking near midnight at a small fishing pier on the waterfront and having issues with the local policeman who did not fully grab the concept of a medivac.  So this was the 2nd time, and again on ashore only briefly as I am up to my ears in the preparation for Alaska.

On departure the scene of arrival repeated itself, the pilot was confirmed for 16.30 but again he did not show up. Now based on our morning experience we scanned the port to see if there was anything moving and indeed two ships were coming out and our pilot was on the first one. Again we sailed with 30 minutes delay but as we have a slow run to Puerto Vallarta which is just around the corner it did not matter that much. It had been a nice and sunny day and as the port is open to the seaside, a cool breeze had kept the temperatures to a very pleasant level.

Tomorrow we are scheduled to arrive at 0700 hrs, and I have to dock at the Cruise Terminal, so it will be a longer walk for everybody to Wall-Mart and the shopping centre. Reason for that is that there will be an international triathlon going on in the port. Biking, running and swimming. The swimming part takes place in front of the ship’s bow at Pier 1 going across to Pier 3 dock and back again. It is an international affair as they can score points to get selected for the world (?) championship in London.  The swimming might be interesting as well as there are crocodiles in the water on the navy side of the basin.

I will be at the pilot station at 07.00 hrs. and I know that the pilot will be on time, as I am his only job for the day. 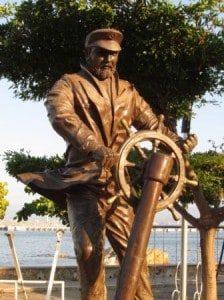 The port has a statue dedicated to (cruise) ship captains, so the local management does have my vote.