The distance is between Hualtulco and Manzanillo is 537 miles and that means it is too far away to reach it overnight and too short a distance to go full speed. I am not familiar with the night life of Manzanillo but it seems more of an industrial port than a resort in the style of Acapulco. Thus I am Not going to run full out to arrive at 11 pm., to give all the guests the chance to race ashore to the nearest disco but sail along the Mexican coast with the sedate speed of 13 knots, aiming for a 07.00 pilot station time. By 08.00 we had passed Acapulco and by 14.00 hrs. we had Zihuatenego on our starboard side. At the same time the wind breezed up to 15 knots and that saw all the sports fishermen returning home wards and giving us something less to worry about.  For other traffic it was quite lively, due to the curvature of the coast here. The major shipping lanes bend around the corner here, following the land and that means that all coastal traffic from North America to Panama comes fairly close to the shore here. Thus we had a good sprinkling of container ships, tankers and general cargo ships coming by. Later on we lost those again when we turned more to the north heading for Manzanillo.

As part of my series of “unsung heroes” working behind the scenes, today a person who really works in the background as his main function is to support the bo’sun with his sailors. It is the Deck store keeper. A lot of maintenance of a cruise ship revolves around painting. Painting in various colors, with varying sorts of paint and sometimes in patterns and letters which need templates.  That is being dealt with by the storekeeper. 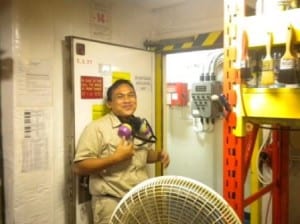 Each day he receives a head up from the Bo’sun for the next day as to what projects will be tackled and how many sailors it will involve.  That means that the afternoon is spent preparing the paints, in small pots (the deck dept. uses a lot of empty dry-peanut cans from the Beverage dept) if small rollers and brushes are to be used; and big cans if it means painting the hull, where large rollers are used. With it comes the individual bottle of thinner for each sailor and the right amount of brushes. When the painting comes to small areas also the masking tape comes out. 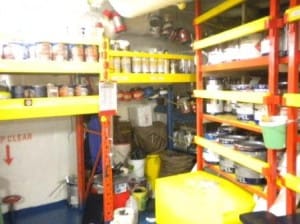 Paints are arranged by color & size but also by the sort of precaution that has to be taken when using them.

Before all the sailors stop working, all equipment is returned and then brushes and other material are put in for a soak during the night. The next morning, after all the new materials for the day have been handed out, the tedious task starts to clean all that material up, so it can be used for the next day. With a 24 hour cycle it means that normally two sets of equipment are in use.

An extra challenge is when items have to be stenciled. Most of the signs we have on board are custom made but we do not have signs for everything. So a lot of (safety) signs are made up by the ships themselves and when they go over 1 inch height, then the storekeeper makes templates. (For the 1 inch or less sized letters we have brass templates bought ashore) This also happens when we need special signs such as for Christmas. “Happy Christmas and Merry New Year” all need special templates.  The preferred material for this is: the old X-ray photo material from the hospital. It can be easily cut with a scalpel (which he also obtains from the hospital) or with a Stanley knife, it is not flimsy but thin and is strong at the same time. 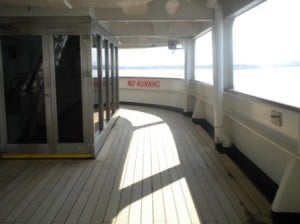 The challenge gets even bigger if the captain wants something. Such as when guests jog on the lower prom deck. That is A. dangerous, and B. a nuisance for the guests with cabins below the deck. Thus big letters were painted in the curve of the deck at the stern.  For that the storekeeper had to make special templates.  Did it work? It does most of the time but occasionally we still have a guest who thinks they can jog on the LP deck, and only have to slow down when going around the corner at the stern.

Tomorrow we will be a Manzanillo, located deep inside a natural bay. It is only one mile from the pilot station to the dock, so I have set the pilot time for 07.00 hrs. and should be docked by 07.30. It is a very sheltered bay and with a cool sea breeze blowing it should be a pleasant day.