During the night we sailed through the Baja California, the stretch of water between the Mexican mainland and the Californian Peninsula. Further up the inlet it is called the Sea of Cortez but here at the entrance to the Pacific Ocean it is the Bay of California. On occasion it can blow considerably from the North with the land on both sides acting as a Funnel. This time it was not so bad as most of the wind was on the bow. There is a strong outflow from the North in the North Pacific Ocean (It is quite horrible weather in the San Francisco area at the moment) and that funnels nicely along the Californian Coast. When it comes to the end of the Peninsula the “funnel wall” in the form of the Californian Peninsula falls away and the wind bends around Cabo Falso & Cabo San Lucas and then blows in the direction of Puerto Vallarta, only to lose momentum when coming close to the Bahia de Banderas. That meant that from around midnight we had the wind full on the bow and it dropped the outside temperature considerably. Midday in Puerto Vallarta had been 85oF (30oC) now it came down to midday 68oF (20oC). Still not cold but chilly after the sweltering weather of the last 14 days.

The whole coast of the California Peninsula was covered in a haze, which looked like sand to me from a distance; most likely whipped up by the northerly wind. As a result we could hardly see anything of the Cabo San Lucas area. Looking at the radar I saw that there were no cruise ships in the port and that all the commercial (sports) fishermen were tucked up in the Marina. We could pick out all the AIS’s of their boats and read the names. Indeed looking at the wind and the sea it was not a day for a small boat to be out there, more a day of sitting in the Bar, telling –true- stories about the biggest catch ever. My concern in this area is always the adverse current and swell. Swell coming all the way from the Gulf of Alaska which can make my guests unhappy as the ship starts to wobble and the current slows us down and then I have to rev up the engines to maintain the speed to make. This time the axis of the wind flow stayed a bit further off the coast and thus by 10 am. the wind started to die off as we moved away from the axis. Thus it remained a good day.

I still have a loose end to tie up, namely what we did with the donations for Fanning Island. You will remember that I had to cancel Fanning Island in December and we kept everything stored on board for the next Feburary call. Then I went home and asked my colleague to take care of it all. The donations on board continued to come in and by the 2nd call at Fanning there was a lot of stuff. Unfortunately the swell once again made life miserable and it resulted in a 2nd cancellation. By now the amount of clothing collected and other goods had grown so great that we could not store it any more on board while staying in compliance with the safety regulations. Thus a solution had to be found. That solution was Father Joe’s Villages in San Diego as they were willing to take everything we had. http://my.neighbor.org/page.aspx?pid=389

The ships HRM went to have a look and she was quite impressed, so the goods found a good home. This year we will try Fanning Island again and also Corinto. But the storage –safety rules that we now have to comply with, means that we have to offload on a regular basis and cannot hold on anymore until we return to a port, so we now have the option of Fanning, San Diego, Corinto and Cartagena.

Tonight we have our Orange Ball in the crow’s nest to honor the coronation of our new King, Willem Alexander. The official day is tomorrow but we cannot throw a party then as it is the last day of the cruise for about 600 guests who will leave us in San Diego. 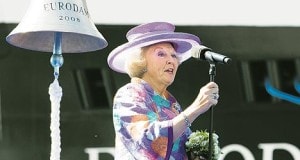 HM Queen Beatrix of the Netherlands baptising the Eurodam in 2008.

No doubt the Queen is looking forward to her retirement, then she can finally go on a cruise.