We sailed late from the port. But then we always sail late from Civitavecchia. Somehow it is impossible to get our guests back in time from the Rome Tour. Partly it is traffic on the motorway, partly it is that the guests come back to the coach at the very last minute, partly it is because the tour just runs late with all the traffic in Rome. So the bridge officers went into the same mental state of resignation as they do that every cruise ship bridge team has done before, just sit down and wait. And thus we waited and eventually the bus was back, and we were not that late, not so late as we had already mentally resigned ourselves to.

It was important to sail on time, or even earlier if possible as it is a high speed run to get to Cartagena on time. So once we were out of the harbor it was the pedal to the metal and a race with 19 knots on a South Westerly course down to the Iberian Peninsula. Our main concern is the weather as by late October it can be very spooky here. But we are doing well apart from a brisk westerly wind; the sun was shining today and is supposed to shine tomorrow.

When going to Cartagena from Italy you have two islands that are in the way. Corse and Sardinia. So you have to go above, under or in between. In between is Strait Bonifacio which is a very scenic stretch of sailing, however in our case we had to go through a 01.00 in the morning to keep the schedule. Nice thing is for the navigators at all the little ferry boats that dart in between the two islands are sleeping and there is no traffic. No pilot either, so the ship goes through with the Captain on the bridge and that is it. 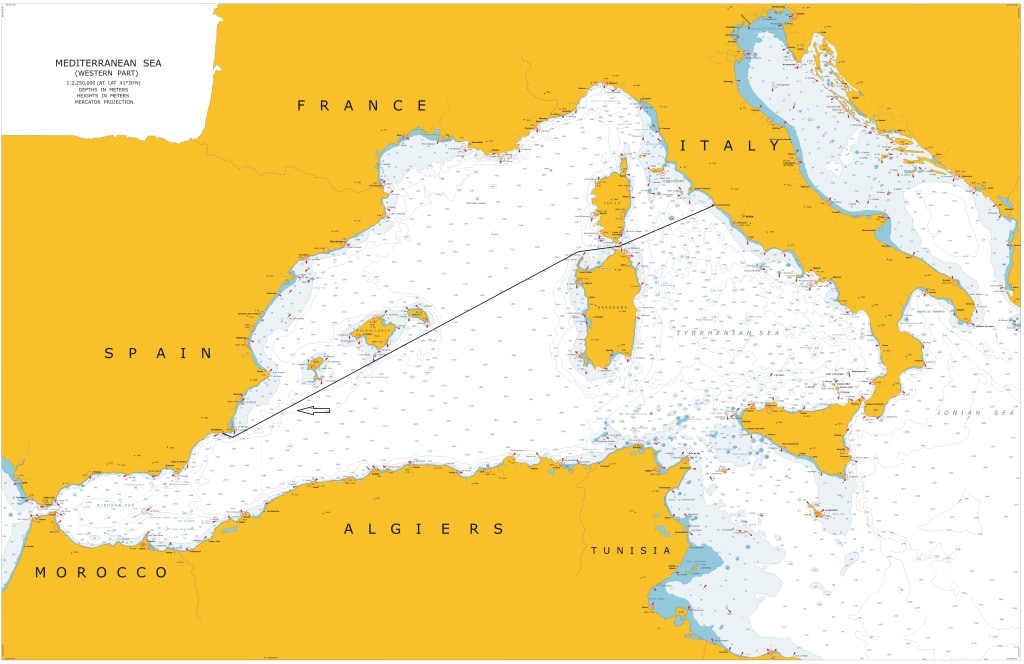 Our Route from Italy to Spain. (Courtesy Her Majesty’s Geographic Office chart 301)

By noon time we had passed the Balearic Islands, coming quite close to Menorca with the cruise port of Mahon. A very nice port to visit but only suitable for ships of the ms Prinsendam size as it is very tight to make the one turn to get inside, followed by swinging around in the inside harbor. Cartagena has a much wider entrance and much larger port, hence we are going there. Most guests do not directly equate the Mediterranean Sea with bad weather. Postcards and photos always give sunny beaches and ripple free blue water but the opposite can be the case. Because it is surrounded by land on all sides (not counting the small hole called the Straits of Gibraltar) there can be land wind from all sides and low and high pressure regions on all sides. Strong sand filled winds coming from the Sahara, cold Etesian wind from the north in the Greece area and Mistral winds coming from the North in the French area. During the summer and winter months when the high and low pressure areas around the Med are quite stable, the storms are fairly predictable but in spring and autumn this is less the case.  And that is of course exactly the period that the cruise ships move in or out of the Med. So cruise ship captains are extra alert when they are transiting this area to ensure that the ship is ready in case the winds suddenly pick up. Today we had not much of a bother. Around noon time it peaked up to 25 knots and then it died down again gradually.

We will keep that pattern as during the night this westerly wind will breeze up again, going up to 25 or 30knots and then remain that way. But Cartagena is sheltered at three sides by mountains so when we go into port then it should be nearly wind still. Weather expected 64oC / 18oC with partly cloudy skies. Should be a very nice day for which is still a very Spanish port.