We were the only cruise ship scheduled for today and thus we could arrive when we wanted and we could dock at any location at the cruise terminal. Cartagena is a very large port. The navy has a large presence here with patrol boats, cruisers, submarines and destroyers and then there is the rest of the port with tankers, container ships, Gas carriers and various off shore installations. The cruise business is fairly new, Holland America went here for the first time in 2002 with Yours Truly in command of the old Noordam and if I had to believe the agent then we were the first large cruise ship calling there. I still do not know if he wanted to make me feel important or if it really was the case. Fact was the cruise terminal was the old ferry terminal with a small pier for a ferry boat.

That first call was quite successful apart from the fact that some of our guests found it hard to visit a REAL Spanish city which shut down from lunch between 13.00 hrs. and 15.00 hrs. But after my visit the port was more frequented and then the authorities built a new pier of 560 meters long so now it can have one big and one small cruise ship, or two medium sized ships. Today we were alone and the authorities allowed a salvage vessel / tugboat to dock at the end of the pier. It did not bother as us we could park the ship right in the middle with the gangway right opposite the now greatly enhanced old ferry building terminal.

Getting into the port is quite interesting, as you have to make an S turn between two breakwaters which nicely keeps the swell out of the port. The pilot boards about a mile south of the entrance and then the ship first makes a turn to port, shortly after a turn to starboard, then goes deep into the turning basin and then turns to port again to dock starboard side alongside. Starboard side is not necessary but it is handy to do, as it takes less time on departure to get out again, as you do not have to swing the ship completely around. 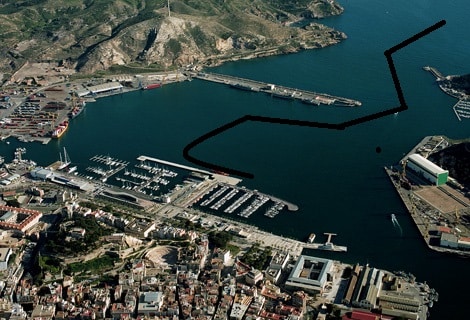 This is our way of Grand Prix racing; around the chicane, then a major turn and then putting the brakes on. This is a photo of when it was still a Ferry Terminal, the pier is now twice as long and acts at the same time as a natural barrier for the Marina.

And so we did this, this morning and the whole maneuver took roughly 70 minutes from pilot on board to gangway out and first guest walking ashore. You pick up the pilot with a speed of six knots and then continue with that speed when making the turns. When a ship turns it is losing a lot of speed. If a ship would commence an 180o turn with six knots, then by the time the ship is facing exactly the other way the speed is almost down to zero due to the friction it gets from the water in the turn. So if you want to stop a ship, then you can give astern on the engines but a few good course changes (or making large zig-zags), if you have the space also helps to reduce the speed very fast.  Thus this morning, the Staff Captain who did the maneuvering today only had to reduce the settings on the Azipods from slow ahead to dead slow ahead and the two course changes brought the speed down very quickly and by the time we were in the turning basin the speed was down to three knots, exactly what was wanted to commence the turn to the dock. 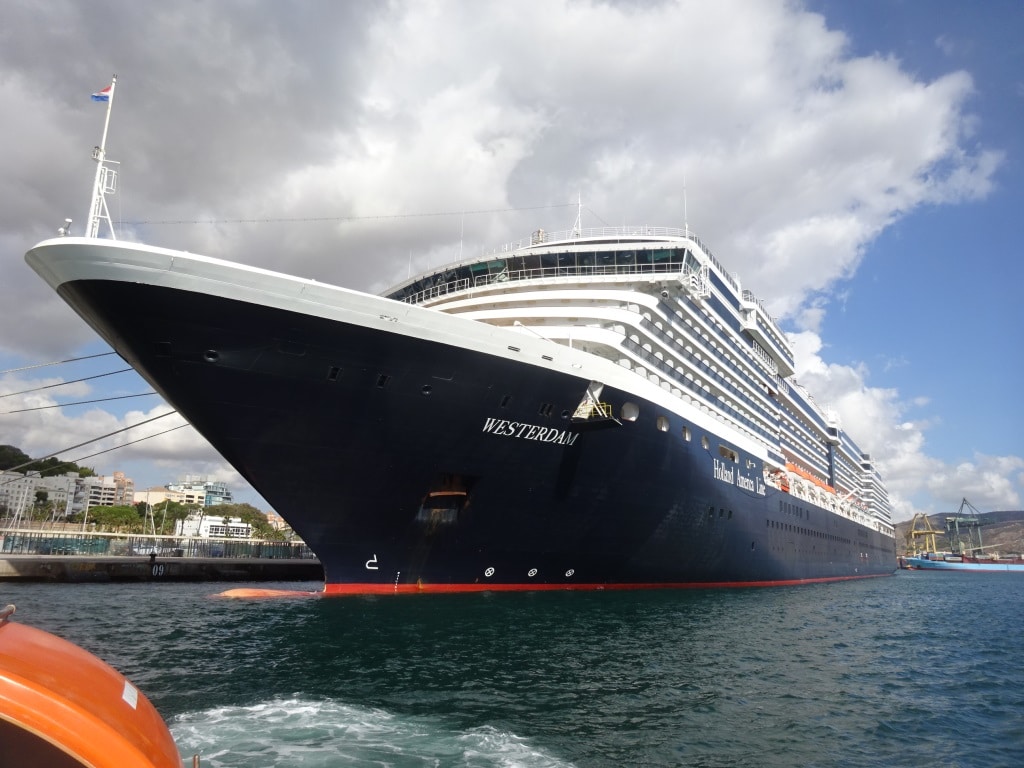 The Westerdam enjoying a sunny day in Cartagena. Photo from the lifeboat as the class had lifeboat maneuvering today.

And then you have to find the perfect spot to park yourself. Today we had one of those mystifying Spanish moments, none of the lights on the shore side worked. The port authority with great foresight had put a car with its lights on at the ideal location for the gangway and the ship approached accordingly. With still about a 150 meters to go, the driver of the car had enough of it and decided to go somewhere else, leaving us a little bit abandoned. Luckily the early part of sun rise started (nautical twilight) so we were able to see the gate in the Cruise terminal building and we could still line up at the perfect position. But if the driver had waited about 4 minutes it would have been a lot easier to use the head lights to judge how far we still had to go…………………

It turned out to be a very nice and sunny day with one big rain cloud hovering over the port for most of the day but it must have forgotten its purpose in life as not a single drop came down on the ship and the port. No doubt somewhere there must be a very unhappy Spanish farmer who had hoped for a bit of rain on its crops. We stayed until 18.00 hrs. and then set sail for Malaga, just around the corner. According to the schedule we are supposed to be in port with one more cruise ship, Mein Schiff 3, but you never know who else might pop up. It should be another warm day with no wind and temperatures of 74oF / or 23oC.