Today we experienced a Norwegian heat wave as the temperature rose to 34oC in Oslo and that even with all the cold water around and in the port. Even on arrival at 07.00 in the morning it felt more like a Puerto Rican arrival than sailing into a Norwegian port. Still for me it is better than the other way around and having to stand on deck with cold toes. Getting to Oslo takes a long time. We had the pilot this morning at 02.15 am and it was not before 07.15 when we approached the dock. Oslo Fjord is 56 miles long and although you can do the first part with about 19 knots, the second port varies between 10 and 15 knots and that costs time. Luckily the scenery makes up for getting out of bed early. With the majority of our guests (families) it is different; they seem to prefer sail-a ways as they all congregate around 08.00 in the Lido before going ashore. I suppose it works easier with the kids. Do something “boring” in the evening creates fewer tantrums, than in the morning when you have to get them all organized. I am not into children but I have the greatest respect for parents. Today I saw a Ma and Pa breaking up a serious alternation between three or four siblings about a soda card. It was really funny to watch the face of the Bar Man who was stuck in the middle. He has two children himself and he knew exactly how to handle this but could not as they were guests and he was a  crew member. Listening to the noise, the lack or abuse of a Soda card was a very traumatic experience for one of the younger ones. For those who do not know, a Soda card is a sort of charge card which only works on soda’s and a lot of parents give one to the kids so they do not have to borrow the cabin key or abuse their own. Works very well and I have seen cool guys buys cola’s for the “most beautiful woman in the world” they just met on the cruise. 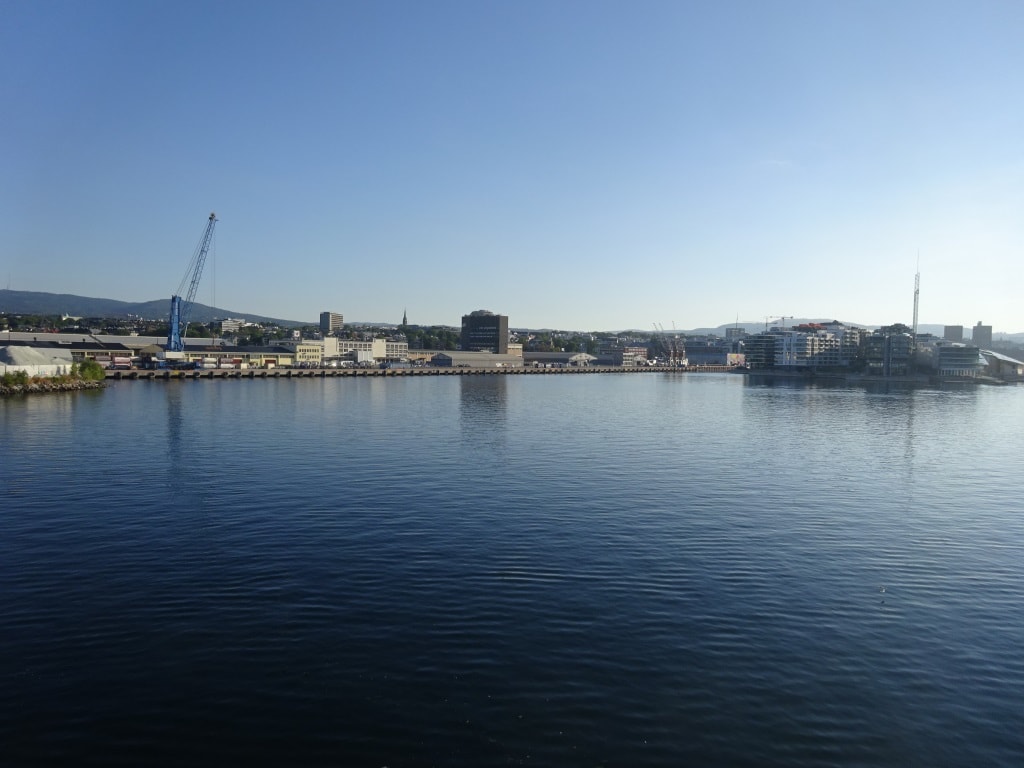 Arrival Oslo. Please note, there is not a single cloud in the sky. As in other Norwegian ports they have started building on all the old cargo docks and here in the middle a large huddle of apartment building has been erected in the last two years.

While the guests were exploring sweltering Oslo, we had something else going on. TOWNHALL. Americans will know what it is, it is when politicians come to the (small) town to press the flesh, ask for votes and sometimes even listen to the audience. Holland America has taken that concept over but not for politics but to come to the crew at sea to explain what the office is up to. Not an easy gig as they do a ship everyday with travel in between as well. Thus we had V.P’s and Directors from Hotel, Nautical, Human Resources, Finance, and Interior on board today, to meet with the ships staff, have a walk around the ship, do target meetings but above all, hold a town hall in the Main stage. 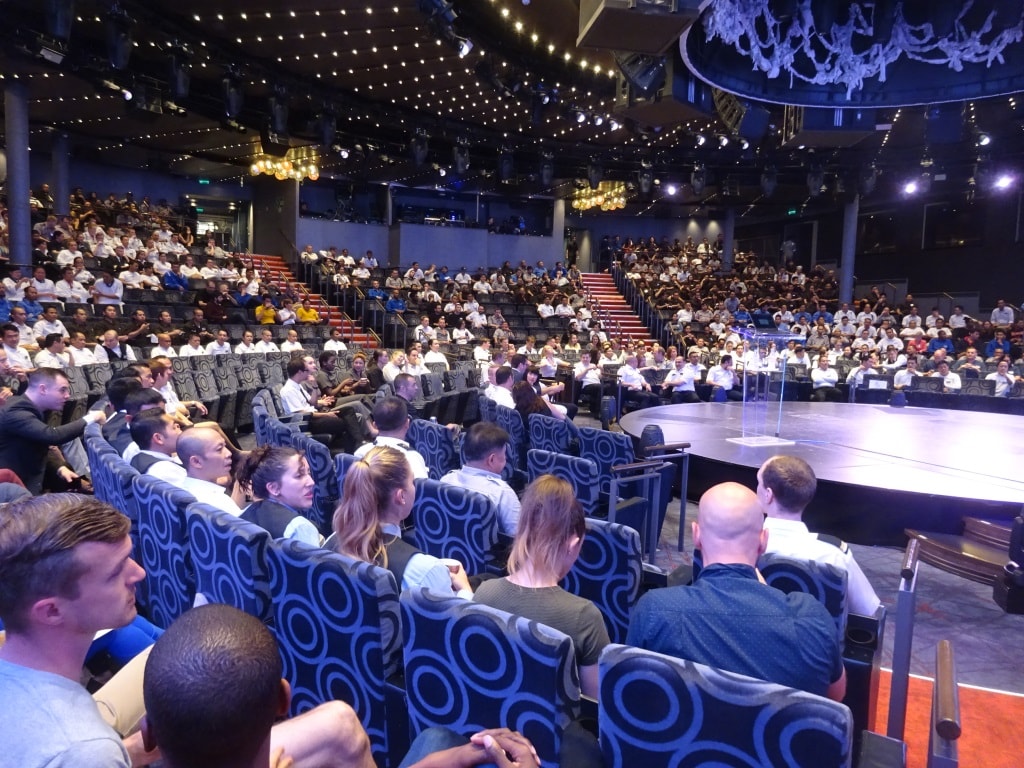 The Main Stage gathering. With 800 crew members on board it is possible to fill all the seats but the (few) guests left on board are still entitled to their service so not everybody is there.

Our company is very good at communicating with the fleet by means of regular email updates but nothing beats a live presentation with the option of Q&A afterwards. Thus was presented to us how the company was doing (doing very well, higher occupancy rate) what the plans for the future were (Nieuw Statendam on time and an expansion of the Music Walk) and what the plans were for the crew. The last one is a very important one, and at the moment, more than ever. The cruise industry is expanding rapidly with a lot of big ships and those big ships need a lot of crew. And the other cruise companies know that Holland America has the best crew, so they are trying to pinch. Most of our crew do not want to leave but they also have families and there will be a moment that there is: “an offer they cannot refuse”. Thus the Q&A is very important for the policy makers to find out what the crew finds most important and most of the time it is not salary as such but often the side perks and conveniences around it. Luckily the trust between the ships and the head office is good enough that the crew really can speak freely and thus there was a good and meaningful discussion to day. 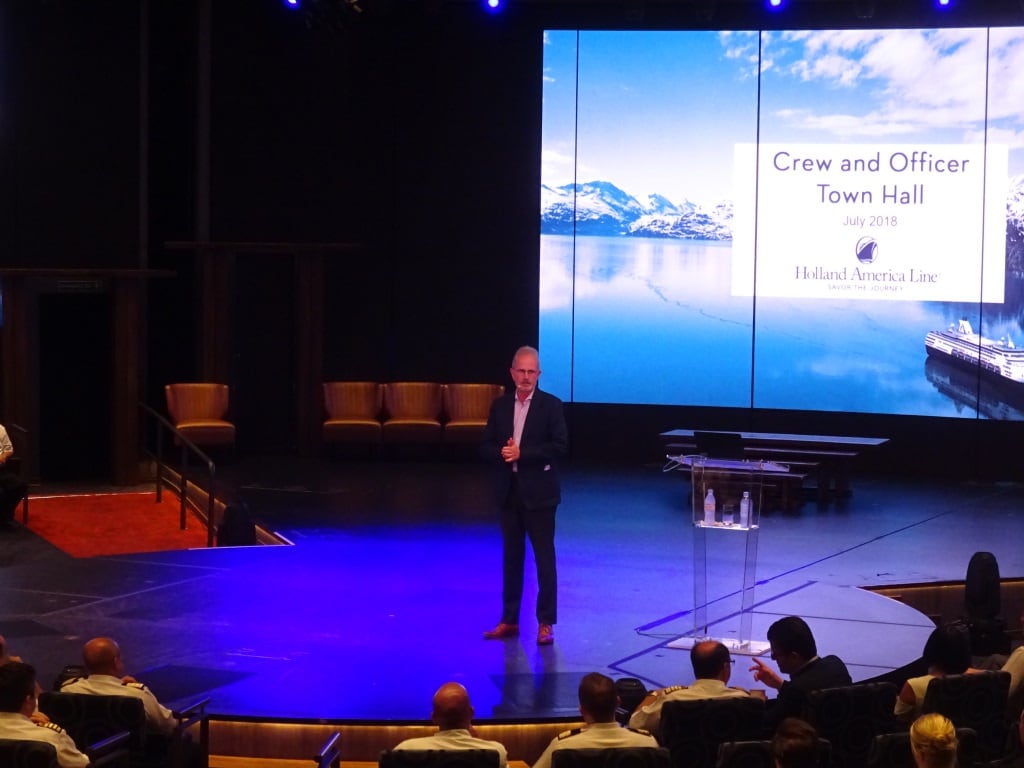 This was our last port of call and tomorrow we have a sea day on the way back to Amsterdam. And there it is supposed to be a bit colder: only 28oC / 82oF. ……… but we will see,