It has been about 8 years since I have been to Kristiansand and I was not impressed with the (nautical) changes. They built a new cruise dock and because (I think) they wanted to save money on concrete; the dock is too small for a ship of the size of the Koningsdam. Although we can have our two gangways on the dock, the ship either has to move aft to have good headlines or to move forward to have good stern lines as there are not sufficient bollards available to tie the ship up in a safe way under all circumstances. Today we have beautiful weather as Norway is suffering from a heat wave but it can blow here considerably and then the situation would not be good for your heart. The old cruise dock has been given over to new apartment buildings and they did not pay for having cruise ship people peering into their apartments so we cannot go there anymore. 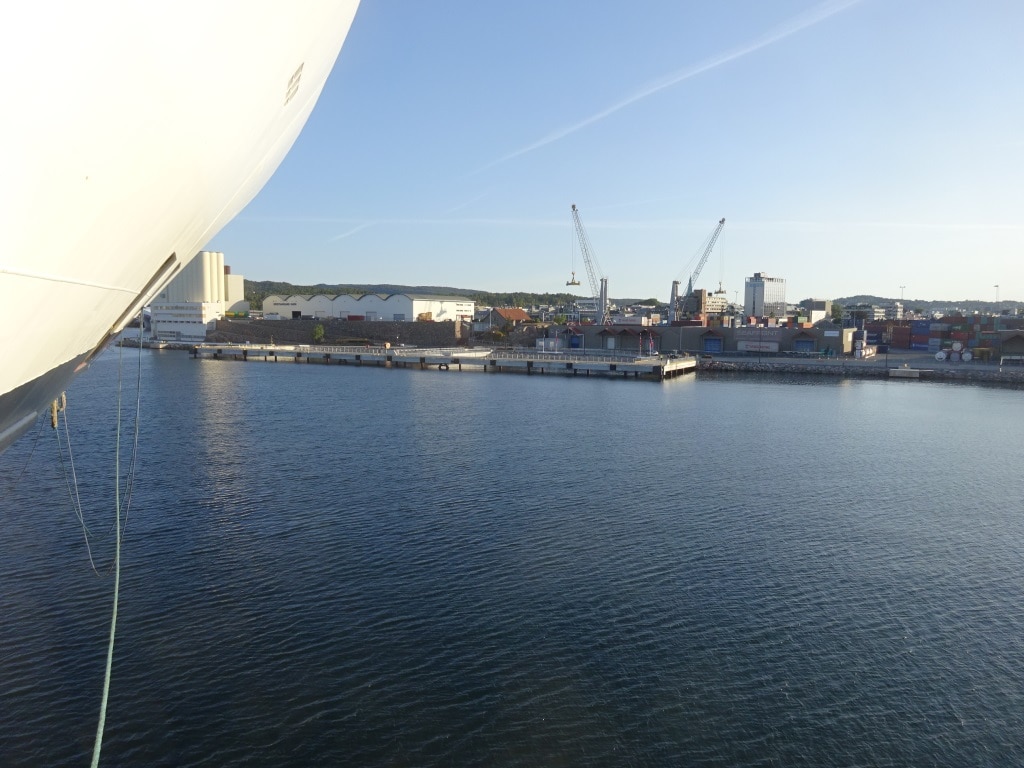 Approaching the cruise terminal as seen from the mooring deck. The port is industrial, not as picturesque as Stavanger but once past one block of warehouses the downtown area is right there.

The town itself is located in a nice big bay and has a large natural harbor where a large size cruise ship can anchor; close to the tender dock and very close to the city. The town is a very pleasant place to walk around in and the soft ice creams are of a reasonable price. For those not on tours, the downtown area is very nice to spend a good amount of time in. For those going on tour, this is our port of call for Norwegian scenery and things from the olden days. Blessed with a picture perfect day guests could have gone on a full day excursion inland and visit original Norwegian towns or go on cruises of the archipelago around Kristiansand to admire the dramatic scenery of the islands and the surrounding area. If you want to get a good impression of “rural Norway” without having to climb up a steep mountain, then this is the place for you. If you want to do something nautical, just behind the cruise terminal is a little museum ship from 1911, which played an important part for Norway in two world wars. 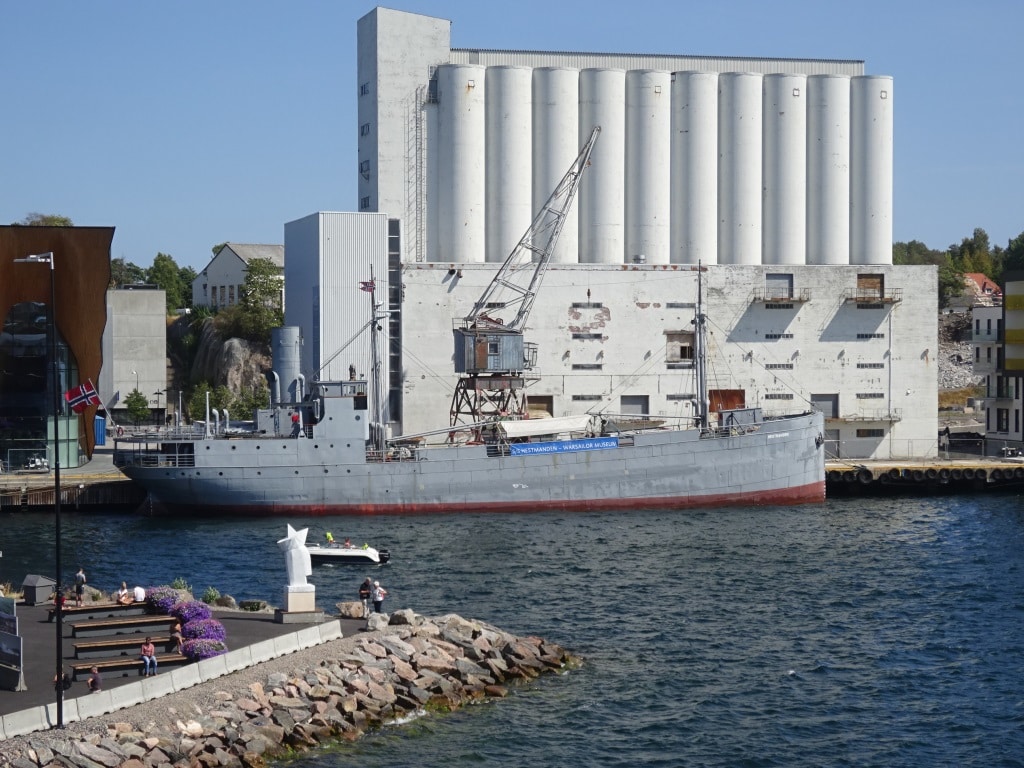 A 195 feet long Norwegian coaster from 1911 has been turned into a museum ship. http://www.hnsa.org/hnsa-ships/ds-hestmanden/

But that is for the guests, the crew were otherwise occupied as it was drill time. In accordance with international Maritimes Law (SOLAS) all crew shall attend at least one boat drill and one fire drill each month. As it is not nice for the guests to shut the ship down while ALL crew are at drill, we have a drill each week so 25% of the crew attends an in-depth drill. Then once a month all the crew has to attend a fire drill. This does not mean that they all have to run around with fire hoses but they have to be part of the evolution. For today the ship had split out the various drills; the fire squads had their compulsory weekly drill and 25% of the other crew went through the motions of dealing with lifeboats and life rafts. 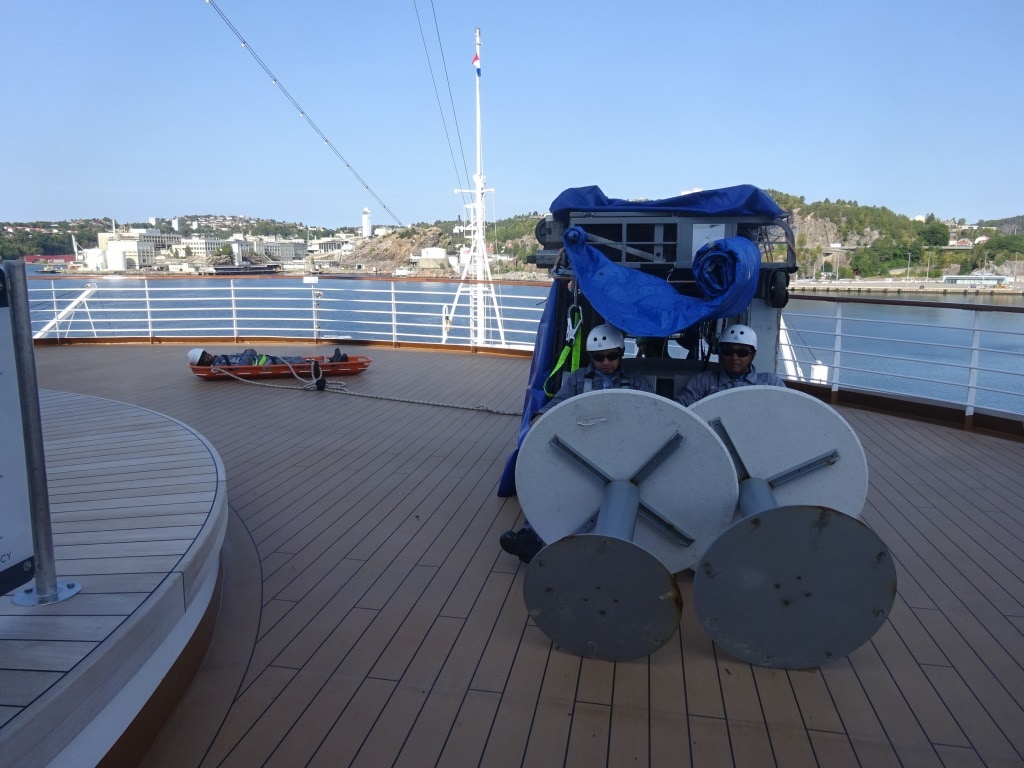 With a bit of creativity you can do a lot with 2 tables, six luggage bins, a bit of tarpaulin and four sailors.

When I am on board I try to offer the ship a little bit more than just the standard drills, simply because I have more time to prepare for something more extravagant. Thus we went for a Helicopter crash on deck. We use helicopters for Medical Evacuations and luckily never has anything happened on any of the cruise ships anywhere. Helicopter pilots involved in this work are highly skilled people and so are the crews of the cruise ships. The pilots drill and train and so we do. Our nightmare is the situation where the helicopter hits the ship during the hoisting evolution and then crashes onto the deck. Although helicopters are made more and more of non-burning material (Kevlar) and have special fuel tanks, it would still be a messy affair. Thus we have to protect the ship and we also would like to save the 4 helicopter crew that is normally involved. So I built a crashed helicopter on the forward deck. With 2 pilots stuck in their seats, the winch man stuck in the back and the patient in the stretcher having crashed back onto the deck again. 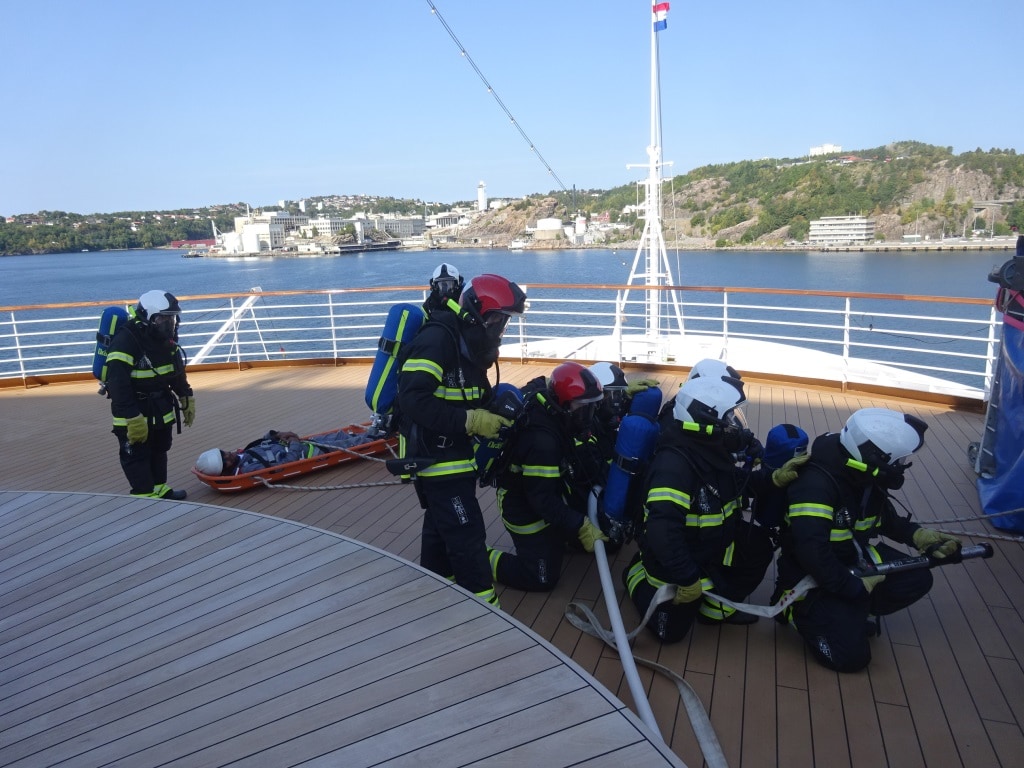 Two teams in position. One with water and the other with a foam hose. The fire fighter standing up with the red helmet has a thermal imaging camera ($ 10,000 worth) and will check for all fire is out. Then they can release the hoisting wire of the stretcher and remove it to the medical team waiting in a safe area. The other casualties were more of a challenge as they had (simulated) burns, broken legs etc.

Once the area has been made safe by two fire teams (And two teams a deck higher who protect them with extra water & foam hoses), the rescue of the four crewmen can start. Afterwards there is a debriefing where each detail is looked at for lessons to be learned and skills obtained for future use.

Tomorrow we are in Oslo, which is the last port of our cruise. Oslo port is close to down town and here the focus is on shopping and local sightseeing. I heard today a few ladies getting highly excited about the shopping prospect and the Gentlemen considerably less as Norway is not cheap.