I had been waiting for it: warm weather brings low hanging clouds, very low hanging clouds. And while approaching Stavanger a white woolly world descended upon us and did not clear until we were almost in the port itself. And thus the fog horn wailed its warning every 2 minutes over the waters advising everybody that we were out there as well. Most commercial ships now have so good radars that it makes a sound signal almost obsolete, were it not for the small craft out there for whom it is not compulsory or who are just too small. The warmth of the port did then help to burn it all off very quickly. 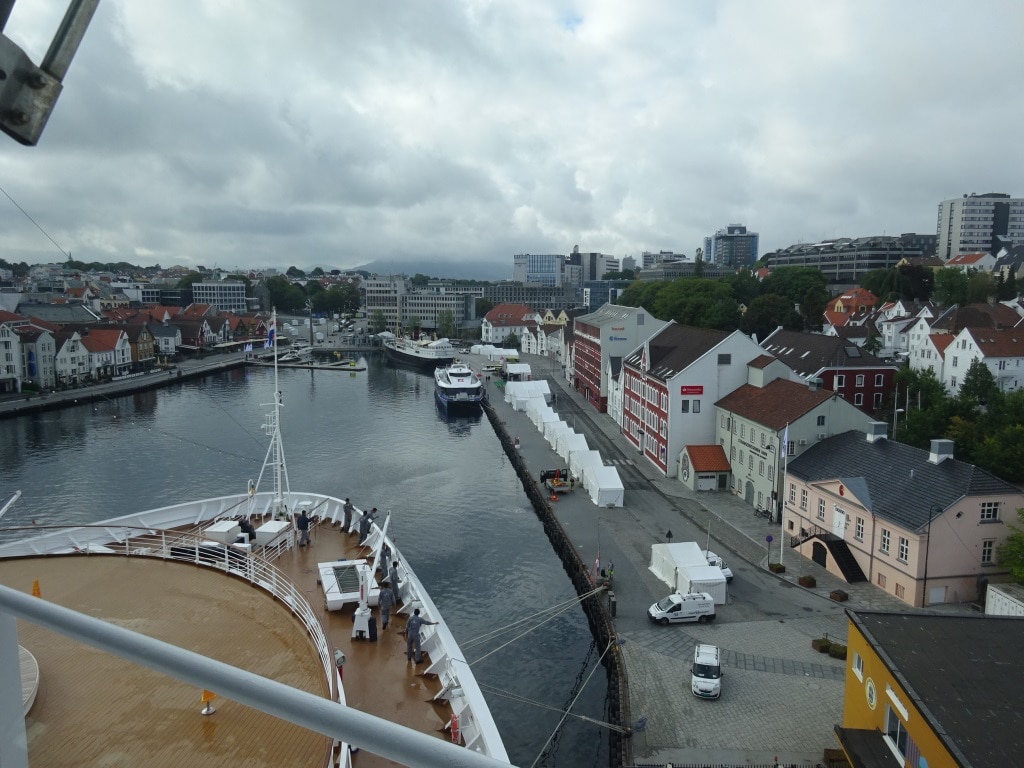 Early morning at 08.30. Not too many people around yet.

We docked at the same spot as on the 20th. of July only now we went bow in as that worked out better for the 2nd ship, The World which came in shortly afterwards. For those who do not know what The World is, it is the only large apartment cruise ship in the world. A sort of floating country club and owned by those who have an apartment on board. Once every so often they all vote on where they would like to go (or where they NEED to go to be seen in the appropriate places) and then the captain cobbles a schedule together. So there must have been a decision to go to Norway for one reason of the other as the ship is now here. Maybe it was the Party-Fest around the old port the reason as it is still going on and even expanding as some larger eat & drink locations have been erected. Including a sort of Beer Garten with a fisherman theme. But as I find paying 10 dollars for a beer a little bit over the top (Norway is not cheap for booze), I joined the deck officers on the bridge wing and we observed it all from high above. 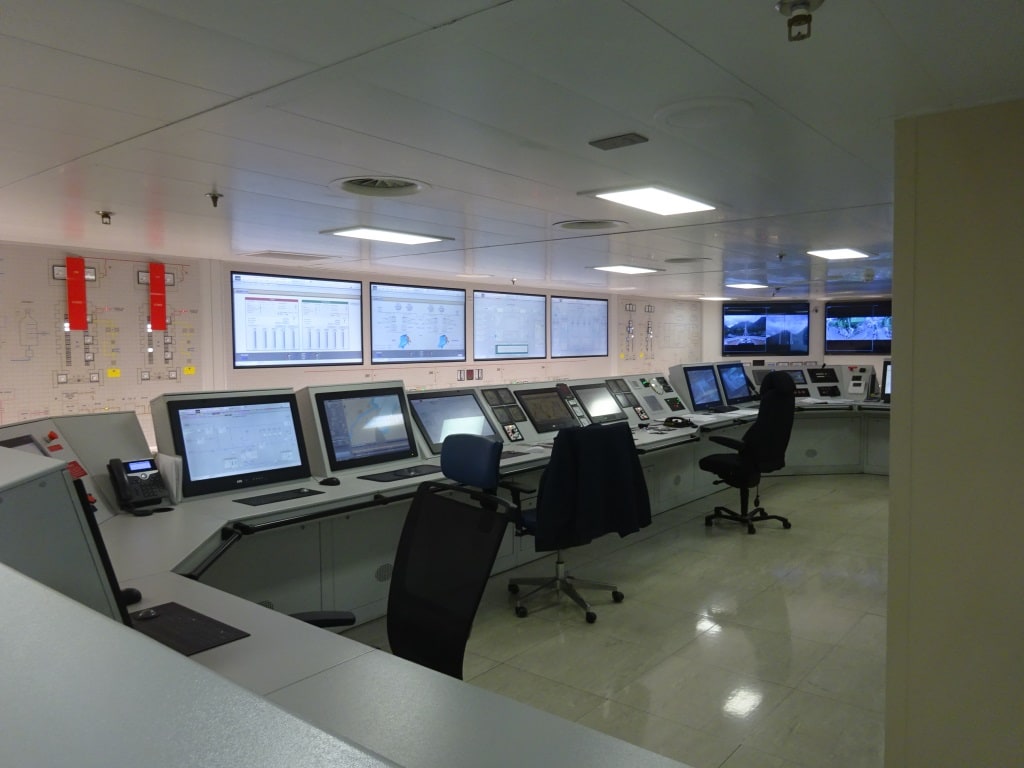 The Engine Control Room port side. Showing the Main maneuvering stand. The two red boxes are the :Lock out – Tag out protection, which means these engines are not on priority standby.

Today a little bit about the technical happenings in the ship. Yesterday we put medical inside a water tank and while we did so it was all carefully monitored from the Engine Control Room. Nowadays there are camera’s everywhere so one single person can keep a complete engine room fully under control and direct a 2nd person in the engine room to where human attention is needed. I put the emphasize on the word person as the days that it was only men who were engineers are long gone. More and more Ladies are filling the ranks and we have a female Staff Chief Engineer in the company, who will make Chief Engineer in the not too far future. 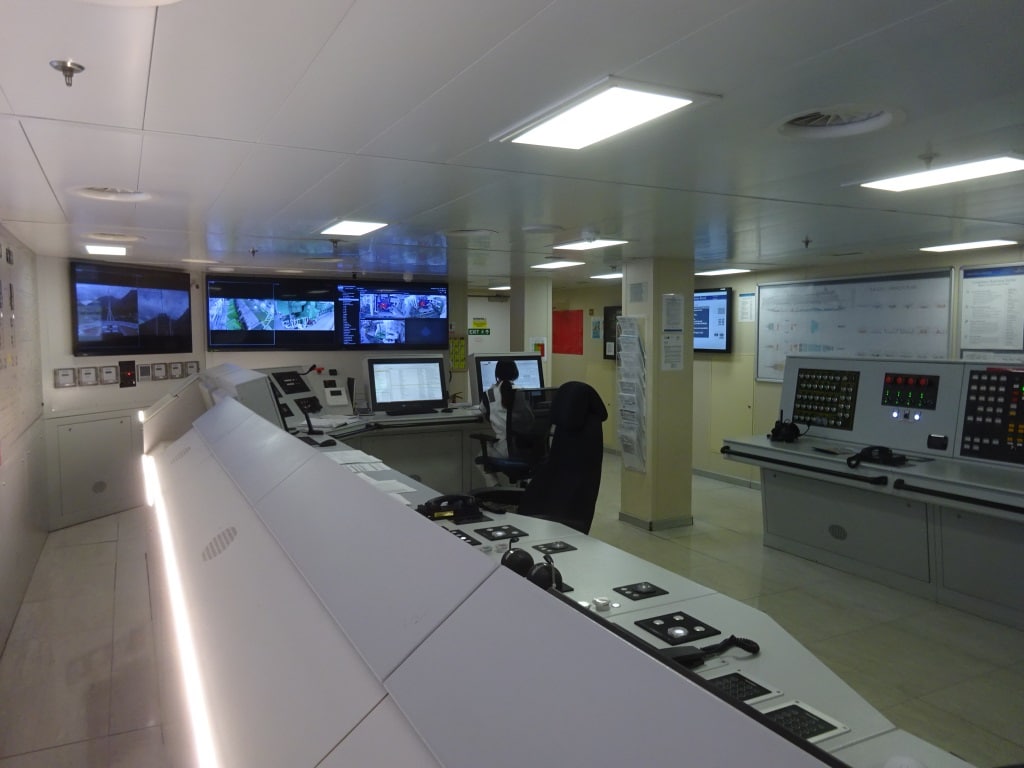 The starboard side of the ECR. Where the Engineer of the Watch monitors everything via computer screens but also large TV banks which switch location every 10 seconds or so. The buttons to the right are the shutdowns for the ships ventilation.

While we were downstairs giving medical a hard time, we were carefully monitored by a Filipino 4th Engineer in the Engine Control Room. As we have a hard time filling all the ranks with Dutch, British and engineers from the Balkan, we now also recruit for engineering officers in the Philippines. Philippine crew came first to Holland America in the late 70’s in skilled petty officers jobs such as carpenter and upholsterer. Then in the mid 80’s they came as cooks and as bar tenders and then they also popped up in the Front Office. In the early 2000’s, the quality of the engineering schools in the Philippines was raised to the level that they gained recognition from the Dutch Flag State licensing authority and now they have the option to join Holland America as well. And also in the Philippines ladies opt for engineering jobs.

The engine room of the ms Koningsdam is almost completely automated. Everything can be monitored and operated from a keyboard in the Engine Control Room. So the watch keeping downstairs consists of walking around to see “why it still works” and to ensure that it keeps working or to carry out repairs. With a new ship the number of mechanical repairs is not so great but as everything is electrical, changing PCB’s and related is much more prominent than it was in the past. The ship has four main engines, from the German brand MaK, which produce a maximum speed of 22 knots. This means that we normally can do our cruises on 2 engines, have 1 on standby and one under maintenance.

The Engine room in simple lay out. Four main engines, each connected to an Electric Generator. In converters the electric energy is transformed into a maximum of 21 MW power for each Azi Pod which takes care of the propulsion. Some of the electric power generator is diverted for operational ships use. Making available power sources of 440 V, 220 V, 110 V, 24 V and 12 Volt.

We will sail from Stavanger around 18.00 hrs. if we leave on time, as no doubt the guests will want to linger as long as possible in a port where so much is going on, with such good weather. But then we sail for our next port Kristiansand, west of Oslo. There is also a port called Kristiansund but that port is somewhat smaller and thus one of the Prinsendam specials. At least if you want to dock in downtown.

Weather for tomorrow: A sunny Norway day with temperatures around 25oC / 77oF. Good for me as I am facilitating a helicopter crash fire drill on the outside deck. 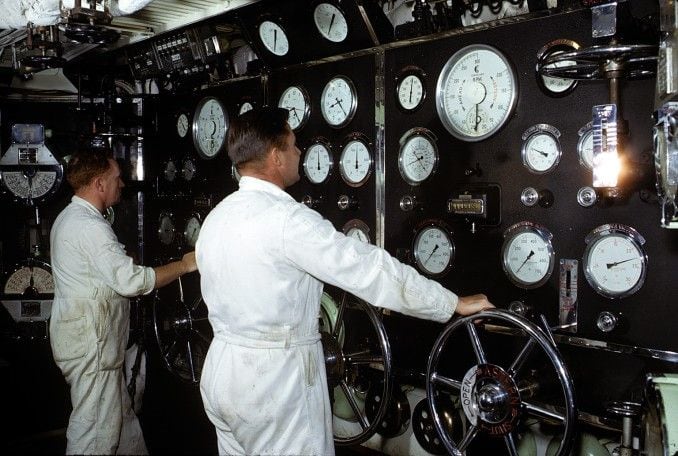 The good old days. When strong men turned the wheels that let steam into the turbines. No air conditioned Control rooms and simple clicks with the computer mouse. Guts, Brawn, Muscle, Perspiration……… and going deaf from the engine noise.