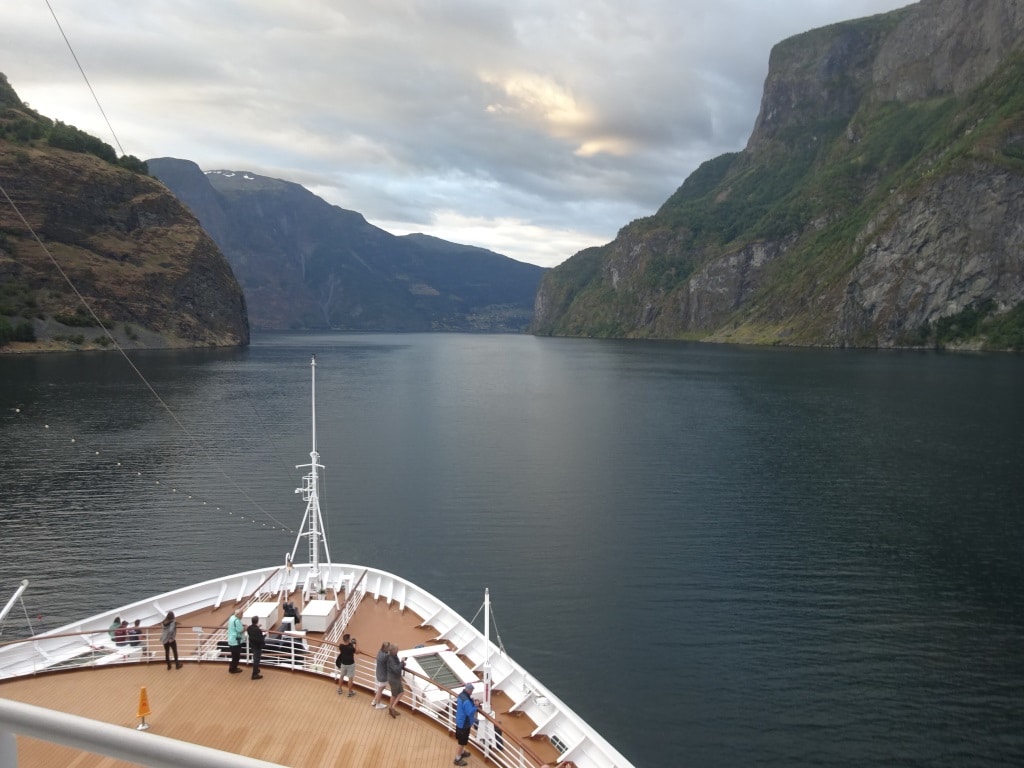 Sailing into Flam. This is the last turn before we arrive at the end of the fjord where Flam is located.

Flam is located at the end of Sognefjord and that is a long way in. For the first part it is quite wide and the ship can run at sea speed after boarding the pilot. Then it gets more and more narrow near the end, that is where it gets very scenic, and the speed has to come down to 15 and then to 10 knots. This reduction in speed has to do with not creating waves as there are boats moored at the various hamlets en route but also not to upset other floating items such as kayakers which can we found here all over the place and not all of them took their common sense with them when jumped into the kayak. 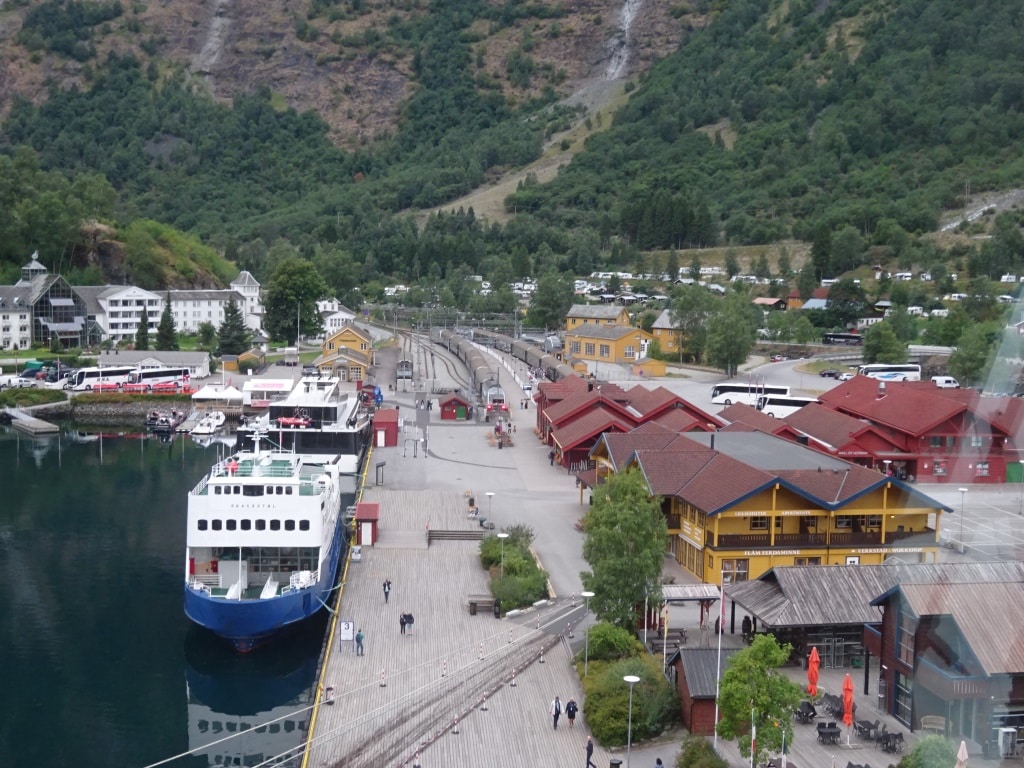 This is basically the whole town. all centered around the railway station. The trains are ready to take all the guests coming from the ship. You can do a 7.5. hrs. tours, a 3.5 hours tour and a 2.5 hrs. tours -un escorted. the long one is part coach trip and the shorter one includes lunch at the top of the mountain where the train stops to go back down again.

In Flam the focus is on the railway so it is our pure shore excursion port. In the coming days we have Kristiansand, Stavanger and Oslo where guests can do their own things and get about all over the place. Here in Flam it is more limited. There are souvenirs shops, eateries and restaurants but the main idea is to go on the train (Flamsbana) or take a shore excursion by Coach. The bus tour takes you inland and to local visits but also to have you experience the Stalheimskleivane which is the steepest road in Norway. I have done that tour in the past and if Norwegians say that the road is steep, believe me it is steep. It also offers some very nice pieces of scenery (horizontally and vertically…………… straight down) 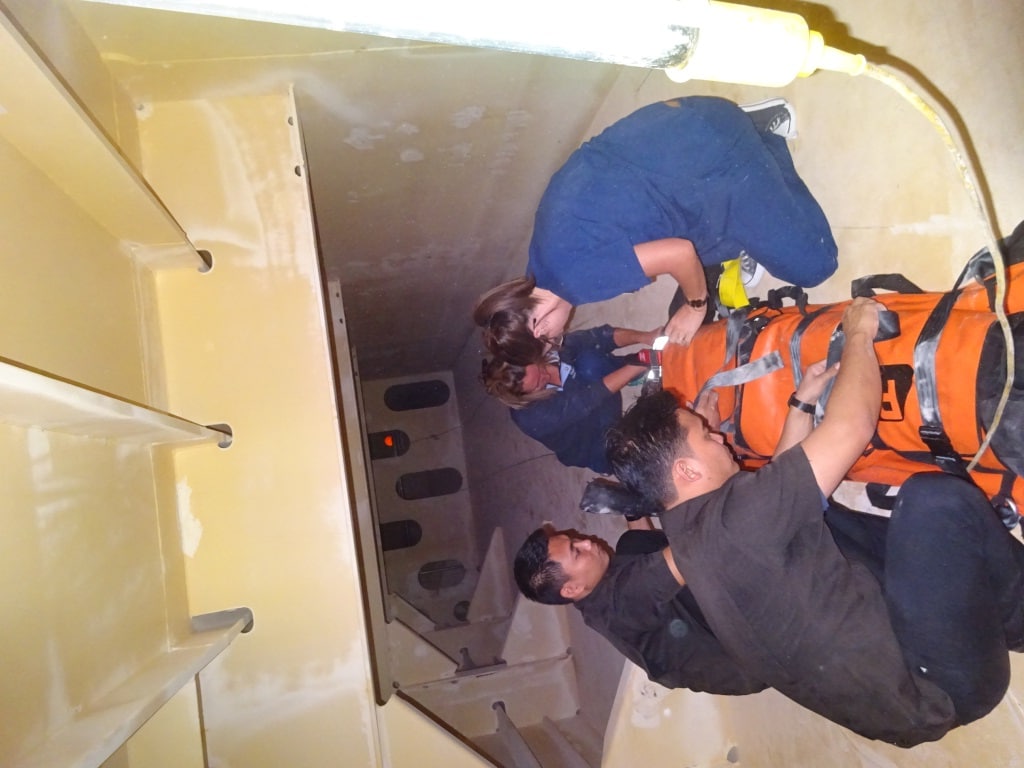 We can still surprise the medical department. None of them had ever been in a tank before. Mr. Dummy was very well looked after.

While the guests are doing their best to fall out of the train, to fall off the Cliffs and to fall in the Fjord (we have had that all happen in the past), ship side dealt this morning with somebody who had fallen in a tank. Simulated. One of the most dangerous activities on board is tank cleaning and we have to do it once in a while. For structural inspections or to get sediments out which had settled down after long periods of use. Oil tanks are particularly nasty but also ballast water tanks as the seawater we pump in is not always pure.  The Koningsdam is only 2 years old and thus cleaning is not an issue yet but inspections have to take place.

The engineers had potable water tank nbr 1. empty for quite a while and also open for quite a while and thus it could be considered a regular space in the Engine room as long as we took precautions; as there is normally only one way in and out. But what an opportunity to do a tank extraction with a casualty and give medical a chance to get familiar with the inside of a tank. In a real situation, we will not even let them get close but this time they could see what it really looked like, what sort of injuries crew could sustain in there and to exercise how to get a stretcher up the stairs. There is nowhere in the ship safety construction regulations that engine stairs need to be wide enough to accommodate a full stretcher team so it can be challenging. 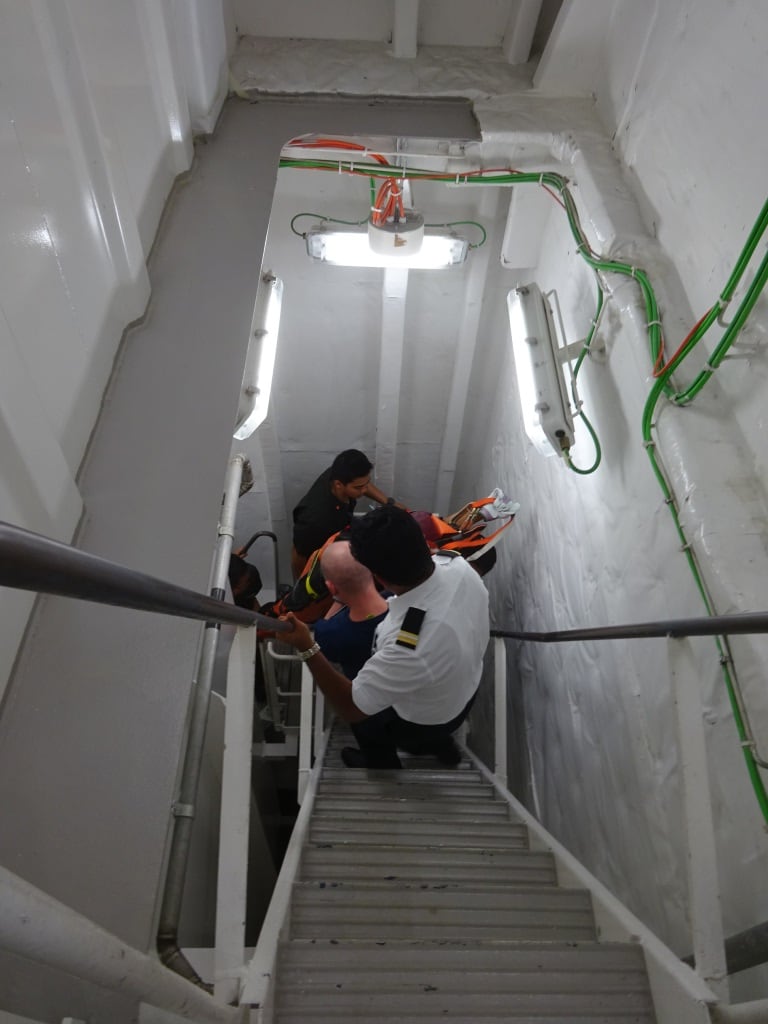 And this was the hard part. First a 90 degree turn and then climbing up a steep staircase with a dummy weighing 160 pounds (approx. 80 kg.)

And thus we put the dummy in the tank, got the stretcher in, let two very excited nurses have a go as well and then got the stretcher with the dummy on it out. As was expected carrying the stretcher up the stairs was the hardest thing of all. We have techniques for that so if the stretcher bearers would let the stretcher slip, it would not go bouncing back down again, but a lanyard anchorman going ahead of the group would stop the slipping. In our exercise we used the full stretcher team, in reality we would probably use four strong engineers working two by two to get it done faster……………. But if all the engineers would be occupied in another emergency then the housekeeping stretcher team would still have to do it. So we train and exercise.

The good ship Koningsdam will sail at 17.00 hrs. and for those who did not make it this morning during the sail in, they now have the chance to see the impressive scenery during the sail out. We have to sail all the way back to the entrance and then enter the next fjord to sail back in again. Next port of call is Stavanger.

This was the last port of call, when we sailed south back to Amsterdam. This time we are expecting more clouds and maybe a little drop of rain in the morning. Temperatures 68oF or 21o C.